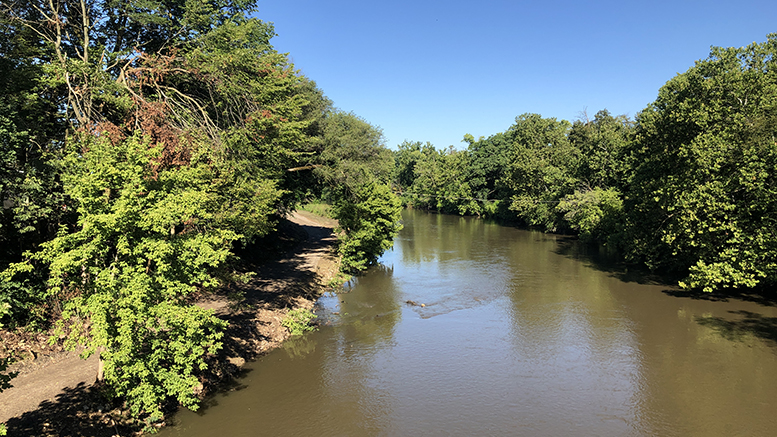 The new trail starts at the Cardinal Greenway near the McCullouch Trailhead on the south side of the river continuing on the levee to the High Street Bridge.  The trail will pass under the Walnut Street Bridge. The levee trail is stone. The trail is one mile long.

The Sanitary District has been able to use the cost of the Army Corps of Engineers mandated levee updates as matching funds for the cost of the trail project.  One example of this is a deficient concrete flood levee wall that required more dirt to prevent the wall from failing during a flood.  The levee wall is located between Elm and Jefferson Streets. The dirt embankment needed to protect the wall will become the base or bench for the levee trail.

The Sanitary District has made other significant levee upgrades between High Street and the Cardinal Greenway over the last 8 years. The central levee protects the entire Mckinley neighborhood and Muncie Central High School campus.  Should this section of levee fail in a flood, Muncie’s only high school would be inundated with river water. It is estimated that the full replacement value of the High School campus could exceed $30 Million.

“If the levee is not in compliance with the Army Corps of Engineers, all property protected by the levee that has a federally backed mortgage would be obligated to pay flood insurance.” Smith explained.

The most significant levee upgrades to the central levee that the Sanitary District has had to make to satisfy the Army Corps mandates are:  1. Replace the City’s main interceptor sewer pipe that passes under the levees near Wheeling Avenue and the football stadium.  This was completed last summer; 2. Remove trees from the levee.  This has been completed over several years; 3. Purchase and remove homes that were built into the levee or were too close to the levee.  Completed over the past six-years; 4. Complete replacement of the concrete levee between Elm Street and the Cardinal Greenway. Completed in 2018.

While replacing the interceptor sewer pipe under the river near Wheeling Avenue last summer, Bowen Construction, discovered that the sewer pipe had been severally damaged.  One of two main sewer pipes under the river had collapsed.  The contractor found a large piece of concrete had fallen onto the pipe during the demolition of the High Street Bridge when it was last rebuilt by the County about 20 years ago.

“Muncie is extremely fortunate that this broken pipe was discovered.  It’s a bit of a miracle that the collapsed pipe under the river was not releasing raw sewage into the waterway.  The broken inceptor pipe delivers all the sewage for every home and business east of Walnut Street, including the regional wastewater areas near Selma, to the Muncie Sanitary District’s wastewater treatment facility on Kilgore Avenue.” Explained Joe Evans Sanitary District Board Member.

Bowen Construction replaced a section of concrete levee near Elm Street in 2018 as another component of the Army Corps compliance directives.  The replacement of this levee required the Sanitary District to purchase and demolish many homes.  The old concrete levee was built by the City about 1908 for $5000.  This was the first substantial levee built by the City of Muncie in response to a flood around 1903.  When this levee was built, it was believed that it would prevent the McKinley area and parts of downtown from flooding.  Because of the age of this levee and the poor engineering of the concrete footer, the Sanitary District was forced to fully replace the concrete wall with and earthen levee to meet the new Army Corps levee standards.   The levee was replaced while the McKinley neighborhood sewers were separated to meet an IDEM requirement.

The Sanitary District Board of Directors established a long-range multi-year plan to slowly bring the Muncie levee flood protection system into the Army Corps compliance.  The Board decided that whenever and wherever possible, sewer separation and levee upgrades would be combined to bring substantial cost savings to construction of these expensive capital expenditures.  The McKinley neighborhood is an example of how the District combined the required sewer and levee mandates to create overall savings for the rate payers.

When the opportunity presented itself that a trail could be added to the levee repairs by using a grant from the DNR, it was an easy decision for the Sanitary District to fix the levee, separate the sewers improving the health, wellness and quality of place for Muncie, especially in the area around the high school.”

The Sanitary District has prioritized the levee projects based on protecting the greatest amount of property value.  The Central Levee was the first priority because of safeguarding the High School.  The second priority was the wastewater treatment plant.  A levee failure at the wastewater plant could result millions of gallons of raw sewage being released into the river.   The third priority has been around the Kitselman Trailhead. Future priorities will be along White River Boulevard west of Wheeling Avenue.  This is the only section of levee in Muncie that did not show the high potential for catastrophic failures as determined by engineering studies.  The Army Corps still will require repairs along White River Boulevard in the coming years.

The Sanitary District Board has used the sewer separation and levee mandates to leave the neighborhoods better than they were before the mandates are implemented.  This can be seen on Walnut Street downtown, the downtown hotel, Ivy Tech, Riverfront Development, Madison Street underpass, Luick/Raible streets, Hoyt Avenue and the central levee/McKinley area, to name a few recent focus areas.  The Sanitary District is currently working hard to boost the Whitley area on Martin Luther King Boulevard with the new Sanitation building and the storm water improvements on Elgin Street and McGalliard Road.   The Sanitary District is helping with the Riverside trail as well.

The synergy of the Central Levee Trail has resulted in additional funding from the Ball Brothers Foundation in a rapid grant to the Muncie Action Plan to add a critical trail connection that was not included in the DNR grant to the Sanitary District.  The Muncie Action Plan will be adding a short trail leg that will connect the Walnut Street Bridge pedestrian walkway to the central levee trail at the south west corner of the Walnut Street Bridge.

“The Muncie Sanitary District has a long history in making neighborhoods better with every capital improvement project implemented. It is especially important for the Sanitary District to help the White River in Muncie.  The river is a place where all people can enjoy fishing, paddling, walking, jogging or biking.  The Sanitary District mows the river, it checks the water quality every day and reports when it is too dangerous to be in the water after heavy rains.

While the water company removes water from the river on Burlington Drive for all of Muncie to drink, the Sanitary District is discharging that used, processed and clean water back into the river near Hawthorn Drive. The Muncie Sanitary District has been, and will continue to be, Muncie’s longest and most continuous partner in the construction of the White River Greenway and the use of the White River by all. The Sanitary District could not be more excited to see people using the new Central Levee trail every day.  “We see people using the trail for soccer games, cross country, track or employees of downtown businesses walking on the levee trail at lunch.  In the time of COVID, the trails are a great place to enjoy nature while social distancing”, said Bill Smith, Muncie Sanitary District Board President. The levee trail was designed and being built by FlatLand Resources of Muncie.

The Muncie Sanitary District (MSD), created under Indiana State law in 1968 by the action of an Ordinance of the City of Muncie, Ind., provides services to the public in the areas of code enforcement, engineering, sanitation, sewer maintenance, storm water management, water pollution control, and recycling. In addition to these services, the MSD maintains a statewide position of leadership in green infrastructure through its commitment to programs and initiatives that make the Muncie community a better place to live.