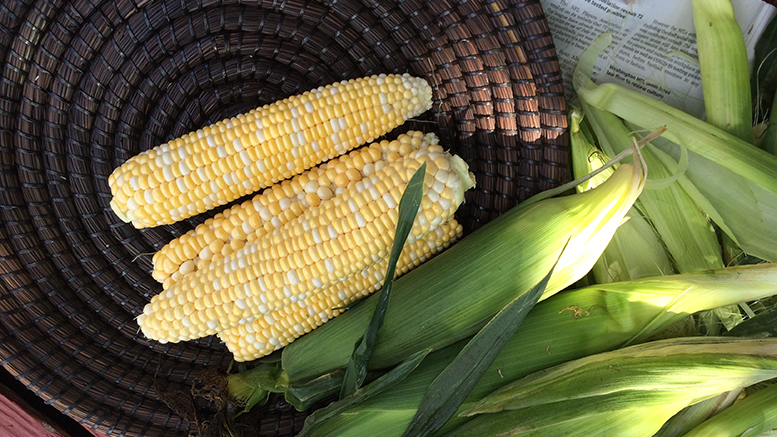 Enjoy corn-on-the-cob any way you want! Um, within reason. Photo by: Nancy Carlson

When it comes to life’s simple pleasures, it’s hard to beat corn-on-the-cob.

Maybe not for everyone, though.

Whether it’s for genetic, physiological or psychological reasons, these days you can find somebody somewhere who is allergic to literally any food you’d care to name on God’s green earth. Broccoli, gravy, croutons. There are probably people out there who spend their lives in fear of fatal encounters with a Milk Dud.

That being the case, you can surely find somebody – maybe lots of somebodies – who at the very mention of corn-on-the-cob break out in hives.

But not most of us, including Nancy and me.

We’re simple people, culinarily, so when ears of corn are selling at our favorite farm stand, Nancy tends to buy our share or more. For a stretch of weeks, corn-on-the-cob dominates our menus. How do you prepare yours? Boiled on the stove and slathered with copious amounts of butter, then generously seasoned with salt and pepper?

Yeah, the simple way. God’s way. That’s how we like it, too.

But then I know folks who prefer cooking it over a charcoal grill or an open fire. While we don’t cook it that way ourselves, I always try to remember this is America, so live and let live, people. It’s perfectly acceptable.

Then there are folks who, forsaking butter, prefer their corn-on-the-cob slathered with mayonnaise.

What do we know about these folks, besides the fact they are apparently Satan’s spawn? Isn’t that enough? Who was the first heathen to think, “You know what’d go good on corn? Mayonnaise!” I hate to get all preachy about this, but if God meant for us to spread mayonnaise on corn, wouldn’t corn stalks come attached to chickens? You know, since eggs are mayo’s primary ingredient? Sure they would!

So let’s review what we know so far.

But while we’re pondering the promise of eternal damnation for flaunting the Almighty’s corn-preparation preferences, we might as well address a couple more negatives. First, while it’s delicious, corn-on-the-cob does tend to spread a sheen of salty, peppery, buttery gunk all over one’s face. Besides being messy, among adolescents it’s a root cause of exploding pimple populations.

This was never a deal-breaker for me as a young corn-on-the-cob addict, however, because there weren’t any girls who would go out with me anyway. Consequently, in the total scheme of things, a face full of zits seemed like a perfectly reasonable trade-off.

But corn ravenously chewed from the cob also – and this is the second problem – sticks between your teeth.

This didn’t seem so bad either, until about my fourth year of retirement. But one morning I woke up and grinned into a mirror at how it seemed I finally had life whipped. Then I gasped. Overnight somehow, between my two bottom front teeth, I’d grown a gap you could practically pass a hotdog through!

Now during corn-on-the-cob season, I’m always getting multiple kernels wedged in there. If I could just train my tongue to work them out one kernel at a time, I could snack on them all day long. Alas, I usually end up digging out the entire kit-and-kaboodle with my Swiss Army knife, then down this glob in one corny gulp.

By the way, now that I’ve calmed down a bit, I’ve decided you’re probably not doomed to an eternity of treading water in Beelzebub’s fiery lake just for smearing your ear of corn with mayonnaise. There are perfectly good people out there spreading mayo on their corn cobs, I’m sure. Well, pretty sure. Another plus: Medical science has yet to establish a connection between mayonnaise and zits. So I guess I just got a little carried away, folks.

Besides, further intensive corn-on-the-cob research with my personal French chef, Monsieur Google, has revealed a wonderful new world of exciting corn-on-the-cob preparation possibilities, if only we are adventurous enough to try them.

Then there’s Cajun corn-on-the-cob and Mexican corn-on-the-cob, courtesy of the spices you rub on your ears. Your corn ears, I mean. And there are also alternative cooking methods such as wrapping the ears in wet paper towels and microwaving them, and even boiling them in milk, either regular or buttermilk.

Also, in a recipe that brings tears to my eyes because it’s so beautiful, there’s corn-on-the-cob wrapped in what’s generally considered nature’s perfect food.

Finally, and this is mighty interesting, I learned there are people who like to spread their corn-on-the-cob with peanut butter and jelly.

Tell you what, if you eat your corn-on-the-cob that way, once you eventually get down to where you’re bound to end up for the rest of time, tell The Prince of Darkness I said, “Hi!”