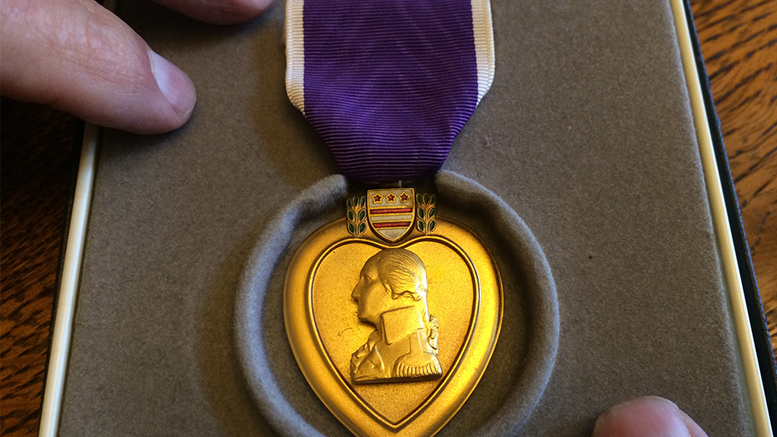 The Purple Heart stands as a symbol of sacrifice. Photo by: Nancy Carlson

It might sound absurd, but as Memorial Day approaches, I find myself thinking about my late father’s T-shirt drawer.

Beats me how I ever discovered this, but that simple drawer slid from its simple chest was a source of fascination for me as a kid, so every now and then I’d sneak a look inside. What did it hold? T-shirts, mostly, all laundered and neatly folded by my Mom. My Dad wore them five, six and sometime seven days a week at work under his crisp white dress shirts, which he’d throw out whenever they became splattered with chemicals. This happened to them often in his ascendance from a young chemist at our hometown’s General Motors plant to his eventual post as its superintendent of process engineering.

But if a few stains seeped through to the T-shirts worn underneath, he’d keep those, since nobody would see them anyway. Hence, the packed drawer.

There was far better stuff than T-shirts in there, though.

Sometimes there’d be a paperback book. Nothing racy, but maybe a true-crime story with language that wouldn’t seem right for a church’s chairman of the Board of Deacons to be reading if the pastor dropped by unannounced.  A staunch teetotaler back then, as far as I know, Dad would occasionally stash tiny airline liquor bottles in there, too, apparently snagged from business flights to Detroit. Maybe he gave them to his drinking buddies. But what truly fascinated me were the little airline four-packs of Winston cigarettes he’d also sock away in that underwear drawer, no pun intended.

While I didn’t care too much about the books or the booze, as a youngster whose wicked nature spurred a powerful urge to sin, I believed smoking cigarettes was the coolest thing a boy could do with his life. On rare occasion I’d liberate one of those four-packs and grab some matches. Then I’d head outside for a quick drag or two, looking as casually cool as a guilty pre-teen smoker could look while hiding from his parents inside the garage.

Thirty years later, trying like hell to break a three-pack-a-day habit, I’d come to regret that.

But to me, the truly remarkable thing Dad kept in that drawer was the small, dark blue, slightly battered box in which rested his Purple Heart. From first glance, I knew it was a special thing. It was a beautiful medal, though even back then it seemed a bit timeworn, with a scratch here and a nick or two there. And if you lifted the medal’s cardboard backing from the box, underneath was a rust-stained wad of gauze and an ugly, jagged piece of metal.

The metal was the shrapnel surgeons dug from his shoulder one day back in 1945 during the Battle for Okinawa. That morning, a Japanese kamikaze – specifically one of the twin-engine Mitsubishi bombers Americans nicknamed the “Betty” – had crashed into the S.S. Brown Victory, the merchant ship to which he was assigned as a Navy gun captain. That rust-like stain on the gauze was a smear of Dad’s blood, spilled from the craterous wound the shrapnel gouged in the flesh of his right shoulder.

Close as it came to his axillary artery, he could easily have died. Two other young men on his gun crew were killed in the attack, one cut in half, the other’s back literally blown away.  Another gunner firing a 20 mm cannon, a kid whose last name also happened to be Carlson, died too, as the Betty tore through the cargo ship’s loading booms and exploded.

If you’ve read this column for long, you might remember I’ve told their story before. The point is, we all miss and grieve other friends and relatives we have lost over time.  But come Memorial Day it is those three sailors, along with every other young man and woman in uniform who has sacrificed his or her life in the service of our country, who we specifically thank and honor.

Sad though it is, in a world that now seems particularly lost and troubled, the fact we still have heroes making that ultimate sacrifice gives one pause for thought, hope and gratitude.

That’s why I feel a little tug of emotion every time I see an Indiana license plate that marks the driver, be they young or old, as a Purple Heart recipient. They look so normal behind the wheel, but I wonder about their extraordinary story, where they served, how they were wounded? And just as in my Dad’s case, I wonder how many other American chests-of-drawers shelter blue boxes containing Purple Hearts that attest to their owners’ courage and sacrifice.

By the way, after my Dad’s death at age 93, my wife Nancy and my sister Patty cleaned out his house, preparing it for sale. Nancy brought me home a fine blue box containing a pristine Purple Heart, one he had probably ordered late in life through the Disabled American Veterans as a display piece. In receiving it, I had to admit being disappointed, but figured my sister probably wanted the original, which I could understand.

But a week or two ago Patty texted me. Having been temporarily misplaced during the move, Dad’s original medal had just turned up.

Did I want that one? The old nicked one boxed with the piece of shrapnel and the bloody gauze? The one that gives testament to the day when, like so many other young Americans have before and since, my 19-year-old Dad and his buddies faced down death for the sake of those who would follow them?