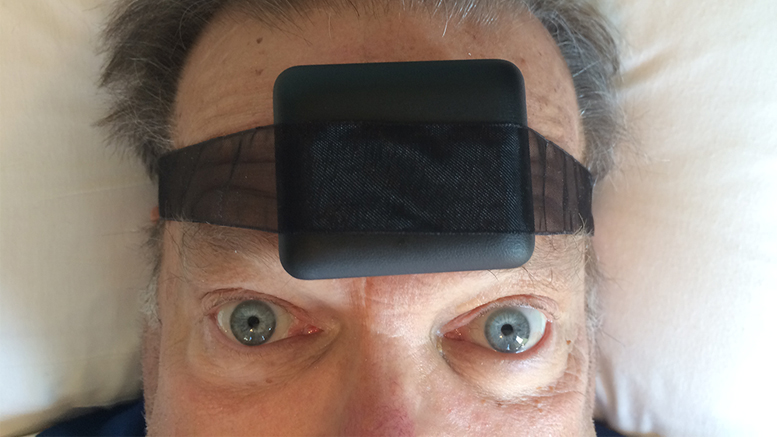 Does voltage pose a threat to guys’ sketchy behavior? Photo by: Nancy Carlson

Not long ago I saw a picture of a person from whose forehead a little black box protruded.

This person was asleep.

Turns out the box was an electronic thingamajig that sends out a shock every time the person snores. This worked something like a Death Row executioner throwing the switch on Old Sparky. Well, except that the black box would shock the wearer into momentary consciousness. Old Sparky, on the other hand, would have the exact opposite effect.

The object of both, however, was to discourage certain offensive behavior.

The little black box reinforced the fact that, much like murder, snoring is evil, and that only vile, thoughtless, heartless creeps who put their own interests before other people’s would have the gall to inflict this on anyone night after night.

Naturally, the person wearing this forehead box was (BIG SURPRISE, FELLAS!!!) a guy.

Yes, once again this advertisement raised the ugly specter of sexism in the American marketplace by making a male the offending party. It was like the ad totally failed to acknowledge the possibility it was a woman whose overactive honker made sleeping with her like trying to catch forty winks beside a foghorn.

She never snores. Full disclosure: In our family, I’m the person with whom sharing a bed is like trying to sleep inside Turn One of the opening laps of the Brickyard 400.

So I guess, realistically, I can see where Nancy would have a legitimate complaint. And I’m fine with that. People married to overactive snorers gotta sleep, too. What truly concerns me, though, is where the technology behind devices like the Snore Shocker will end up? Even more pointedly, what harmless human foibles, especially those associated primarily with the male gender, will such cruel technology be unleashed upon?

For example, anyone who has ever watched the bean scene in Mel Brooks’ classic cowboy comedy “Blazing Saddles” knows about certain uncouth noises that roguish male illiterates – meaning the vast majority of us – are prone to making. This is especially true when gathered with their buddies around a campfire at night. So in an effort to thwart this, is somebody going to make a variation of the Snore Shocker that attaches to their pajama pants? And what, exactly, would be the long term psychological damage of being repeatedly shocked back there?

I pray never to find out.

Even worse, will some inventor who is a traitor to his brothers come up with a forehead box that works as a “little white lie detector”?

Let’s get one thing straight right now.  I firmly believe honesty mustbe the basis of any successful relationship! If one partner can’t trust the other partner to be truthful in all things, they are never going to develop the self-confidence required to navigate the matrimonial slings and arrows which test us daily.

But, hey, let’s not go overboard on this …

What if somebody comes up with a variation on the Snore Shocker that measures the dampness on a guy’s forehead while under intense questioning by a woman? And let’s say while wearing this, some poor guy is trying to explain to his wife how, having been dispatched to buy diapers and baby formula in advance of a bad storm’s arrival, he mistakenly brings home beer and a bucket of chicken.

So, mindful of the need for complete honesty, he lovingly takes her hands in his. Then he tearfully explains how a gang of outlaw baby-sitters accosted him on his way home from the grocery store, making off with the precious diapers and baby formula while sticking him with their unwanted beer and chicken bucket.

“And that’s precisely what happened, darling,” he confesses, letting go her hand to wolf down a drumstick.

“God’s honest truth, little dumpling,” he answers while going to work on a breast, suddenly breathing easier as his wife actually appears to be buying this bull.

But just when that first beautifully greasy hint of chicken breading touches his lips, he goes “AAAAAAAAAEEEEHHHKKK!!!” with a hundred volts rocketing through his brain’s frontal lobes and out his newly smoking nose holes.

Now, doesn’t that seem pretty harsh treatment for what many guys would consider just an innocent little “fibby-wibby”?

Yeah, Nancy didn’t think so either.

But it could happen to hapless guys wearing a Snore Shocker-type fib detector, which I’m pretty sure female scientists are working to develop as we speak. What’s more, these previous examples could be just the start of other cruel and painful uses for correcting common guy-type behavior with modified Snore Shockers.

What if they come up with monitors called Socks Shockers that zap a poor guy’s feet just because he doesn’t necessarily change his socks as often as his wife wants? And I don’t even want to think about such shockers mounted on cookie jars or whiskey bottles.

And what’s next? A billfold shocker where his wife keeps the beer and chi … um, I mean the diapers and baby formula money?  Enough of this could shock all the bad behavior right out of a poor guy.

Which, I’m sure, is exactly what the ladies have in mind.