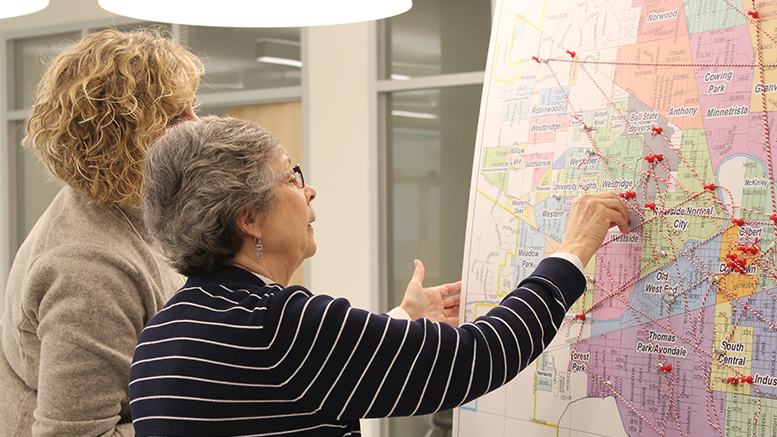 Attendees view a map of Muncie neighborhoods during the IDEA conference. The attendees pinpointed where they live and where they love with a string connecting the two. Photo provided.

Muncie, IN—On March 7th, over 150 community members, political leaders, and facilitators gathered for the 5th Annual IDEA Conference. Hosted at the Ivy Tech Fisher Building, Ball State University’s Office of Community Engagement and Building Better Neighborhoods, Muncie Action Plan and Shafer Leadership Academy brought speakers in to discuss topics relevant to our city’s neighborhoods, including MCS: The Future is Bright, Making Democracy Work, and a demonstration of Web of Support: How Everybody Succeeds.

Participants were asked to pinpoint where they lived and where they loved with a string connecting the two. This exercise helped connect participants with their neighborhoods and was a brilliant display of all the Muncie places people love.

Participants chose breakout sessions based on personal interest. When asked why she attended, presenter Jenny Smithson, Director of Special Education, MCS, stated, “We need to get the positive word out about Muncie Community Schools and as a member of the district administration team, I want to be more accessible.” She was one of five presenters in the breakout session MCS: The Future is Bright. 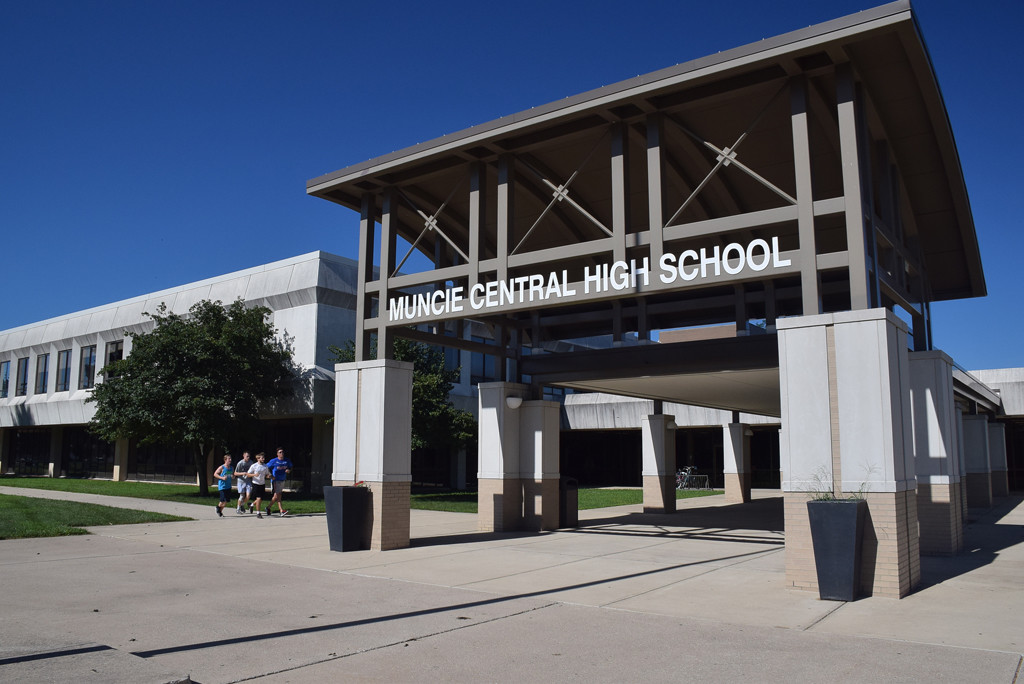 The lunch keynote included an introduction to City of Muncie department heads and a question and answer session. Unanswered questions were collected and sent to the department heads after the conclusion of the conference. These responses will be shared on the muncieneighborhoods.org website.

Trash Awards were given to the neighborhoods that collected the most trash during the Muncie Sanitary District’s spring and fall cleanups. These awards were presented to the Old West End and South Central neighborhoods. Together, Muncie’s neighborhoods collected nearly two hundred tons of trash in 2019.

Riverside-Normal City was presented with the Neighborhood Project of the Year award for their inaugural $2 Tour of the Village event that occured last August and is scheduled again for August 29, 2020. This event helped jumpstart the formation of the Village Alliance, a group of stakeholders working to improve the Village. Country Village – Creekside Association’s Secretary Stan Geidel won the award for Neighborhood Leader of the Year. Stan was recognized for “always jumping in with two feet” to improve his community, as well as his commitment to making his neighborhood welcoming to all. In a fun twist of events, his wife Linda, won the Night on the Downtown raffle. The Geidels will enjoy a dinner at Ron Lahody’s Trust Your Butcher Steakhouse, a Muncie Civic Theater production of their choice, and a stay at Courtyard by Marriott Downtown.

Officer Mike Mueller was recognized for his commitment to improving the safety of Muncie’s neighborhoods with the Protect and Serve Award. Officer Mueller was integral to the establishment of community watch programs across the city and for connecting residents to the city’s police department. 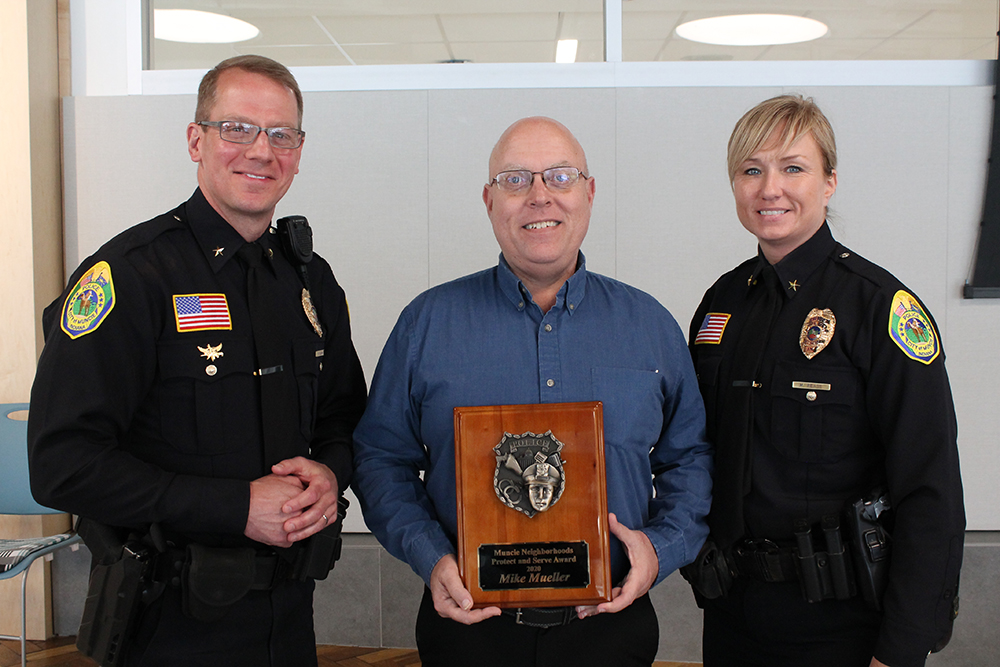 The IDEA Conference ended with Keynote Speaker, Mayor Dan Ridenour for his first State of the City Address.  Mayor Ridenour’s financially focused State of the City discussed Muncie’s biggest assets such as the Muncie Mall and the city’s parks. He pointed out visual issues such as the Red Carpet Inn and the audience was encouraged to hear it would soon be torn down.

The Red Carpet Inn & Suites on South Madison will be torn down. Photo by: Mike Rhodes

To close the State of the City and IDEA Conference, Mayor Ridenour ended on a positive note, “When we bring success to Muncie, that helps Delaware County. When Muncie and Delaware County have success, that helps all of East Central Indiana. Let’s all take responsibility to lead—in our homes, our churches, our schools, our employers and our businesses. The City of Muncie will do what is right for everybody. That will help us prosper going forward. It won’t be easy, but brighter days are ahead in Muncie!” 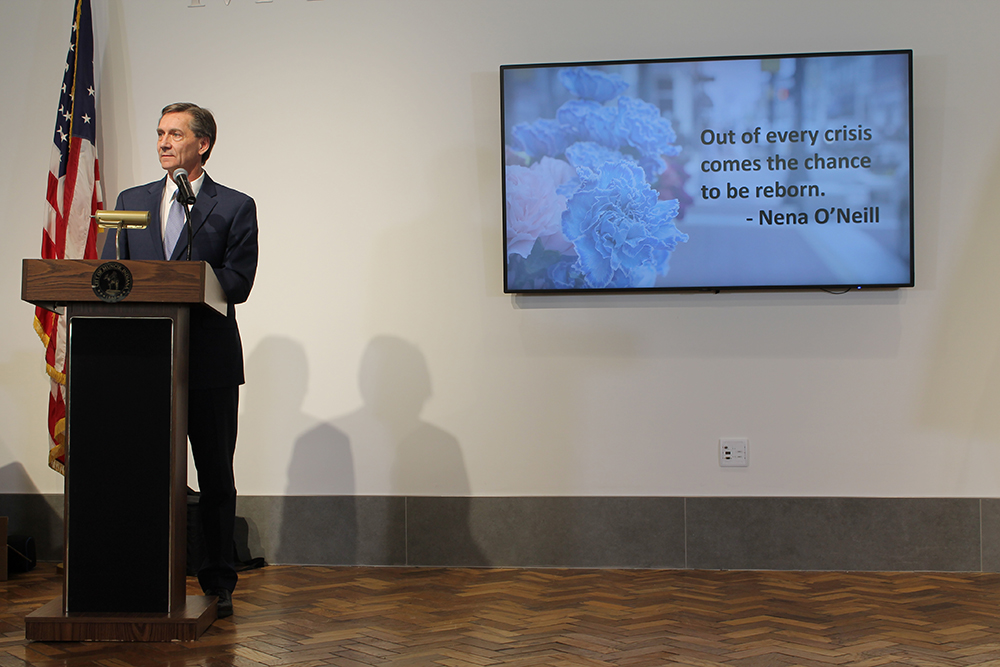 If you are interested in listening to the State of the City or reviewing the slides presented, please refer back to the article: Muncie Mayor Dan Ridenour Gives His First State Of The City Address; ‘Better and Brighter Days Are Ahead’ below.

Additional information about the annual IDEA Conference can be found at muncieneighborhoods.org.

Muncie Mayor Dan Ridenour Gives His First State Of The City Address; ‘Better and Brighter Days Are Ahead’