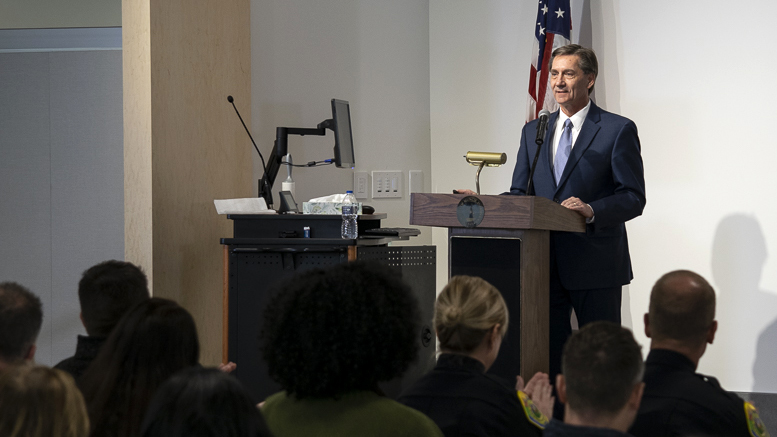 Muncie, IN—”Do not fret. Better and brighter days are ahead for Muncie.”

That was a recurring theme during Muncie Mayor Dan Ridenour’s first State of the City address held on Saturday, March 7th in the Community Room of the Ivy Tech Fisher building in downtown Muncie.

The Community Room was almost at capacity as Mayor Ridenour gave a 2 hour presentation of his administration’s first 67 days in office.

A large crowd was in attendance for the State of the City address. Photo by: Mike Rhodes

Highlights from the State of the City are below.

Mayor Ridenour began his presentation on the topic of city finances.

“The biggest challenge we faced when we took office was city finances,” Ridenour said.  “The city literally has hundreds of financial accounts. On my first day in office I ran a report to see where we were. 18 of those hundreds of accounts were negative in the amount of -$3,310,929.” After looking into those accounts the Ridenour administration found no funds were missing, but did find that some operational procedures had not been followed and some grant money reimbursements had not been sent to the city. Through the efforts of the mayor, Troy Conway, city controller and department heads, the deficit has been reduced to $2.5 million.

“The Muncie Mall is not going away. It’s too important to Muncie.” — Mayor Ridenour. Photo by: Mike Rhodes

Ridenour said he has met with the local mall management multiple times. He found that one of the problems with the mall was a lack of continuous marketing for the mall. He said marketing personnel for the mall come to work one day per week. Leasing agents also come in…one day per week. “If the Muncie Mall is not getting back with people interested in the mall space for 6 or 7 days, the deal may be done,” he said.

Ridenour said he spoke with the management of 36 stores in the mall and found that many of the retailers were doing very, very well in the mall. He only found 4 who were not.

As a 30 year banker prior to becoming mayor, Ridenour feels the best thing that could happen to the mall is for the mall owner, Washington Prime, to return it to the bank. The bank then will do research on the mall tenants just like the mayor did and if they find sales are good for tenants also, they will keep the mall open by having tenants pay rent to the bank, and then find another source to purchase the mall. “The Muncie Mall is not going away,” Ridenour said. “It’s too important to Muncie.”

Ridenour said through  grants and department initiatives, the following streets would be paved:

Ridenour introduced and played a video of a new city web portal for reporting potholes and other street issues. City Engineer Brian Stephens-Hotopp reviews and demonstrates how to use the portal in the video which you can view below. Click on this link to go to the NEW Muncie Street Problem Reporting Portal.

Mayor Ridenour said his administration would be putting an emphasis on city park improvements. Some of the initiatives include improving Cooley Park with a splash pad, walking path and better basketball courts. Heekin Park will get a memory spiral walking path. Halteman Park will also receive a splash pad. Other city parks are marked for improvements. Tuhey park already has a splash pad, but the mayor indicated that sometime this season, the splash pad will stay OPEN in the evenings when the pool is closed. There will be no charge to use the Tuhey splash pad during the evenings.

Ridenour said the city had applied for a grant for Dave’s Alley, a well known landmark downtown to include lighting, archways, greenery, and more. Additional improvements will be ADA compliant.  An additional grant has been applied for to update the Canan Commons area downtown. A groundbreaking ceremony for the apartments will be in the next few weeks.

The White River project is underway and will consist of 55 luxury apartments. David Smith of the Muncie Redevelopment Commission and his team is currently continuing to work on the project. Ridenour said negotiations were underway for a restaurant to be included on the property.

The eyesore called the Red Carpet Inn on South Madison has been sitting empty for years and has been a source of numerous complaints by local residents. During the State of the City address, Ridenour said the building WILL be torn down soon, which caused the audience in attendance to erupt into applause.

The Red Carpet Inn & Suites on South Madison will be torn down. Photo by: Mike Rhodes

In closing Ridenour said, “When we bring success to Muncie, that helps Delaware County. When Muncie and Delaware County have success, that helps all of East Central Indiana. Let’s all take responsibility to lead—in our homes, our churches, our schools, our employers and our businesses. The City of Muncie will do what is right for everybody. That will help us prosper going forward. It won’t be easy, but brighter days are ahead in Muncie!”

MuncieJournal.com asked a few members of the audience what they thought of the State of the City address. Their responses are below.

Scott Trout, DDS–“I thought the presentation was tremendous. It was so refreshing to have someone so open and honest with integrity who is going to do things the right way. Getting the finances under control is important. I think we’ve kind of been looked upon by the rest of the state as “less than.” You’ve got to be financially sound. Excellent presentation.”

Mitch Isaacs–“I’m impressed. I’m inspired. I’m informed. I’m impressed with what he has been able to do in 67 days. I’m inspired by his message of hope and brighter days ahead.  I’m informed about where we are and where he wants us  to be. I don’t know what more I could ask for out of a State of the City address.”

Cameron Grubbs–“I thought it was very comprehensive. Dan gave a very good presentation on the city. I think he makes some key points about the city being very key to the county. There definitely has to be some cooperative work between the city and the county because the city brings so much to the county.”

To learn more and listen to the entire State of the City address as recorded by WLBC, click the play button below.

Click on the image below to open and view a PDF of all the slides used in the State of the City address. 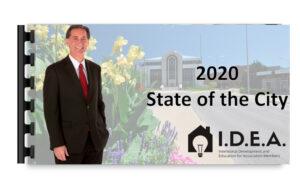