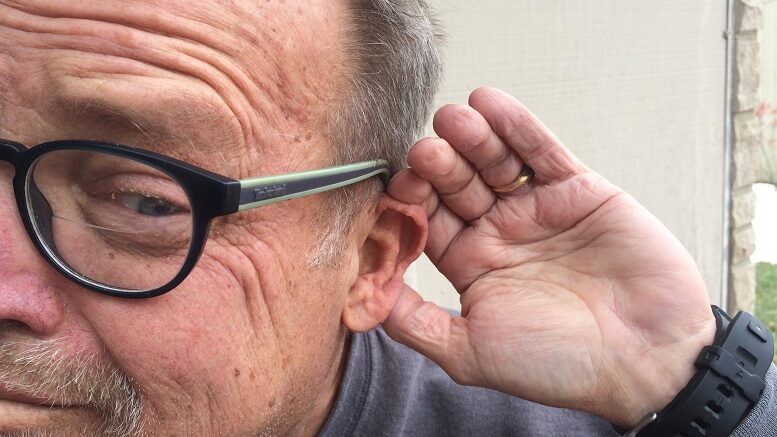 A wife’s plan for a birthday gift is greeted with, “Say what?” Photo by: Nancy Carlson

I already know what Nancy is buying me later this year for my seventieth birthday.

It’s not that I want hearing aids. Nor do I need hearing aids. Do we have occasional problems communicating verbally? Sure we do. And does she keep blaming this on what she considers my woeful hearing? Sure she does. But as I keep reminding her, I have trouble hearing her because the older she gets, the less distinctly she pronounces words that once sprang from her lips with the clarity of a person who worked in radio, which she did.

Like, she’ll be talking and I’ll get a quizzical look on my face and politely inquire, “Honey, are you mumbling your words again, or are you talking through a mouthful of oatmeal?”

Then she’ll get all ticked off at me, of all people!

Also, the older she gets, the more she speaks in a rather odd, confusing fashion. Instead of discussing a “film comedy,” for example, from way over in the kitchen she will suddenly blurt out, “What do you want in a hoot movie?”

So I’ll contemplatively answer, “Oh, like anyone else, plenty of humorous scenes to hoot over, I suppose! Plus an entertaining plot, well-paced character development, a satisfying ending. Those sorts of things.”

Then she’ll roll her eyes like I’m some kind of moron and holler, “I said, ‘What do you want in your FRUIT SMOOTHIE?’”

To which I will reply, “Why didn’t you just ask me that in the first place?”

Anyway, I can see trouble brewing, partly because I witnessed something of my father’s hassles with his hearing aids in his own golden years. His hearing was atrocious, but not for the reason Nancy mistakenly claims the same about my hearing. As a kid in my teens, I foolishly began listening to way too much  rock ‘n’ roll wearing headphones with the volume cranked high. At that same age, my Dad was a Navy gunner, firing desperately at kamikazes attacking his ship while anchored off deadly places like Okinawa.

I always figured that gave him the moral high ground whenever I grew frustrated with his level of deafness, but once I got pretty bitchy about it. He quietly reminded me it wasn’t his fault, that he’d damaged his hearing in the defense of our country.

Let’s just say that shut my big mouth in a hurry.

Still, the reasons for needing hearing aids aside, Dad would always forget to put his in, or remember to put them in but not turn their volume up, or he’d use run-down batteries. Amidst my Mom’s cacophonous cries of, “Are you wearing your hearing aids, Gordon?” sometimes he’d just stare, probably tickled to have tuned her out, plus tuned out the rest of us.

It wasn’t too bad for me, though. The brunt of his daily hearing-aid issues fell to my sister, Patty, to resolve. Some nights, she undoubtedly fell into a troubled sleep, beset by nightmares about Dad’s demonic hearing aids storming her own eardrums.

And another thing. Hearing aids are expensive. Maybe Dad’s weren’t, because his came from the Veterans Administration.

But as I understand it, hearing-aid sellers charge those of us who lost our hearing in more mundane and selfish ways literally thousands of bucks to buy a decent set.

What makes this particularly painful is that, off the top of my head, I can think of a whole bunch of  things I don’t want, but would still rather spend my money on than a pair of hearing aids, up to and including piccolo lessons.

But making me even less excited about getting hearing aids for my seventieth birthday is this: I’m not sure I want to hear the sounds that are likely to fill my ears once I hit the big 7-0. For one thing, I assume my internal plumbing will keep getting louder and louder as it ages, making gross, groaning, squishy noises normally associated with people disappearing in peat bogs and quicksand pits. Then you’ve got the sound of bones clacking. Knees creaking. Spinal discs cracking like Jiffy Pop on a stove top every time you bend over to snap on your sock garters. In other words, the sound of your aged body falling apart.

Do I want to hear that?

And there’s lots of other stuff I don’t want to hear.

The latest in pop music? Sorry, but as someone who believes American musical culture began going downhill the day the Blues Magoos broke up back in 1966, I’ll pass. And then there’s Nancy and her outlandish claims about my hearing loss.

I don’t want to hear those anymore, either.

Of course, once those hearing aids are stuck in my ears, presumably she’ll have no more complaints, because I will be a man totally devoid of faults. Well, except for those mornings when I get mixed up and spray my hair with Right Guard and my armpits with Aqua Net.

I’m pretty sure there are no aids to correct that kind of thing.