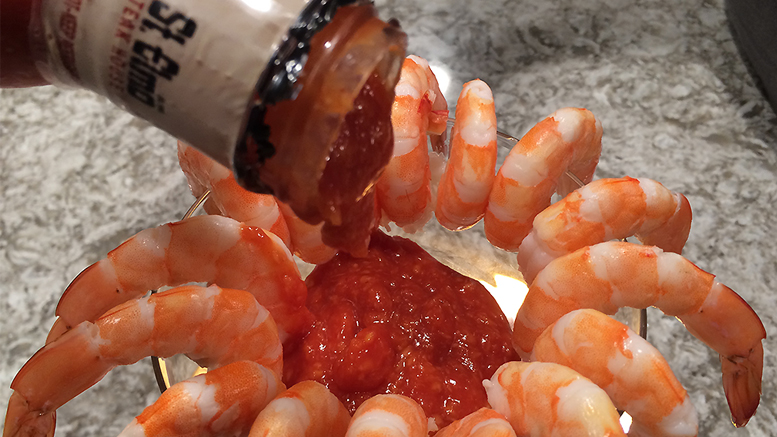 Ingest this sauce, and you’ll breathe flames like a dragon. Photo by: Nancy Carlson

Even in these divisive times, if there is one thing I think most Americans can agree upon it’s this: There’s no such thing as too much horseradish.

This basic premise was reinforced for me the other day when, prior to downing the delicious glob of deli baked beans I had spooned from a two-pound plastic container onto my dinner plate, I forked on a healthy dollop of fresh horseradish.

Then I mixed them together.

One taste and I was like, “Yeah, baby, that’s what I’m talking about!”

Realistically, I suppose there are folks cursed with unadventurous palates who don’t love the taste and smell of horseradish to the extent others of us do. For me, unscrewing the horseradish jar’s cap to take a big, fragrant whiff is like buying a ride on a scary roller coaster at Cedar Point for my olfactory receptors.

It never fails to thrill.

Of course, describing horseradish by its most basic definition, that being a native-Eastern European perennial root vegetable, doesn’t do it justice. But in ancient Greek mythology, no less impressive a dude than Apollo comes to believe it’s worth its weight in gold. Considerably more recently, it was also a garden staple for outstanding American guys like George Washington and Thomas Jefferson. As such, horseradish is seen by many modern-day food historians as the key condiment whose strength of character sparked the Founding Fathers’ decision to break from Great Britain.

That’s because I just made it up. But who knows? Maybe it did.

The thing is, in describing horseradish, words inevitably fail one.

What you need to do is shut up and eat some.

Remember The Spot on Walnut Street across from the Delaware County Building? A newspaper buddy of mine practically lived on its sausage sandwiches, slathered with mustard and thick coatings of horseradish. Sitting near him while he ate one was enough to tempt even a fellow horseradish enthusiast to call for a haz-mat team.

But did these super-spiced sausage sandwiches hurt him in the least? Well, maybe. He died way too  young. But when he was eating them, he seemed full of vim and vigor.

Now, with a jar of horseradish in your fridge, obviously you can spice up your food to whatever degree you wish. Yet there is a commercial product hereabouts that seems to go far beyond any conceivable level of horseradish infusion than most cooks would dare try.

Have you ever eaten a shrimp cocktail in Indy at St. Elmo Steak House? Actually, you don’t have to go there anymore to try its legendary shrimp-cocktail sauce. You can find bottles of the stuff on Muncie store shelves.

Parachuting off bridges and SCUBA diving through underwater caves may be more exciting and death-defying than eating this cocktail sauce, but not by much.

Sure, it looks innocuous enough when you pour some on a plate and run a shrimp thickly through it. Right up until you pop that sucker into your mouth and bite down you may be thinking, “Ha! I got this!”

Just seconds later, though, you will realize that, at heart, you are just a little wussy boy. Or little wussy girl. The heat balloons inside your head like a miniature mushroom cloud, driving everything – other scents, other tastes, cherished memories of your spouse and kids – from your brain and shooting out the escape holes in your nose.

Speaking of spouses and kids: Guys, if you don’t have a family yet but hope to get one, don’t ever take a woman out for dinner at St. Elmo’s without first buying a bottle of its shrimp sauce and acclimating yourself to it. No woman is going to want to marry some wimp who’s sitting across the table from her sobbing uncontrollably into his napkin, even if it is the sauce’s fault.

See, the most dangerous thing about this cocktail sauce is, it tastes so good. This has a disconcerting effect on the eater, I have found. Long after my nose quits gushing and my adenoids stop panting like exhausted marathon runners, I forget just how life-altering this shrimp sauce truly is. I even forget that when you Google it, there’s a note marked “legal disclaimer,” though I have yet to discover exactly what this disclaimer disclaims. For all I know it’s, “May cause severe trauma in little wussy boys. Or little wussy girls.”

At any rate, for horseradish lovers, its great taste guarantees that the next time you encounter it, you’re going to load up on lots more sauce, then go through that fresh hell all over again.

But that’s all right. For most of us, life in this country is too easy. We aren’t tried. We aren’t tested. So in its own way, trial by horseradish may be a good thing for more of us soft, paunchy Americans to go through.

As noted before, there’s no such thing as too much horseradish.

Well, unless you’re referring to St. Elmo’s shrimp cocktail sauce. Then, yeah, I guess there’s almost such a thing as too much horseradish.