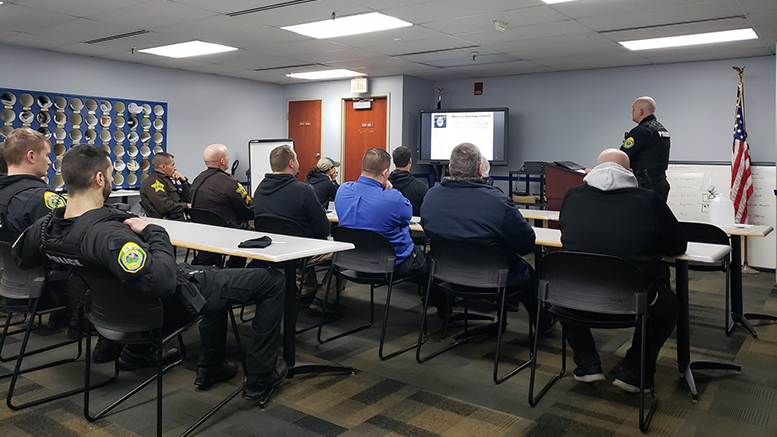 Muncie, IN—Imagine this scenario for a moment…

YOU are a police officer dispatched to a home where a woman alleges a man is trying to break into the back of her home.

Upon arrival at the home, YOU make your way to the backyard.

A woman in her late thirties, dressed in only a beach towel, approaches YOU and says the man is around the side of the house, just past a large outdoor hot tub.

YOU carefully approach the side of the house, and see a man trying to enter a backdoor.

As YOU command him to STOP, the woman lurches forward and quickly grabs a firearm hidden beside the hot tub, turns around, and points it directly at YOU.

What would YOU do at that very moment?

While the above scenario is one that played out during a recent MPD training session, similar situations play out in real life, too. A seemingly innocuous call can turn into a life-threatening engagement in a split second. And MPD officers are being trained on how to respond appropriately to those kinds of situations.

According to new Muncie Police Chief Nathan Sloan, there’s been a lack of ongoing training for police officers in the past. “We found that after interviewing our police officers when we came in as a new administration, there was a real desire to have more training in defensive tactics, firearms, emergency vehicle operations, de-escalation of volatile situations and those kind of things,” said Sloan. “We found a myriad of areas where we felt we could do a better job in training our officers. Our officers told us they wanted more training.”

Chief Sloan says the department has put two training sergeants in place including a full-time training officer who works with officers on a hands-on basis in the field.

However, the Muncie Police Department is now involved with providing additional training for officers such as dealing with the mentally ill, de-escalation and other areas they want to expound on. MPD officers also recently received training on “Sovereign Citizens.” Sovereign Citizen training assists officers who experience a growing number of contacts with citizens, individuals and groups who possess a strong anti-government ideology. Because they believe the government, its representatives, laws and policies are illegitimate, sovereign citizens regularly find themselves in conflict with the law.

Partnering With Other Law Enforcement Departments

Sergeant Mike Refhus is the training officer for MPD. He says right now the department is partnering with the Delaware County Sheriff’s Department and the Ball State Police Department. Each entity has instructors that teach different things, so MPD is trying to work together with those departments in order to better utilize each other’s resources. “For example, right now we are working with the Sheriff’s office utilizing their Firearms Training Simulator (FAS machine)” said Sergeant Refhus. 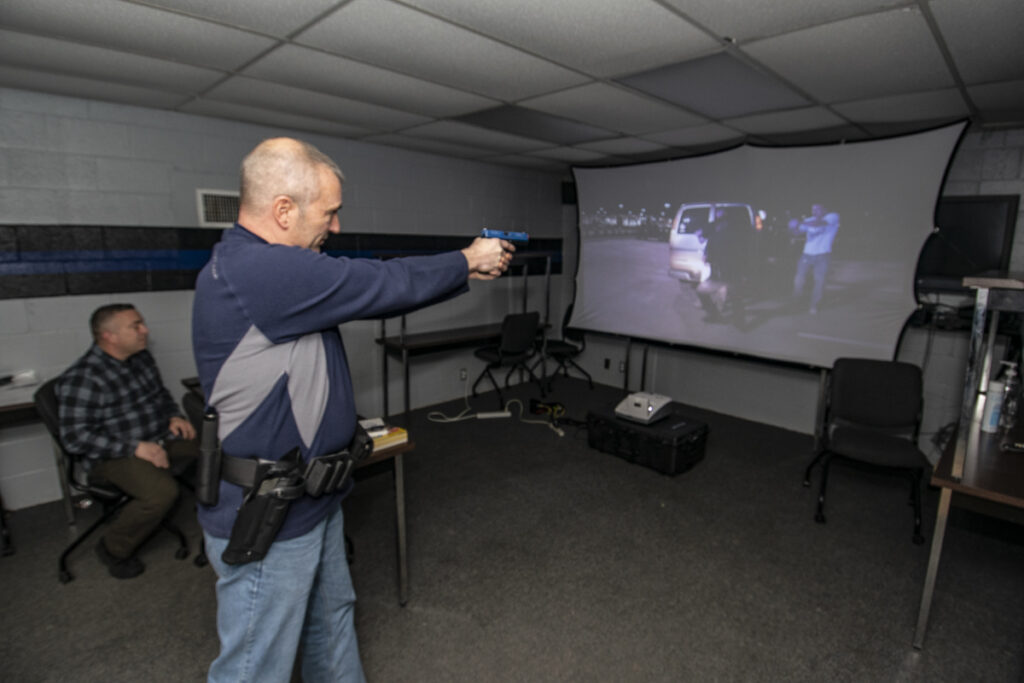 The FAS is a computer based role playing video similulator that aids in officer decision making utilizing video situations officers might experience in real life.

Listen to an audio sample of a FAS training session scenario below.

The Muncie Police Department has also contracted with an Indianapolis firm called “Act Out.” The company provides real actors who “act out” various action scenarios, providing an even greater level of authenticity to officer training. “The officers really get engaged during these types of live scenario training sessions, ” said Chief Sloan.  The Act Out troup will be in Muncie in early April for de-escalation training.

Police chief Sloan says they have received really great feedback about the increased training from fellow officers. Kevin Pierce, an MPD investigator and crime scene tech says, ” I’ve been here about 8 1/2 years and this new training program is one of the best we’ve ever had. This is the kind of training we actually need. It’s very beneficial to us.”