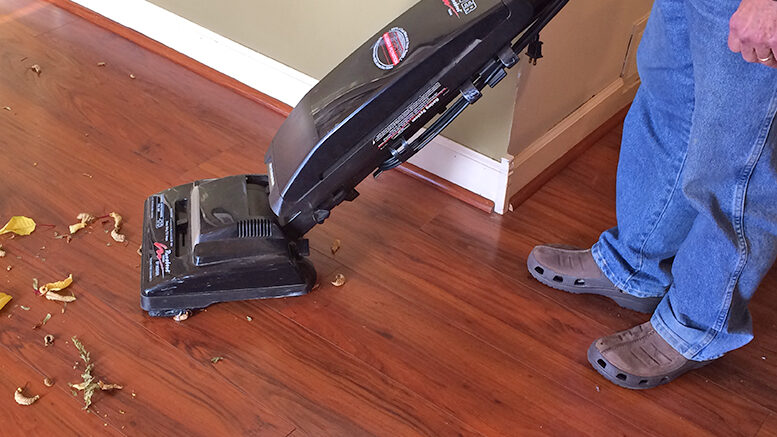 An old-type “Roomba,” steered by what’s called a “handle.” Photo by: Nancy Carlson

When the end of the world arrives, I think it will come riding in on a Roomba.

That’s my dire prediction, after talking with my friends John and Amy Mickle the other day. They have a new Roomba, which is one of those little circular robots that cruises around their house all by itself, cleaning the floors and carpets.

Understandably, they love it.

Of course, Nancy and I have a Roomba, too, except ours is one of those much older models. You know, the kind where it’s screwed to a big stupid handle. You simply muscle this handle in the direction of where you passed out on the carpet eating Cheez Doodles the night before, drooling an orange pool of now-tacky Doodle juice into the fabric.

Then it sucks up the Doodle juice, kind of like one of those old “vacuum cleaners.”

Anyway, what our friends told me about their Roomba amazed me. For one thing, it’ll roll to the edge of a steep stairway. Then just when it’s about to make like a lemming by plunging over the side to its death, it will automatically back away from the edge.

That’s right (cue the ominous-sounding music). Their Roomba comes with an innate sense of
self–preservation.

And another thing about it. If there’s a part of your house that traditionally needs cleaning more than others, it will automatically roll to that very spot and scrub the living daylights out of it. If that’s impressive, which it is, it’s also another reason why I’m leery of owning one.

See, being a retired man of leisure now, I tend to spend days at a time lounging around the house  contemplating my navel. Consequently, at any given moment, it’s very possible the most disgusting mess in our house is me. But say company comes over without warning, waking up the Roomba to its responsibilities. Is it possible the Roomba will storm from its closet, then make a beeline for me, clawing its way up my pajama pants to launch a full-frontal assault on the Doodle crumbs enmeshed in my chest hairs?

Yes, I believe it will.

And will the Roomba care that this public assault on the Doodle crumbs enmeshed in my chest hairs embarrasses the heck out of me?

That’s because, besides self-preservation, the Roomba is also apparently programmed with an overriding sense of ambition to get the job done, regardless of circumstance.

Even more ominously, though, if Roombas come infused with concerns for their self-preservation and overriding senses of ambition, might they also be capable of developing personalities linked to their domestic surroundings?

Given this, I will concede the vast majority of Roombas are upstanding household appliances. Take John and Amy’s. They even call it Savannah, a beautiful name as befits a beautiful family and the beautiful city where their beautiful daughter Abby studies art in college. With a sweet name like Savannah, there’s no reason to suspect their Roomba wants anything more from life than to be a productive member of society, plus someday maybe own a Stanley Steemer franchise.

But what about Roombas owned by crankier, at-risk, significantly flawed families? Might these folks not give their Roombas nastier names, like Mister Balls-to-the-Walls or Tuff Mutha, or maybe even  Cujo? And might not a Roomba called Cujo, named after the rabid St. Bernard that chomps people like Dog Yummies in Stephen King’s horror novel of the same name, be beset with some anger-management  issues?

Of course, things might start off OK. Like the canine Cujo, it would probably begin as a cuddly little Roomba puppy, doing no more harm than metaphorically dropping an occasional dook on the carpet. But as Cujo the Roomba hits its rowdy adolescent years, chances are it would start rebelling just like the rest of us did at that age. Sure, at first that might simply mean snorting derisively at its owner’s suggestions, plus rolling its electronic eyes in frustration when called upon to clean up more dried Doodle juice.

But any Roomba with a bad attitude like that is going to grow up resentfully stoking a well-honed sense of its own entitlement.

Next thing you know, its owner will return from work to find the refrigerator door ajar and think, “Wait a minute! Didn’t I have seven beers in here yesterday?” Meanwhile, off in its dark hallway closet, Cujo the Roomba will be snoring soundly, parked over a spreading pool of pilsner.

And say one of their owners comes out all uppity like, looking to snatch his Roomba back inside the house where it belongs. Then, suddenly, he notices the other Roombas have surrounded him, and are inching menacingly closer.

Yeah, that’d get my attention.

Extrapolate that out to when almost everyone in the civilized world owns a Roomba. Billions of these Roombas will have exaggerated senses of their own importance, plus the will to act on them to make this world a place where appliances no longer kowtow to people.

It gives you pause for thought.

What, you wonder, is coming next?

I hate to even think about it.

Meanwhile, that Roomba in your closet sits biding its time, waiting … watching …