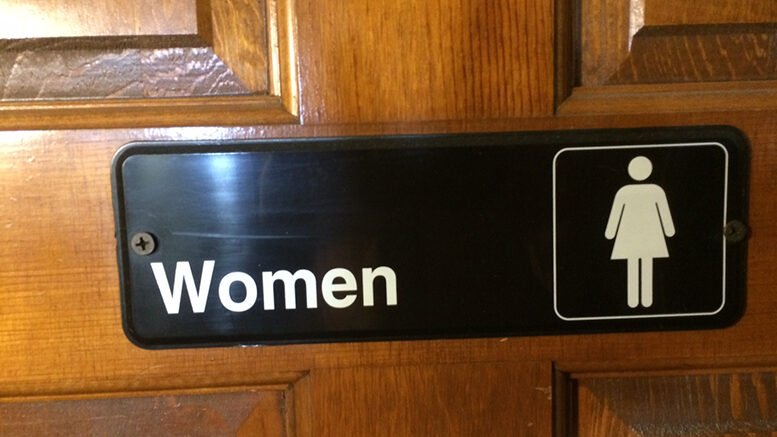 “You know,” I cheerfully announced, just trying to be helpful, “if you gals would quit playing parlor games in there, you’d get in and out a lot quicker.”

In response, one of them laughed bitterly.

The others shot me withering looks that said, “Who’s this pervert?”

Meanwhile, I slapped my head and went, “Doh!” Being a man, I realized I’d just inadvertently flashed back to the guy’s universal belief that women hang out for hours at a time in their restrooms because theirs are so much better than ours.

I know this isn’t true, I guess, but still …

In a guy’s restroom, if you are lucky, you might find a rickety toilet or two, a couple urinals with wads of chewing gum stuck in the plastic traps down near the drains, plus a sink of sorts. But sometimes you don’t even find that.

It was just this sort of disparity that led to the spread of outrageous rumors of female restroom superiority. Word leaked out that comparing our cruddy johns to fancy women’s johns was like comparing outhouses to the pristine water closets that coddle upper-class Indians’ tushes in the Taj Mahal. Why else would women disappear into theirs for so darned long? Once a guy bought into that notion, it didn’t take long for him to accept farfetched speculation about women’s johns that almost defied belief.

Nevertheless, we guys did believe it.

For example, we believed that many ladies’ restrooms employed bartenders.

These female bartenders would greet their lady patrons just inside the restroom door with, “Care for a glass of Chablis, ma’am? A frozen margarita? Or perhaps the lady would prefer a Bloody Mary, served with olives, a giant Slim Jim and a nice chunk of Brie?”

I can’t begin to guess how many times I heard all about ladies’ restroom bartenders.

“They really have them?” we guys would ask skeptically while sitting in taverns talking about ladies’ johns with wiser guys.

“Absolutely,” the wiser guys would assure us.

And then there was the furniture with which women’s johns were equipped, including couches and fully functional recliners! From there, it wasn’t much of a leap for us poor guys to decide these dual-purpose couches and recliners were equipped with space-age plumbing advancements, plus foot rests that put the “rest” back into restrooms.

Meanwhile, we learned the ladies restrooms also had more television sets than a Buffalo Wild Wings, except none of these TVs was tuned into sports. Instead there would be European baking shows playing on some of them.

So while the ladies lounged around comfortably chatting with their gal-pals on their special recliners, waitresses bearing trays of bone china dessert plates would bustle about offering scrumptious free servings of tiramisu.

At news of scrumptious free servings of tiramisu, the wide-eyed guys’ questions would fly.

“And the women don’t even have to pay for the tiramisu?” a second guy would splutter.

“And what the hell is tiramisu?” a third guy would break in.

But most of the televisions would be broadcasting those home-and-garden shows the ladies love, ones featuring fascinating topics guaranteed to capture women’s imaginations. Like there’d be, “An In-Depth Look At The Seventy-Five Newest Shades of White,” or, “How To Rid Your Garden of Bothersome Slugs (Hint: Sign Him Up For a Bowling League).”

Or tiring of TV, the ladies would enjoy complimentary pedicures and manicures, or browse copies of romance novels shelved in the standard women’s restroom library before settling down to read under the tanning lamps. Or they could plop onto the massage table manned by a musclebound person in Spandex named Monsieur Henri, who’d spend half-an-hour kneading the gluteus knots out of their maximuses.

Meanwhile, the most interesting thing in the men’s johns being those gum wads caught in the urinals’ plastic drain traps, the guys would have long since returned to their seats, where they patiently twiddled their thumbs.

Then, at long last, the ladies would decide it was time to rejoin their husbands and boyfriends. But one final thing! On their way out the door, they would be met by the women’s restroom chefs, who would hand them fancily wrapped, gal-type sandwiches – say, free-range turkey on ciabatta bread with extra yummy bean sprouts – to take home for lunch the next day.

“Where’ve you been?” the poor guy would ask, as his lady took her seat. “And where the heck did you get that sandwich?”

Of course, it’s also possible I’m totally wrong about all of this.