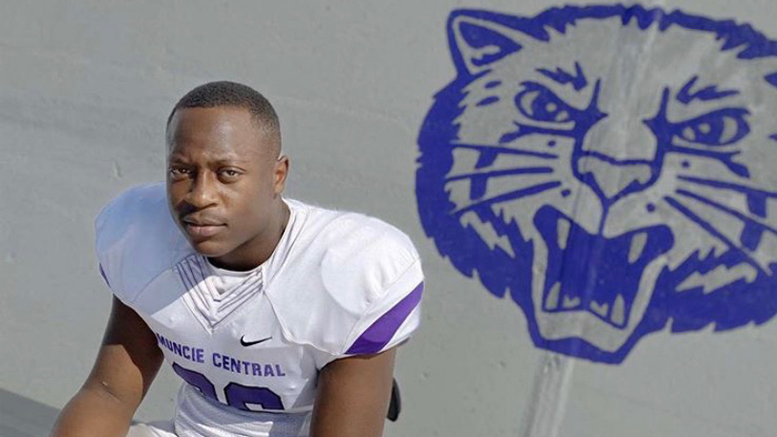 Muncie, IN—Muncie Central High School sophomore running back Shoka Griffin II will play for the elite USA Football Under-16 Select Team at International Bowl XI later this month at the home field of the Dallas Cowboys. He is one of just 52 student athletes nationwide selected and one of two selected from Indiana. Eli Frei of Westfield also was named to the same team.

“This is an outstanding achievement,” said Aaron Ingram, senior manager of football/national teams in Griffin’s announcement letter. “You are about to complete your journey and join the elite group of U.S. National Team alums like Todd Gurley, Dwayne Haskins, and Tyrann Mathieu.”

Under-16 Select Team will play Panama in the International Bowl XI on Tuesday, Jan. 14 in Arlington, Texas at AT&T Stadium, home of the Dallas Cowboys. Student athletes participate in Bowl Week Jan. 10-14.

Griffin, 5 feet 9 inches tall and 200 pounds, is a member of the Class of 2022 at Muncie Central High School and will play with the best student athletes from across the country.

Griffin rushed 1,638 yards, had 18 touch downs, and 100 receiving yards last season for Muncie Central. He was selected first team All-Conference as a sophomore, MAX Player of the Week, MVP of the USA Training Camp and Star Press Player of the Week. He also received the Offensive MVP award from Muncie Central High School. Shoka is coached by Muncie Central High School Coach Darrick Lee, who just completed his first season as head coach. Previously, Lee was an assistant coach at Central.

“He represents not just Muncie Central but the City of Muncie and brings a lot of pride and positivity to our community,” Lee said. “We have great young men and women who strive to be the best version of themselves. Shoka does that every single day.”

“He can compete with anybody,” Lee said. “Any chance he’s gotten to compete at a high level, he has risen to the challenge time after time and has done so humbly and as a responsible, young man.”

Shoka is the son of Shoka Griffin Sr. and WaTasha Barnes Griffin, who is chief executive officer of the YWCA of Central Indiana and a member of the Muncie Community School Board. Shoka’s sister, SaNiya, is in the seventh grade at Northside Middle School.

Viewers can watch the game via livestream at THIS LINK. (If viewing on a phone, you may be directed to download the ESPN app.)