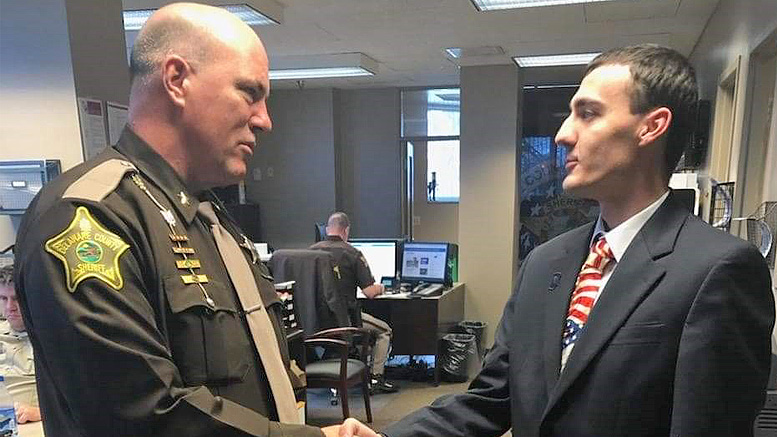 By: A Voice For Kids—

Muncie, IN—Muncie resident and Ball State student Matt Peiffer, a former child in Indiana’s foster system, has received a national award for helping other foster children get the extra support they need. Peiffer’s Muncie-based organization A Voice For Kids is one of 30 winners in T-Mobile’s second annual Changemaker Challenge, a contest that asks young people ages 13 to 23 to submit ideas to improve their communities.

Peiffer’s inspiration for A Voice For Kids is his own experience in the foster system. He lived with his adoptive parents and two biological sisters for 13 years until his parents were charged with abuse. He spent the next two years in eight foster homes before aging out of the system at 18.

“Even with foster parents, kids often feel alone at home,” Peiffer said. “We’re giving a voice to their unique needs by helping those around them to better understand what it means to be a foster child.”

Peiffer says that abuse is another issue that the foster system needs to address, and his message to adults is all about prevention.

“I don’t want any other kids to have to go through what my sisters and I did for all those years,” said Peiffer.

His passion keeps him busy. Peiffer sits on the Indiana Youth Advisory Board and has spoken to more than 200 organizations across the country, primarily police departments, churches, universities and foster care and adoption agencies. He’s also well-known at the Indiana statehouse, advocating for legislation that improves the lives of foster kids. Peiffer has already helped the state pass laws to improve medical coverage and education for foster kids. Today he’s pushing for better data collection on abuse in the foster system.

As one of the 30 winners in T-Mobile’s Changemaker Challenge, Peiffer receives $2,000 in seed funding and a trip to the Changemaker Lab at the wireless company’s headquarters in Bellevue, Wash., in February. At the three-day workshop, winners will develop the skills and community building to reach their organizations’ goals. And it’s a powerful networking opportunity when some of the nation’s brightest young people come together.

“We’re giving these passionate and creative young people who are committed to a better tomorrow the platform and the resources to kickstart their incredible ideas and make a meaningful and lasting change in their communities,” said Brigitta Witt, T-Mobile’s vice president of corporate responsibility and sustainability.

The T-Mobile Foundation worked closely with non-profit partner Ashoka to develop the Changemaker Challenge, which supports young social entrepreneurs as they bring new ideas to address the world’s biggest challenges. Ashoka works around the world with partners like the T-Mobile Foundation to support youth with develop core competencies of empathy, teamwork, collaborative leadership and changemaking skills.

Peiffer has already accomplished a lot on behalf of foster kids in just a few short years, and he’s still focused on his core mission.

“Our future generations of foster kids need a voice, and not just from somebody who thinks they know what’s best for the child,” said Peiffer. “The kids need to be heard too.”