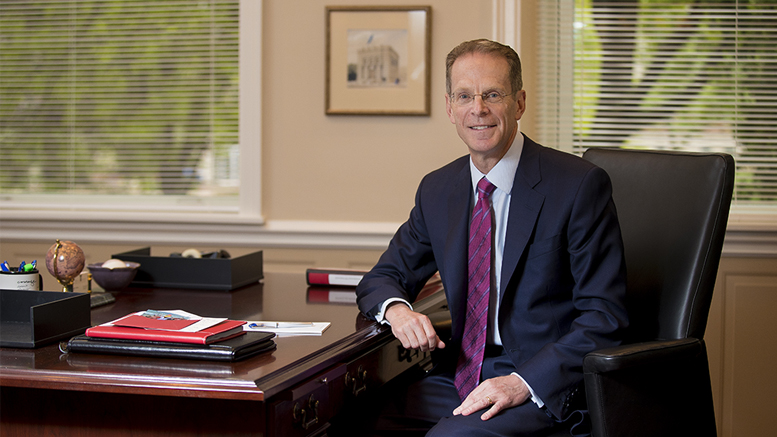 Muncie, IN — The Ball State Board of Trustees took steps today to maintain the positive momentum of the University by unanimously extending the contract of President Geoffrey S. Mearns and electing new officers, including Renae Conley as chair.

“Ball State is stronger than ever,” said Rick Hall, ’89, who served as Board chair from 2014 until today. “In extending President Mearns’ contract, the Board has taken an important step in ensuring that the University will continue its upward trajectory.

“Since his arrival at Ball State, President Mearns has inspired the University with exemplary leadership and vision. He, along with the leadership team that he has assembled, is engaged in the implementation of an ambitious strategic plan, Destination 2040: Our Flight Path. The plan, created through the University’s most inclusive, consultative, and comprehensive strategic planning process, establishes dynamic goals to guide Ball State into its second century.

“Beyond campus, President Mearns has effectively conveyed Ball State’s excellence to alumni and community and political leaders. Last year alone, President Mearns, working with a team of others, championed over $30 million in philanthropic support for Ball State, the largest annual amount raised in over a decade. Two examples are the Scheumann Family Indoor Practice Facility and the record-breaking success of the first One Ball State Day.”

“Through the Muncie Community Schools initiative, Ball State has demonstrated the positive impact that an institution can have by leaning into problems to find solutions and move a community forward,” he said. “As a Board, we are particularly grateful for his active leadership in this challenging and innovative endeavor.”

Trustee Hall pointed out that President Mearns and his wife, Jennifer, established the Mearns/Proud Family Scholarship in 2017 to benefit Muncie Central graduates who are first-generation college students and choose to attend Ball State. As a demonstration of their continued personal commitment to the children of Muncie, President and Mrs. Mearns are now doubling their original commitment to an exceptional gift of generosity totaling $200,000.

“When Jennifer and I first got here, we spoke to the Board about our commitment to the community and received their strong support to improve the partnership between the University and Muncie,” said President Mearns. “Jennifer and I are enthusiastic about continuing to serve Ball State, the community, and the state of Indiana. We are grateful to so many people on- and off-campus who have lent their support as we continue to prove that we are better together.

“It is an honor and privilege to serve as president of Ball State University. In the past two-and-a-half years, we have made measurable and meaningful progress in fulfilling our mission. And I am gratified and enthusiastic about the prospect of continuing this important work with our students, faculty and staff, alumni and friends, and community partners.”

The Board of Trustees also elected new officers to two-year terms with Trustee Conley succeeding Trustee Hall as chair. She has served as vice chair since 2016. Matt Momper will serve as vice chair with Mike McDaniel as secretary and Brian Gallagher as assistant secretary.

The Board of Trustees limits the service of its Chair to four years. At the request of his colleagues, Chair Hall agreed to serve an additional two-year term in 2018 to assist in the transition of President Mearns, who arrived on campus in 2017. Hall will continue to serve as a member of the Board of Trustees.

During his six years as Chair, Trustee Hall has provided stability for the University during some of its most complex times. With his constant leadership, Ball State has achieved record enrollment, attracted its most academically qualified and diverse student body, and imposed the lowest tuition increases in over 40 years.

Trustee Hall said, “Serving my alma mater as a member of its Board of Trustees since 2007 has been an honor. Ball State has had an incredible impact on my life, and seeing up close the impact it has, and will continue to have, on the lives of people of Indiana is truly a privilege.”

Chair Conley thanked Trustee Hall for his leadership and continued service to the Board and the University.

“With Trustee Hall’s leadership, along with the Board working together for the greater good of the University, we can proudly reflect on our past and look to our future with optimism,” she said. “I thank my fellow Board members for the trust they have placed in me to continue the good work Trustee Hall has accomplished. Together, we will maintain our strong enrollment and continue our innovative partnership with the Muncie Community Schools. In the future, we will launch Ball State’s most ambitious capital campaign, which will help us meet the goals of our strategic plan.”

Chair Conley has deep ties with the Muncie community as a graduate of Burris Laboratory School and of Ball State, with a bachelor’s degree in accounting in 1980 and an MBA in 1982.

“One important facet of Ball State’s strategic plan is the commitment to serve our neighbors and strengthen our community,” she said. “As someone who is from Muncie and still has family here, that is personal to me.”

Chair Conley retired as executive vice president of human resources and administration from Entergy Corporation, where she also served as chief diversity officer. She previously served as president and CEO of Entergy Louisiana and Entergy Gulf States Louisiana for 10 years. Chair Conley began her career in 1981 with Public Service Indiana, which is now part of Duke Energy.

In taking her new leadership role, Chair Conley said she will continue to be a passionate advocate for Ball State and Muncie.

“I’m so grateful to be associated with an incredibly talented group of individuals — my fellow Trustees, President Mearns, vice presidents, deans, and the highly dedicated faculty and staff,” she said. “I am optimistic our positive trajectory will continue. We are well positioned as our University enters its second century.”