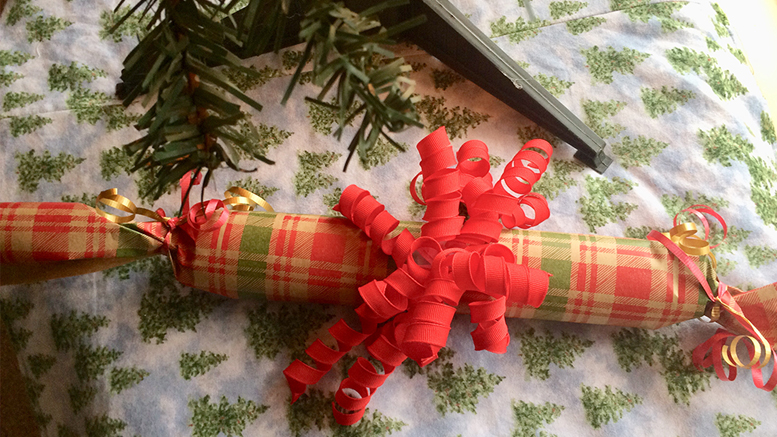 Just guess what’s under all this wrapping paper! Photo by: Nancy Carlson

Every year about this time, I join the ranks of the Christmas-challenged.

Things didn’t used to be that way. Years ago I got as excited about Christmas as any kid did, but you know how it goes. With the passage of time, the realities of the holiday set in. The frenetic pace. The bills. The disappointments. This year, for example, I once again seriously doubt Nancy is going to buy me the $70,000 Corvette I’ve got my heart set on.

Some would say I should be getting used to this. After all, nobody has bought me a new Corvette for sixty-nine Christmases in a row now. Well, sixty-six, if you considered Chevy’s only been making them since 1953.

Still, as the saying goes, hope springs eternal. If I thought I did have more than a Frosty-the-Snowman’s-chance-in-hell of waking up to a new Corvette parked under the tree, would my Christmas attitude be more positive? Sure! If I thought it would help do the trick, I’d even happily humiliate myself in public through the busiest shopping days of the season, sitting adoringly on Santa’s lap out at the mall with my arms wrapped tightly around his big fat neck.

But it’s not gonna happen.

The time when all the holiday cheer started going south for me, I was in my mid-twenties. My personal life was a wreck, I was nearly broke, and everywhere I went I stumbled around unshaven in mismatched shoes mumbling gibberish with a creepy, shell-shocked look on my face. And those were the fun times! Two days before this particular Christmas I was stuck with a load of gift-buying to do. Hating shopping even worse than I hate root canals, my spirit was plunging.

That’s when I spotted the answer to my dilemma neatly stacked in a mall kiosk – a big pile of festively wrapped summer sausages!

In all my years up to that point, I had never considered summer sausages the answer to my Christmas shopping needs. What would giving summer sausages say to my loved ones? “Merry Christmas, Mom! Here’s some meat!” sounded stupid. Could I stoop to that?  And yet I knew that at Christmas the year before, an enterprising co-worker of mine had waited to shop for his Mom at a Village Pantry on the drive home for Christmas dinner, buying her four nice, shiny cans of motor oil.

Admittedly, it had been the good stuff, Quaker State 10w40, if I recall. As far as I know, he wasn’t disowned by his family.

So acceding to convenience, I bought everybody on my Christmas list a summer sausage. This went over pretty well the first few sausages I handed out. Dad liked his. So did my Uncle Herby, my Cousin Tiger and my Grandpa Howdy. But along about the eighth summer sausage I presented, the family members surrounding me began sensing a pattern involving my woeful lack of gift-giving gumption. Kids got sausages. Women got sausages. I’m pretty sure even some relatives with no teeth got sausages. Looking on, you didn’t have to be a genius to figure everybody else was going to get a sausage, too, their distinctive shape being hard to disguise even under wrapping paper.

And hey, I told myself in a pitiful effort at rationalizing my faux pas, I could’ve done far worse! At least the men got to eat them slathered with mustard and horseradish while drinking beer and watching television. The kids could use theirs in summer-sausage sword fights. The women? Obviously, as I explained to them, summer sausages made great pastry rolling pins.

Anyway, my summer-sausage cop-out that year pretty much set the tone for some wonky Christmases to follow. This was even though I did deliver much joy right after the holiday by carrying our tree out to the curb while foolishly wearing gym shorts.

Within three steps, the prickly evergreen needles were nailing my exposed flesh like angry hornets. Up ‘til right then, I hadn’t realized the human heinie – especially the male human heinie – could thrust itself into the torrent of gyrations I was now putting mine through in a last-ditch bid to avoid those needles. Legendary strippers like Gypsy Rose Lee and Blaze Starr had trained their whole professional careers, yet couldn’t shake their cans with the same wild abandon I was suddenly improvising right on the spot!

And sounds? My high-pitched squeals could have been the soundtrack to a Future Farmers of America video about harvesting mountain oysters.

Let’s just say by the time I gratefully ditched the tree at the curb and scooted back inside the house to safety, my mother was laughing her head off. She had never been so entertained in her whole life. And after my summer-sausage stunt, I believe she also secretly figured I had gotten exactly what was coming to me.

All this is not to say my Christmases since then have been drudgery. Even if I am Christmas-challenged, Nancy and I have enjoyed ours together, especially once the kids started arriving. And then there were the couple Christmases when I was recruited by my old workplace to be Santa Claus at the company party. This was because I was so incredibly jolly, and NOT because I had the perfect physique for the job. (And if you believe that, please contact me about buying the Tillotson Avenue bridge, which I’m selling at a major discount.)

But in being Saint Nick, I found even if you know you’re not really Santa Claus, there’s a special feeling that comes over other people at Christmastime that makes them willing to pretend you are really Santa Claus. It was a marvelous experience, one I’m grateful to have had, and one I’d recommend to anyone, even if you have to fatten up on fudge to get the gig.

So this Christmas? I’m sure, it will measure up just fine, too, the lack of my new Corvette notwithstanding. And if I may offer one quick note of personal advice, Christmas is always brighter if you do something to spread some extra love around to those whose lives may find it lacking.

In short, don’t forget the Reason for the Season.