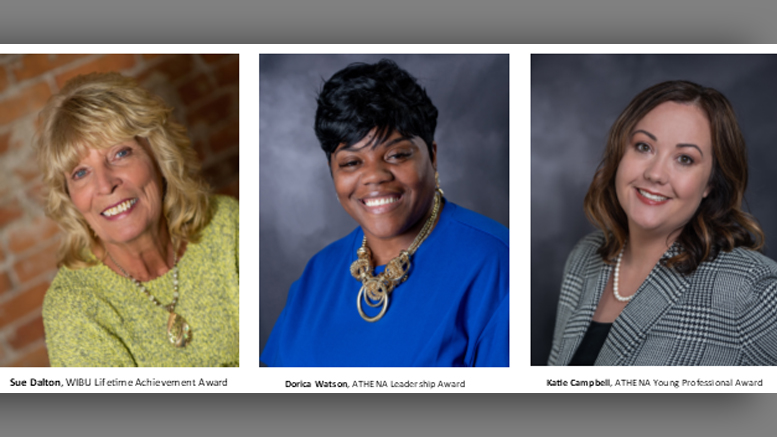 The WIBU Lifetime Achievement Award honors a woman who has dedicated her life to be a leader and role model and is selected by the WIBU Board of Directors. In addition to a framed certificate, WIBU will award a scholarship in Dalton’s name to a full-time, non-traditional female student enrolled in a local college/university. The 2019 scholarship award presented in the name of the 2018 WIBU Lifetime Achievement Award recipient, Ruth Chin, was awarded to Julia Bladen and Jennifer Shipley.

The ATHENA Leadership Awards are internationally-recognized awards which WIBU has been pleased to present for twenty-one years. In order to remain impartial, the nominations were submitted to a judging panel for review. Each judge, residing outside of Muncie, reviewed and evaluated each nomination on its own merits and scored according to a provided ATHENA Recipient Selection Form. From a pool of twenty-two nominees, the ATHENA judges had the unenviable task of choosing the 2019 ATHENA Award Recipients.

The ATHENA Award honors individuals who strive toward the highest levels of professional accomplishment, who excel in their chosen field, have devoted time and energy to their community in a meaningful way, and who open doors for women.

Dorica is the Community Engagement Manager for Second Harvest Food Bank of East Central Indiana. She is a change agent and is responsible for engaging the community in understanding the prevalence of poverty and efforts to embolden individuals to move from surviving to thriving. Dorica believes that relationships of mutual respect and understanding are the key for sustaining our community.

The ATHENA Young Professional Award is a natural extension of the ATHENA Leadership Award.  This award celebrates an emerging leader who demonstrates excellence.  They have already shown, in a short time in their chosen field, that they hold the ideals of the ATHENA and are a role model for young women personally and professionally.

Katie is the Executive Director of Compassus. She is an advocate for patient rights which is clearly visible through the footprint she has made in her career achievements. Her persuasive personality has increased involvement and action in the many organization she is a part of in Muncie. Katie is a mentor and motivator to many.

Award recipients were announced by the previous year’s recipient in each category and in addition to the ATHENA statue, recipients also received a custom-made piece of jewelry by Muncie’s Pazols Jewelers.