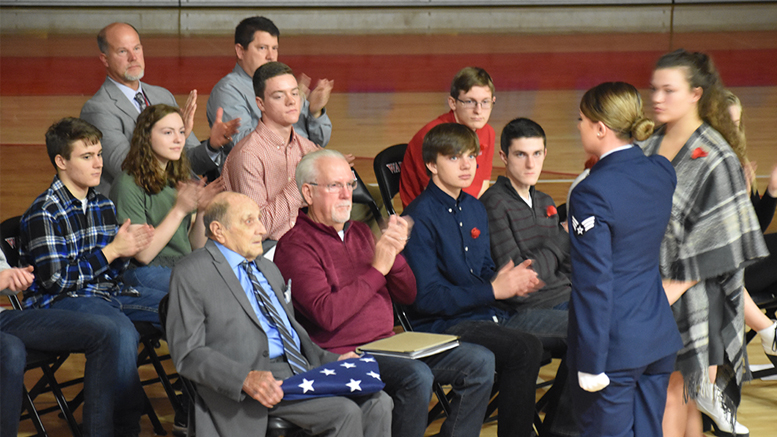 The program is put together each year by Wapahani teacher, Todd Howell, and his Advance Placement U.S. History class.

Howell and his students put together the school program every year to show their respect towards our veterans. Wapahani junior, Syndal Hittson, was the organizer of this year’s Veterans Day convocation. Syndal was voted by her peers to be the main organizer. The AP U.S. History students worked for more than a month preparing the program.

“We have been working very hard on this event. We want this to be the most respectful event it can be,” according to Syndal.

Wapahani invited two area residents as guests of honor, Junior Howell and Michael Rost. Junior Howell is a World War II U.S. Marine veteran who received the Purple Heart for his service. He was a Selma-area resident and graduate of Center High School in Perry Township when he enlisted in the Marines as a teenager. He was a part of a flame thrower unit that fought in the Battle of Peleliu, one of the deadliest Marine battles of World War II. He was injured in the fighting, but he did not receive his Purple Heart until just a few years ago due to a government oversight. His story was told to WHS students during the ceremony Monday by his friend and fellow veteran, Michael Rost. Rost himself is a veteran of the U.S. Air Force.

Also during the convocation, Junior Howell was given a special American flag. It was presented to him by Wapahani alumni, Katie Leach. Leach is a Senior Airman in the U.S. Air Force.

AP U.S. History students also read the history of Veterans Day, the symbolism of the Table for One display, and the Veteran Recognition. An award for a Veteran’s Day art contest was also presented to WHS Sophomore Makenna Bray. The Wapahani choir began the program with the singing of the National Anthem.

Wapahani AP U.S. History students appreciated the appearances of the guest speakers and the effort everyone put in towards honoring our veterans.