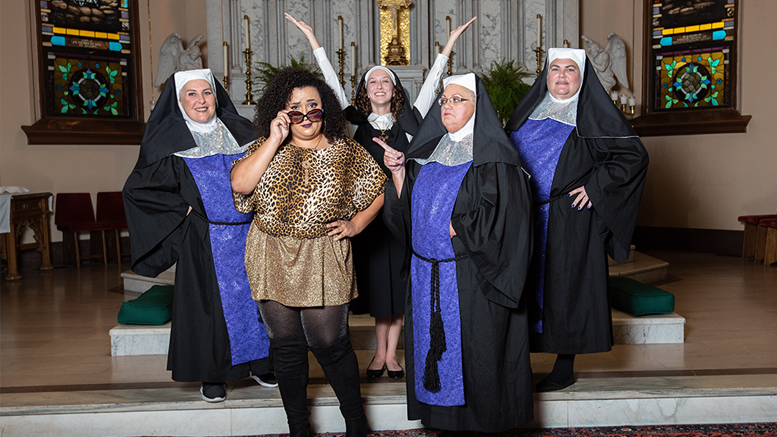 Muncie, IN—These sisters certainly have their act together.

Based on the hit 1992 film starring Whoopi Goldberg, “Sister Act” is a hilarious story of a wannabe disco diva (Deloris Van Cartier) whose life takes a surprising turn when she witnesses a crime and ends up in police protection, hiding out as a nun in a convent.

Dayna Arnett saw a touring production of “Sister Act” in 2015 and said she “knew I had to one day play the part on stage.”

“So when MCT announced their 2019-2020 season, I was first in line to audition!” said Arnett, who will be playing Doris in the season opener.

The role is a perfect fit for Arnett, who has been “told by many people that I have a big personality, so I took that partnered with more sass, class, and… well, you know,” she said. “But [Doris] also has a true vulnerability that comes with her friendship with the convent sisters, which had to be approached tenderly and authentically. I think I bring a strong voice, big personality, and a commitment to the role that is unrivalled.

“I am so honored to play this role and I hope I do the writers, my cast and crew, and of course Whoopi Goldberg proud!”

Leading that cast and crew is director Tom Conroy, who has brought several unique elements to this production – more comedic moments, interaction with the band leader and more.

His first experience with the musical was at a cabaret theater in Connecticut, where he was brought in to help with show. “Scene by scene, song by song, I fell in love with the heart of the show,” he said.

He shared his experience with friend and Civic’s Executive Director Laura Williamson and he was asked invited to direct this production.

“I have enjoyed rediscovering ‘Sister Act’ with our cast at Muncie Civic,” he said. “Over the six-week rehearsal period, this cast exhibited a willingness to trust my process, to be flexible with regular changes and alterations, and to inhabit this unique world of ‘Sister Act.’”

Kendra Cline, who plays Mother Superior at Queen of Angels convent, is no stranger to a world of holy rollers.

“I have played the Mother Abbess in ‘Sound of Music’ numerous times over the years so I am familiar with this type of character,” she said. “I have tried to bring that experience to this role. I have also listened and learned from Tom – the director – and tried to merge his vision of the Mother Superior with my own ideas of her.”

Cline described Mother Superior as stern and no-nonsense, but very protective of her group of nuns.

Cline loves this production and hopes audiences will as well.

“The music is wonderful and the set is beautiful,” she said. “‘Sister Act’ is filled with humor, suspense and lots of love. Everything a great show should have!”

Arnett agreed. “I want the audience to just leave the show feeling so joyful and energized that they’ll be singing the whole way home!”

Show made possible through support by: