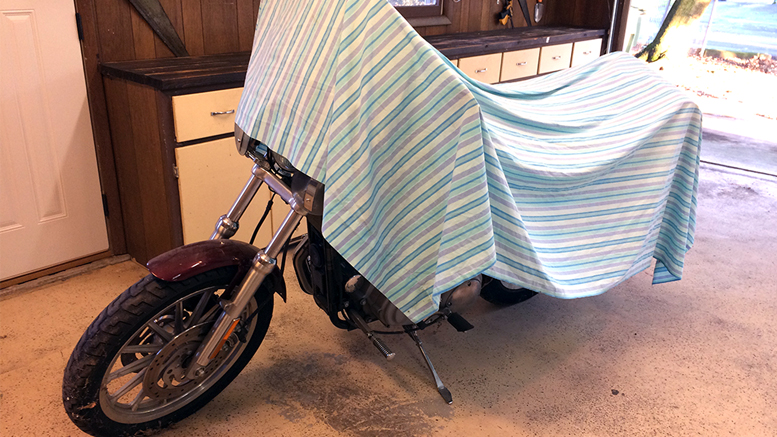 Will this baby someday hit the highway again? Photo by: Nancy Carlson

I can’t say it was “Easy Rider” that made me want to ride motorcycles.

It was a mighty Honda 50 that made me want to do that. I’m being facetious, of course. The classic Honda 50 was about as wimpy as motorcycles come. Still, one magical Saturday when our family was spending the weekend up on Kelley’s Island in Lake Erie, my Dad rented one.

There were other kids from our extended family there at the time. While I wasn’t particularly selfish, when it came to riding behind Dad on that dinky motorbike, it honked me off that I had to share seat-time with them. Still, I got enough riding that by day’s end, I was hooked.

“Easy Rider”only strengthened my feelings. I loved the looks of Captain America and Billy’s raked-out “scooters,” as we lovingly came to call them. I loved the thought of the wind flowing through my hair. I loved the possibility of cruising lonely highways, leaving my cares far behind. True, I was far less enthused about being killed by toothless degenerate rednecks firing shotguns from pickup trucks, leaving me to gurgle my life’s blood out into some country road’s stinking Hoosier pothole. That’s what happened to the “Easy Rider” guys in the end, you may recall. But that wasn’t enough to stop me from buying a dinky Honda 350 when I turned 25.

From then to now, forty-four years, there’s been a motorcycle parked in my garage every day except for one four-month period.

Next came a classic BMW R60/5 that I’d trade a significant body part to have back, then a lightning-quick Yamaha 750, eventually replaced by my first Harley-Davidson, a Low Rider. Gleaming black with red-trim, this was a motorcycle people would edge up alongside at traffic lights to stare at. Resplendent in my “Scooter Trash” T-shirt, I could tell they were thinking, “Look at that badass!” I’d relish this notion, especially since I knew that in a bar fight, my Grandma Millie could stomp the living crap out of me. When I sold that scooter four years later, figuring I was a young family man with two kids and adult responsibilities now, I should have had my head examined.

The riding life had been great fun, after all, if occasionally a little crazy. I’d even incorporated riding into my newspaper career with a weekly motorcycle column. Sitting over beers after work one day with my friend Dick Stodghill, we batted around ideas for a catchy name. A great guy but not the most nurturing of men, Stodg  gleefully proposed “Skid Marks and Screams.”

I settled for “Full Throttle,” until the column went belly-up.

Anyway, four months after selling my Harley, I was in the throes of depression. Turned out I was no longer suited for the non-riding life. The days without a motorcycle were bad enough. But the nights? They were worse. I started having nightly dreams about motorcycles. The worst were the nightmares wherein I’d gotten rid of my motorcycle, then wake up and realize it was just a bad dream and mine was still parked out in the garage.

But then I’d really wake up, realize I’d dreamt I sold it, then joyously dreamt I hadn’t sold it, then actually awoke to the bitter, convoluted truth that yep, I’d sold it, and was suddenly not just confused and despondent, but motorcycle-less.

Four months later, unable to afford another Harley, I bought a Yamaha 750, this one used. Then I bought a dressed Honda 750 touring bike, used, then a used Suzuki 850, until the day came when I finally bought my second Harley. It was a used but beautiful 1200 c.c. Sportster Sport with Screaming Eagle pipes and that beautiful V-twin rumble.

That’s the motorcycle sitting in my garage now.

For the past two-and-a-half years, though, it’s been out there under a bed sheet. Always a slow-learner, I haven’t acquired  much wisdom from life, but I have learned that riding a motorcycle is tough when you can’t throw your stubby little leg over the saddle. That’s what multiple spinal surgeries will get you. But danged if I didn’t go out to the garage the other day, gave a mighty heave to my bottom half and finally managed to straddle it.

So now … I don’t know. The vast majority of motorcycle riders quit riding by the time they’re sixty-nine, I’m sure. Part of me thinks, if I do get the bike going and start riding again, I must wear a helmet, which I didn’t always do before. Also I should wear one of those big, inflatable sumo wrestler outfits so if I run into a tree – or more realistically at my age, when I run into a tree –  there’s a chance I’ll just bounce off.

On the other hand, when a person gets to be my age, there are plenty of other joys one can embrace besides motorcycles. The beauty of a rainbow after a rain shower. Puppies and kittens innocently romping in your living room. Moaning with pleasure while scratching yourself without worrying about what other people think because now that you’re a geezer and your brain is getting soft, the rules of polite society no longer apply to you.

But I also keep thinking, don’t I have a couple old Harley-Davidson T-shirts around here somewhere with “Scooter Trash” and “Live to ride, ride to live” printed on the back?

Then I think, wonder if they still fit?