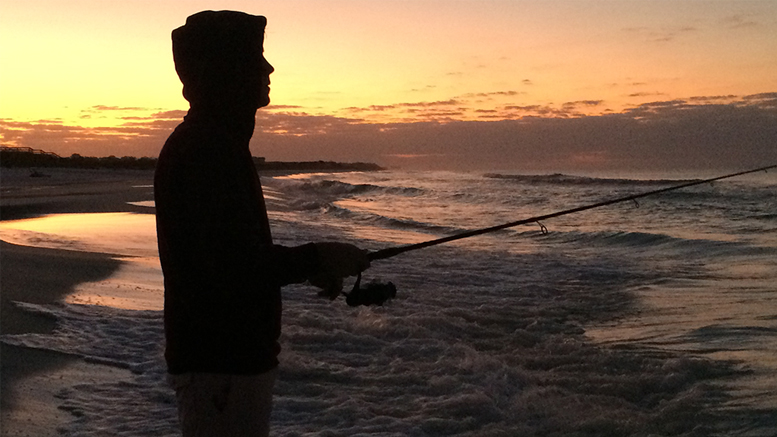 Gulf Coast fishing at dawn can be an exercise in beauty. Photo by: Nancy Carlson

If you don’t think big-water fishing requires a strong stomach, you’ve never stared into a recycled potato-salad container full of chopped up squid parts, the whole mess topped by a doleful, accusatory squid eye resting like a cherry on a sundae.

That’s a sight to make a non-angler like yours truly want to throw up, or at least throw up his hands and tell the squid, “Hey! Don’t look at me, fella! I didn’t do it!” 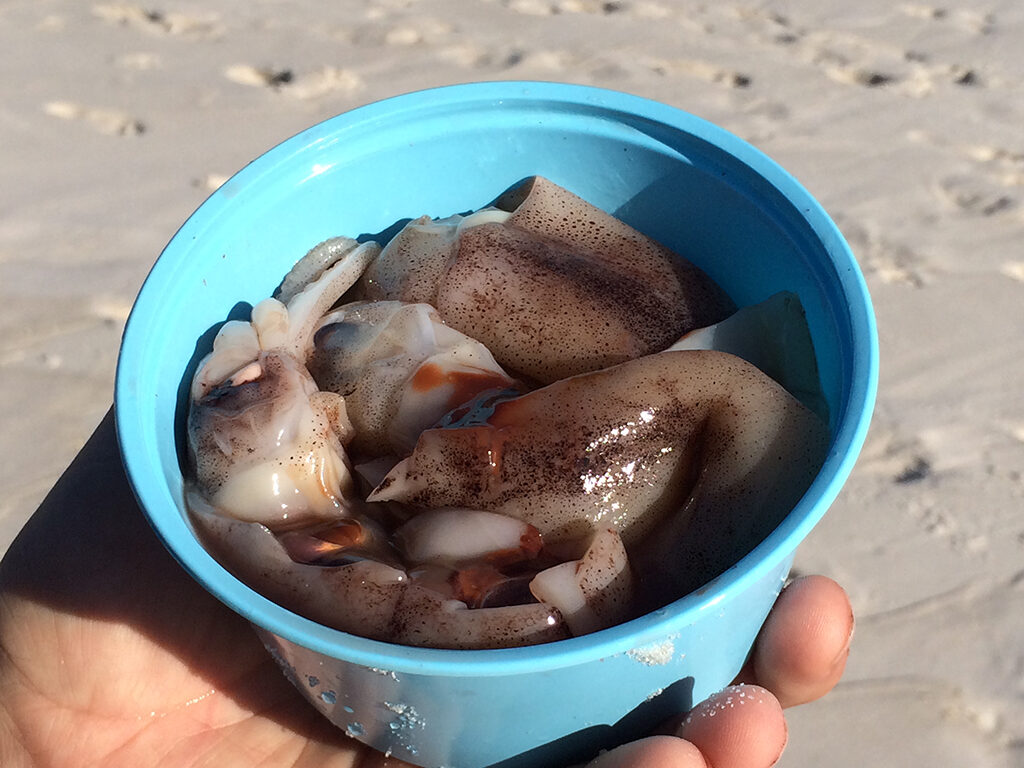 My son, on the other hand, is an angler.

Exactly how this happened escapes me. His sister Katie’s interests tend toward her work as the Marion County Sheriff’s public information officer, all things dog-related, and her passion for teaching yoga. For at least two generations, our family has been largely bereft of anglers, perfectly content to let the Gorton’s Fisherman provide our Crunch Breaded Fish Sticks.  Sure, we might drop a line if you question our manhood, hand us a fishing pole and cajole us into using it. But from our humdrum reaction, you can tell there’s no real love lost there. When it comes to liquid-related interests, we’d rather sip than fish.

During a recent trip down to the Gulf Coast of Northern Florida though, Johnny was up every morning before dawn, walking to the beach to spend a few hours rhythmically casting and reeling, casting and reeling. For all his effort, he didn’t have much luck. There were a couple decent fish on his line that managed to get away, and another he brought in that wasn’t a keeper, though he never intended to keep his catch anyway.

Oh, yeah, and there was the shark … 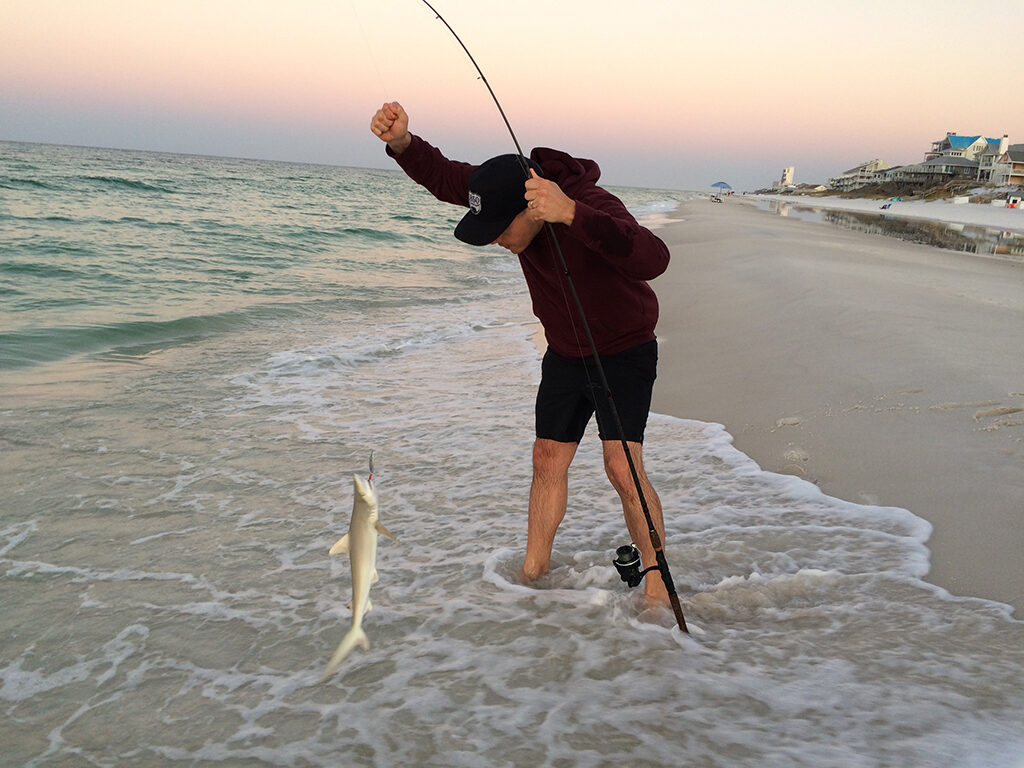 Yeah, shark. If I’m to be truthful, sharks would be my major hang-up on fishing big water. Once you get your tootsies wet with salt water, as a human being you no longer reign atop the food chain. That’s not to say Johnny’s shark posed an immediate death threat. Measuring about two feet in length, the little guy had some growing to do before he was big enough to pluck screaming people off their plastic blow-up rafts and into the drink. But as my son was removing the hook to free the shark, he took pains to avoid its two rows of glimmering, needlelike teeth. That little sucker may not have been a man-eater, but he was well-equipped to be an ankle-biter.

And its eyes! They were like a doll’s eyes!

Removing a hook from even a small shark requires caution. Photo by: Nancy Carlson

OK, OK. Diehard fans of “Jaws” will recognize I stole that description from shark-hunter Captain Quint’s script in what is the most dramatic part of the movie. On the surface, they were emotionless eyes. Unfeeling eyes. Uncaring eyes. But even as Johnny worked his pliers to remove the hook, he could sense that little shark wanted a piece of him. It was looking at him the same way the Great White Shark looked while snacking on Quint  – a tough guy who by now was, nevertheless, hollering like a sissy – as that huge fish set about sinking his boat, the Orca.

So no, I’m not a fishing fan. Still, for every negative aspect of fishing there is also a positive one, especially in fresh water. For example, Nancy, who spent hours sitting in the sand alongside our son while he fished, will never have to say, “Geez, I can’t think of anything to buy Buster for Christmas or his birthday.” Poles. Lures. Creels. A whole flippin’ boat, even. There is never a lack of stuff fishermen need or want to possess.

Also, if you don’t fish, you can’t fly fish. Even I must admit that fly fishing seems a very cool activity, it being so gracefully fluid, so contemplative and earth-centered. In a word, I guess, it’s  beautiful, though admittedly more for the angler than for the fish. Were I a younger man, I might actually pursue it.

Another positive thing about fishing, though, is all the books about it.

Regarding sports literature, conventional wisdom says the quality of the writing is in inverse proportion to the size of the ball involved. That’s why chances are you’ve never been left teary-eyed or breathless by a stirring story regarding medicine balls. On the other hand, the literary canon regarding baseball or golf is voluminous, baseballs and golf balls being relatively small .

To extrapolate, the literature of fishing is propelled by even smaller balls, like little plastic bobbers or tiny lead sinkers.  This allows readers who don’t fish to savor the activity at least  secondhand. Best of all, you don’t get fish poop all over the same hands your gonna use at lunch to unwrap your egg-salad sandwich.

Personally, I’ve been privileged to dip a literary line with Izaak Walton, whose 17th century fishing classic, “The Compleat Angler,” is an absolute treasure, despite being an occasional challenge to read. Let’s face it, spelling wasn’t well regulated back then. In those times, “fishing” could just as easily be spelled “fysshynge.”

Ernest Hemingway loved to fish, too, as anyone who has read “The Old Man and the Sea” might presume. But my preference was for his “Big Two-Hearted River” stories, parts one and two. As a rebellious Baptist kid in seventh-grade study hall, I found escape in reading about Nick Adams’ fishing passion. I could almost picture myself joining him, smoking cigarettes and eating onion sandwiches and catching the grasshoppers that would tempt the trout he watched suspended in clear, flowing water.

“They were very satisfactory,” Hemingway wrote, of Nick’s thoughts regarding the trout. Such lines read like a parody of Hemingway’s style now, but in study hall for somebody who wanted to be snatching grasshoppers with Nick?  Those lines sang like a choir.

And we certainly can’t forget Norman Maclean, who besides being a real fisherman, was a literary fisherman of the highest order. A distinguished professor of English at the University of Chicago until he retired in his seventies, only then did he take up his pen with a creative passion, writing “A River Runs Through It and Other Stories.” That little book made a whale-sized splash in publishing circles in 1976, and rightfully so. You need only read its first and last lines to see why and comprehend something of its depth and poetry and style.

“In our family, there was no clear line between religion and fly fishing,” is how Maclean begins it. He ends it with this unforgettable line: “I am haunted by waters.”

But deep down inside, I’m glad he has broken the family mold.