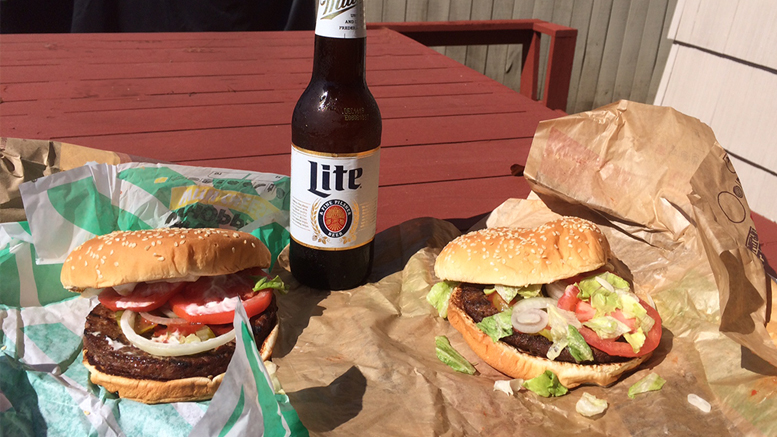 These Whoppers look alike, but do they taste alike? Photo by: John Carlson

As the chunky, semi-professional food writer once known in these parts as the Chowhound, I was going to feature a hard-hitting investigative piece about two national sandwich phenomena as the topic of this week’s column.

So, Nancy and I drove to Popeye’s on Anderson’s south side to try that eatery’s much-ballyhooed fried-chicken sandwich. This sandwich has been the darling of my fellow food writers of late. It’s even been lauded in no less august a publication than The New Yorker, on-line anyway. Naturally, I wondered why.

But there, taped to a window as we pulled into the parking lot, was a sign basically reading, “We’re out of sandwiches. Try again later.”

Out of sandwiches? We’d driven fifteen miles to get there. Still, I realized that as a mature adult, there was no point in reacting irrationally to this disappointing news. Therefore, deciding NOT to moon the kitchen staff, I hitched my pants back up behind the steering wheel and, much to Nancy’s relief, drove us home.

So if you’ll indulge me here, I just want to make a couple points, the first being that for whatever reason, Popeye’s supposed main rival in this battle of chicken sandwiches is Chik-fil-A’s. Whatever your opinion of that chain, to its credit, when you pull up to order a chicken sandwich, chances are pretty good one is eventually going to come out with your name on it.

Popeye’s right now? Not so much.

My second point is, numerous Muncie eateries offer some fine chicken sandwiches, too. A personal favorite is Twin Archer’s Buffalo Springfield, the name of which appeals to me on several levels, including “buffalo sauce,” “historic rifles” and “classic rock bands.” Also, not long ago I had a killer chicken sandwich at Roots Burger Bar, washed down with the special sauce soaking my Tater Tots. And don’t forget the chicken sandwich at Savage’s Ale House. How’s it taste? Beats me. I’ve never eaten one, but everything else Savage’s serves is delicious, so the chicken sandwich probably is, too.

But Popeye’s chicken sandwiches aren’t the only big buzz in the Wonderful World of Sandwiches these days. There is also Burger King’s Impossible Whopper, called impossible because it’s a burger made from plants, not cows. Naturally, as I drove myself to the Burger King at Nebo and Kilgore, I was feeling mighty leery of the potentially heartbreaking experience that awaited me.

“C-c-c-can I get an Impossible Whopper?” I haltingly asked the drive-thru person, expecting the worst.

Now, for some background: Of my sixty-nine years, I have been a carnivore for at least sixty-eight of them. Furthermore, there is nothing I prefer eating more than a hamburger, unless it’s a double- or triple- or even quadruple-hamburger. As for vegetarians, I like them, too. They are good, caring people. So about twenty years ago, when veggie burgers started appearing in grocery store freezers, a vegetarian friend promised me, “They’re exactly like a real hamburger! Try one!”

So I did, and it was very educational. Up until that moment, I had no idea I could gag, regurgitate and do an involuntary back flip all at the same time. That spurred a fake-meat phobia that was only heightened later when a beloved Lutheran minister brought some fake hot dogs to a church cookout. These fake hot dogs not only looked like they were made from play dough, they grilled, smelled and, alas, tasted like they were made from play dough.

Our pastor had brought us the Hot Dogs From Hell.

It was with trepidation, then, that I and my testing staff – our dogs Jersey and Toby – met on the back deck and removed the Impossible Whopper from its bag. We also removed the regular Whopper I’d bought, just in case the plant one made me gag, regurgitate and do an involuntary back flip off the deck. Both burgers were of equal heft. Unwrapping them, I also noted they looked alike, then consulted our dogs, both of whom are fluent in English.

“You ready to try this, Jersey?” I asked her, and she nodded.

“Have you ever thought about what an early veggie burger tasted like, Toby?” I asked him.

Yeah, I agreed. My first had tasted like it was ripped from a tree trunk, too.

But screwing up my courage, I took a big bite of the Impossible Whopper.

Then I did something that surprised me.

I took another big bite.

Then I bit into my regular Whopper. If there was any difference in taste between the two, it was hardly noticeable to me. By now my test assistants were drawing blood, digging their claws into my kneecaps to get in on the action, so I served them bits of both burgers and got two paws up.

What does this mean? I think Burger King has turned a major corner in the whole meat vs. veggies deal. While I’ll probably still eat regular burgers until (to borrow a turn-of-phrase from my gun-totin’ brethren) they pry my cold, dead lips from the patties, I guess it honestly wouldn’t kill me to eat an Impossible Whopper every now and again.

If that’s not a breakthrough, I don’t know what is.