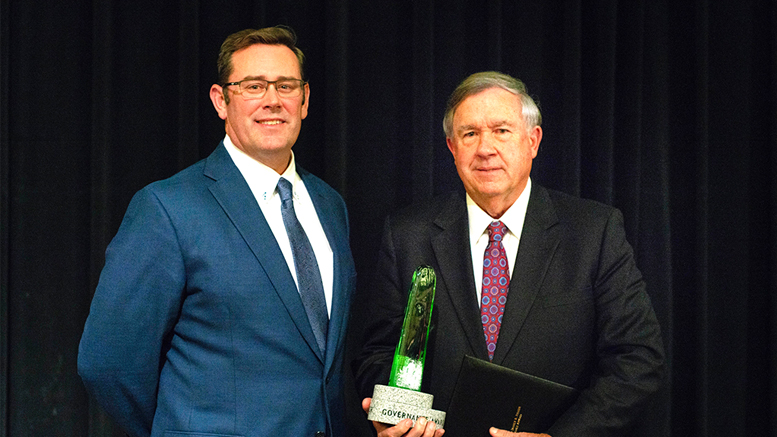 Muncie, IN — James Rosema, chairman of the Muncie Mission Ministries Board of Directors, was recognized with Ball Brothers Foundation’s Fisher Governance Award at the Chamber of Commerce’s 125th Annual Meeting Celebration on Oct. 24.

The John W. and Janice B. Fisher Governance Award is presented annually to a board member of a Delaware County nonprofit organization. Candidates must exhibit “exemplary leadership and … integrity, responsibility and accountability,” according to the foundation’s website.

“Our foundation faces a tough decision every year with so many great nominations for this award, but Rosema’s demonstrated zeal truly stood out,” said Jud Fisher, president and COO of Ball Brothers Foundation. “From his long-term dedication, to his selfless contributions to Muncie Mission Ministries, it’s clear that Rosema embodies the qualities of a strong leader.”

Rosema has served on the Muncie Mission board for 30 years, which equates toabout one-third of the organization’s existence. Throughout that time, he has served in every officer role offered on the board, including multiple terms as chairman.

“Not by coincidence, [Rosema]’s long tenure on the board has paralleled the Mission’s tremendous growth and significant milestones,” Frank Baldwin, president of Muncie Mission, said in the nomination application for Rosema. “As board chair, Jim Rosema has been an effective champion for strengthening both rescue and recovery efforts.”

Since Rosema has been on the board, the Mission has expanded its Attic Window thrift store operations, relocated its campus, transitioned to new executive leadership for the first time in nearly 30 years, and diversified the demographics served by its supportive housing program.

Rosema was especially crucial to the Mission during its 2008 move to a new campus. With a background in construction, Rosema was heavily involved in the pre-construction process and even oversaw construction of the new facility. And when the new building suffered a fire less than a year after it opened, Rosema was there to monitor the rebuild, with his own construction company volunteering thousands of hours.

“Rosema has proven himself not only as a compassionate member of his board, but also as an impactful member of our community,” Fisher said.

Rosema has also been instrumental to the Mission’s financial success. He and his wife, Mary, are the organization’s leading donors, and he led the Board of Directors to establish a long-term investment fund to further support the Muncie Mission’s future needs.

“With more than 30 years of generous and faithful support, Rosema’s community leadership, personal gifts and corporate contributions have truly enabled Muncie Mission to impact thousands of lives,” Baldwin said in the nomination application.

Previous recipients of the John W. and Janice B. Fisher Governance Award include:

Ball Brothers Foundation is one of the state’s oldest and largest family foundations. Annually, the foundation makes approximately $7 million in grants to support arts and culture, education, the environment, health, human services, and public affairs. The Muncie-based private foundation gives priority to projects and programs that improve the quality of life in the foundation’s home city, county and state.