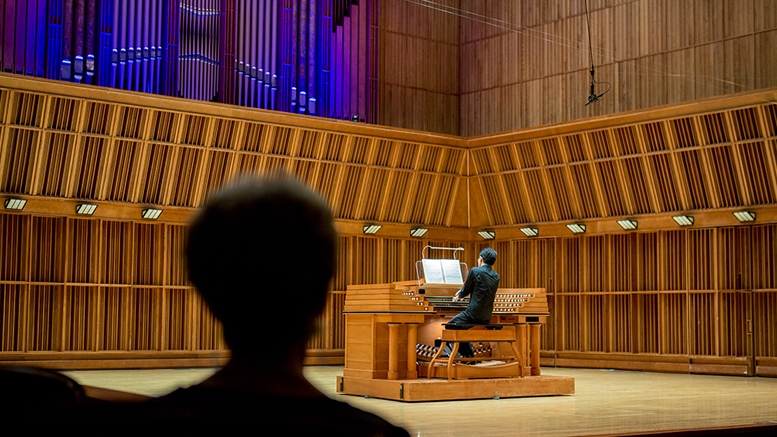 Muncie, IN– Six of the country’s top young organists will perform in the Sursa American Organ Competition on the Ball State University campus September 6-8.

The musicians will perform on a Goulding & Wood organ in Sursa Performance Hall. All events throughout the competition are free and open to the public. On the last day, the audience can vote for their favorite organist.

“We’re proud to host this competition of world-class musicians for the third time,” said Stephen Price, a lecturer of teaching organ. “This competition requires great mental focus, discipline, and courage. Each competitor will become an even better musician as a result.”

After a preliminary recorded round, the competitors were notified in July if they were selected for the semifinal round at Ball State, Price said. Since then, they have prepared the music and worked with their teachers to produce the highest playing level possible.

The organists will play for 45 to 60 minutes for three judges, whom are respected organists and professors. The finalists from each division will compete for first, second, and third place in addition to the audience prize.

The semifinal round will be Friday, September 6, from 10 a.m.-1 p.m. and 3 p.m. – 6 p.m., and will feature six pre-professional competitors between the ages of 25 and 35. This year’s competition will also include a high school division, with musicians from the Midwest.

On Saturday at 7:30 p.m., the competition judges and faculty from the School of Music will present a concert.Earlier in the day, the Orgelkids project, a not-for-profit and all-volunteer organization, will be featured in Sursa lobby from 10 a.m.- 5 p.m. The project allows participants to build a playable “mini size” organ within 40 minutes.

The final round will be held on Sunday, September 8, from 1 p.m. – 5 p.m., and audience members can listen to the organists and vote for their favorite to determine the audience prize winner.

The first prize winner of the pre-professional division will perform as a soloist with the Muncie Symphony Orchestra in Saturday, April 4, 2020 at 7:30 p.m. in Sursa Hall.

Founded in 1918 and located in Muncie, Ball State is one of Indiana’s premier universities and an economic driver for the state. Ball State’s nearly 22,000 students come from all over Indiana, the nation, and the world, and its 780-acre campus is large enough to accommodate premier facilities and 19 NCAA Division I sports but small enough to ensure the friendliness, personal attention, and access that are the hallmarks of the University.