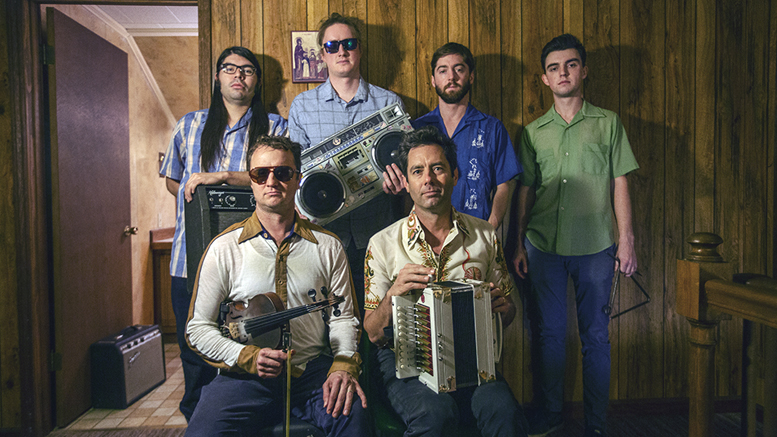 Muncie, IN—Acclaimed progressive Cajun band Lost Bayou Ramblers will be performing in a FREE outdoor concert as part of the 2019 Muncie Three Trails Music Series. The concert will take place at 7:00 PM on Friday, September 27th at Canan Commons (500 S. Walnut St.) in the heart of downtown Muncie, IN. The Ball State University Jazz Ensemble, under the direction of Mark Buselli, will open the show. This concert is presented by Ball State University.

Lost Bayou Ramblers’ evolution as a perversely progressive band rooted in Cajun traditions continues to excite, challenge, and redefine both genre expectations as well as cultural preconceptions. Their Jack White produced performance in the 2017 documentary series and on the accompanying record release American Epic helped solidify Lost Bayou Ramblers’ reputation as one of the world’s finest traditional Cajun outfits, if one of the least orthodox. With eight albums, a Grammy nomination, contributions to the score of the Oscar-nominated Beasts Of The Southern Wild, and touring with both Arcade Fire and the Violent Femmes, the group continues to swing wide from their Louisiana home base.

In 2012, with five albums under their belt, including a Grammy nomination for their 2007 release Live a la Blue Moon, the band released its most progressive and sonically experimental record to date, Mammoth Waltz. With the stylings of producer Korey Richey (LCD Soundsystem, Arcade Fire) and the help of guest artists Gordon Gano, Scarlett Johansson, and Dr. John, Mammoth Waltz was named #2 in the “Top 21 Louisiana albums of the 21st Century” by the Times Picayune. 2014 brought LBR the support slot on Arcade Fire’s REFLEKTOR tour. They also released Gasa Gasa Live, recorded at New Orleans’ uptown experimental music venue. Lost Bayou Ramblers have continually integrated new sonic elements into their live performances, always experimenting and growing the show to what it’s become today, an eclectic mix of modern sounds and rhythms with ancient Cajun melodies and lyrics, all reflected in the ambitious aesthetic reach of their latest album, Kalenda. Please join us for what is sure to be a unique and exhilarating show.