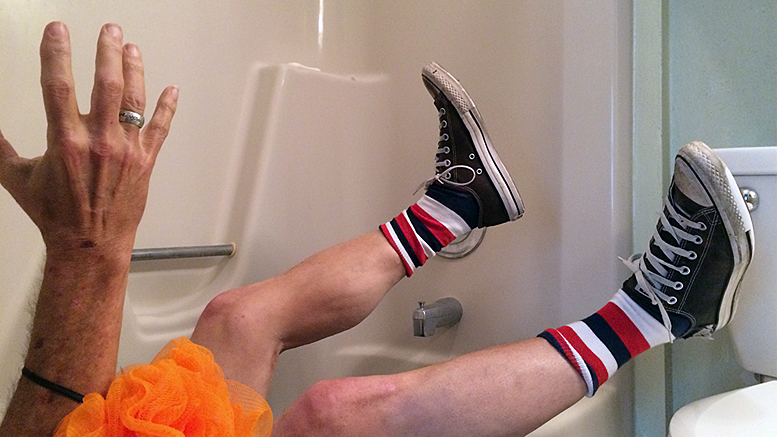 This is a recreation of Bubba’s bathtub trauma. Photo by: Nancy Carlson

They say you can learn to do about anything these days by consulting a YouTube video, and it’s true. How to build a birdhouse. How to tune your lawn tractor. How to extract a naked guy who’s stuck in your bathtub.

Yeah, that’s one, too. Not that Nancy and I have any experience with this, you understand.

But it actually worked for a couple we know by the name of, um, Bubba and Booboo. You see, it seemed Bubba was a guy whose whole life had been spent effortlessly bounding in and out of bathtubs. Then suddenly in his mid-sixties, his back began assuming the shape of a pretzel twist. Consequently, over a period of eighteen months, he underwent three spinal surgeries, all with one simple goal in mind.

Getting back to a back as straight as a pretzel rod.

Except getting to that point was easier said than done. In the early months following the three operations, his torso had all the strength and vigor of a spaghetti noodle.

Anyway, sometime around that stage of Bubba’s recovery, having tired of taking showers, he got this hankering to stretch out in a nice, steamy bathtub. So one day, Na … um, Booboo helped lower his decrepit keister into the water. After an hour or so in there, his skin was getting all pasty, so he called Booboo for help getting out. In fact, Bubba and Booboo spent a solid forty minutes trying to hoist his butt from the tub, but to no avail.

Just a year or so later, being farther along the road to recovery, plus hindsight being 20/20, Bubba looked back on that experience and decided the “Mustelidae caniform method” of tub extraction would have worked. With this method, the helper simply stands alongside the bathtub in which the disabled person is stuck, then throws in a badger.

Then he or she scoots the heck out of the way.

Meanwhile, almost magically, the stuck naked guy springs from the tub like an insanely screaming jack-in-the-box, before crashing through the bathroom door like a man afflicted with intense badger-phobia.

Had I been Bubba, even though I’m definitely not Bubba, and had Na … er, Booboo thought to throw a live badger into the bathtub, I am confident I would have extracted myself immediately. Unfortunately, the availability of badgers being limited in Bubba’s neighborhood, this wasn’t an option for him.

So Booboo, tiring of failure, finally grabbed her iPad and looked up, “How to get a stuck naked person out of your bathtub,” and dang if it wasn’t there!

Right off the bat, the site mentioned products it would have been nice to know about beforehand. You know, like grab bars and tub slings and air-filled pillows that practically float a person up to the tub’s rim-level so they can just sort of spill right out of it. But none of that was going to help Bubba now. In fact, at this point, Bubba’s situation seemed so dire, he figured the only thing that would help him exit the bathtub was an ejection seat.

But then, Na … um, Booboo read further. Arrange the stuck person’s appendages so they are hanging over the tub rim it said, or something sorta like that. Then lift them out by the most convenient appendage. In no time, with his appendages splayed, Bubba was sprawled in there like an obscene,  gigantic, Caucasian king crab. Problem was, by now he and Booboo were laughing so hard they couldn’t breathe, let alone lift.

In the ensuing minutes, grabbing almost every possible handhold available on Bubba’s body, Booboo tugged like a trouper but couldn’t move him an inch.

Finally, after nearly an hour had passed, she pulled her phone from her pocket and began punching numbers. At first, Bubba saw this as a hopeful sign..

But Booboo answered, “No. The fire department.”

And with that vision of firemen wearing helmets and carrying axes freeing his naked butt from the bathtub, and the possibility those guys drank in the same taverns he patronized, and that they loved  sharing stories from work about the pathetic losers they encountered on the job, Bubba screamed “Noooooo!!!” Painfully rolling to his knees, he abruptly lifted himself from the tub, then flopped over the side to the floor like a landed mackerel.

That’s been a couple of years ago now. While these days Bubba can get in and out of bathtubs a lot easier than during that trying time in his life, he figures why tempt fate? That’s why I’m told he’s back to always taking showers, if not for his own sake, then for Na … um, Booboo’s.