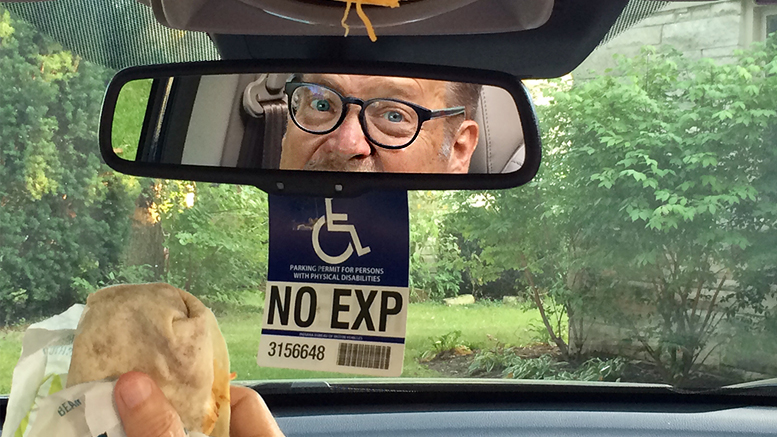 A hand holds a burrito as a taco-holder holds a taco. Photo by: Nancy Carlson

That’s how I used to react to all the hype over self-driving cars. As a longtime motorist who fully enjoys being behind the wheel, I found the very idea of self-driving cars loathsome. Young, up-and-coming drivers? My sense was they would hate self-driving cars more than anyone. After all, when I was just getting my license I couldn’t wait to be the guy in charge, burning rubber, doing doughnuts and skidding in and out of high-speed turns.

This was even though in my old ’64 Corvair, ninety-nine percent of my driving was limping home from the service station after getting it fixed again.

Anyway, recently Nancy and I bought a new car – a Honda CR-V.

As usual with me, its selection followed my rational analysis of a plethora of cold, hard, automobile facts. The first was that my favorite Indycar driver, Alexander Rossi, races with a Honda power plant. The Al-meister, as I’m sure Rossi would prefer I call him, also shares a birthdate with me. Plus there’s the fact we are both graduates of Skip Barber Road Racing School, though he has taken his career just a tad farther than I have mine.

My only racing is to the john at The Fickle Peach after too many beers.

Second, and almost equally important, my wife’s maiden name is Briggs, the same as our salesman Stacey Briggs’ last name. Painful experience has taught me you ignore that kind of karma at your own peril.

Finally – and this was the clincher – the minute Stacey laid eyes on me waddling over, he sized up what automotive features would be of utmost importance to me, then pointed out this car came equipped with both taco and burrito holders.

“Seriously?” I gasped, my knees buckling, before he went on to note the holders also work for sunglasses and coffee cups.

Now, before I’m accused of using my column to sell Hondas, allow me to note that all manner of cars today –  Chevrolets, Fords, Toyotas, Buicks, Kias, Jeeps, Mazdas, Volkswagens, Cadillacs, Hyundais,  BMWs, Dodges, Lexuses, GMCs, Fiats, Chryslers, Subarus … and the list goes on – are probably fine vehicles, too. The 2010 Chevy Malibu we traded in was a great car that barely gave us a lick of trouble in 184,000 miles.

But this new Honda, which was built in Marysville, Ohio? It’s a pretty sweet ride. It also has a mind of its own.

Say I’m motoring along when, with my left hand, I reach across my belly to grab my Taco Bell XXL Grilled Stuft Burrito from its holder. One bite and I’m thinking, “Man. That’s good!” So then with my right hand I grab my Cool Ranch Doritos Locos Tacos Supreme from its holder and start taking bites of it, too, all while whizzing past trees, houses and cows.

Turns out while I’m stuffing my face, the car’s “lane assist” feature is directing my car down the middle of my lane. This is why I’m still alive to scream, pitch my taco and burrito into the back seat and grab the wheel, instead of being smashed between two mangled tortillas.

Then there’s the road departure “mitigation” system. Say on the way home from work, you pull into Greek’s Pizzeria and order a Double Decker BBQ Pork Pizza with a side of boneless wings, just to tide you over until suppertime. But while pulling a slice from the box, piping hot mozzarella cheese slides off and lands directly on your crotch, causing you to jerk the steering wheel in instant agony. But just as you are about to fly off the road, the steering wheel shakes with authority, causing your pizza slice to smack you upside the head like it does to that dopey roller-skater in the Tums Chewy Bites commercial.

Thus, you are reminded to begin steering again.

Or say you are in a McDonald’s drive-thru lane, having just ordered a Big Mac, large fries and a milkshake. Then you begin having second thoughts. “Maybe I should have ordered a Quarter Pounder with Cheese and a Double Chocolate Muffin Topper, too!” you think, as your foot inadvertently slips off the brake pedal.

And yet, instead of ramming the hoodlum in line ahead of you as he’s sneaking a bite of his Filet-O-Fish sandwich and getting tartar sauce all over his brass knuckles, your car safely stops short of his bumper due to its “low speed follow” feature.

Then there’s the Bozometer. It’s linked to your backup camera which, if you’re about to back over  someone who is carrying an extra-large Salted Caramel Truffle Blizzard out of Dairy Queen, sharply warns you to, “Look out, Bozo!”

OK, actually it just beeps, but you get the idea.

So what have we learned from this?

First, I think way too much about food, and I haven’t yet even addressed the issue of driving safely while scooping up handfuls of KFC’s mashed potatoes using just your fingers. Second, we’ve also learned that under certain circumstances, self-driving features can be a good thing, and the need is only accentuated as you age. So while I’ll never totally embrace self-driving cars, our new Honda has shown me I can’t ignore its considerable benefits, either.