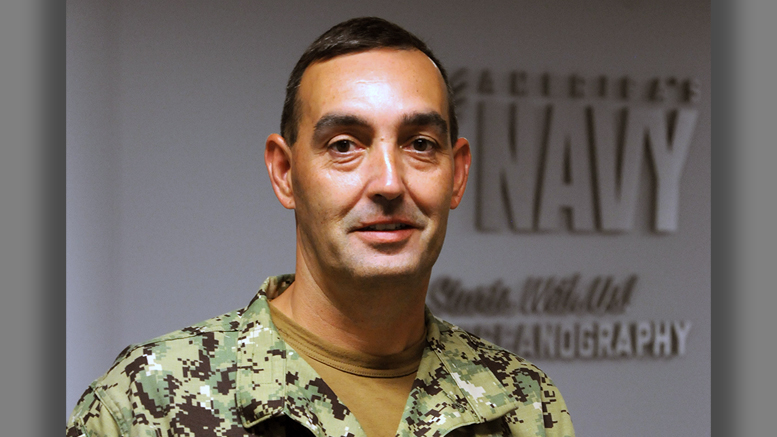 Stennis, MS – Most Americans rely on weather forecasts to plan their daily routine. The U.S. Navy is no different. With numerous ships, submarines and airplanes deployed around the world, sailors and civilians serving with the Naval Meteorology and Oceanography Command at Stennis Space Center, Mississippi, advise Navy leaders about the impact of ocean and atmospheric conditions on future operations.

Lt. Jeffrey Dodson, a 1992 Muncie Central High School graduate and native of Muncie, Indiana, is one of those responsible for providing timely, comprehensive and tactically relevant information for ships, submarines, aircraft and other commands operating throughout the globe.

As an intel officer, Dodson is responsible for being the liaison officer between the active duty forces and the reserve forces.

Dodson credits success in the Navy to many of the lessons learned growing up in Muncie.

“Growing up I was taught to have pride in your work, community and your friends,” said Dodson. “The way you carry yourself and how you treat others can go a long way.”

“Naval Oceanography defines and applies the physical environment for the entire Navy fleet from the bottom of the ocean to the stars,” said Rear Adm. John Okon, Commander, Naval Meteorology and Oceanography Command. “There isn’t a plane that flies, a ship or a submarine that gets underway without the sailors and civilians of Naval Oceanography.”

Dodson is playing an important part in America’s focus on rebuilding military readiness, strengthening alliances and reforming business practices in support of the National Defense Strategy.

“Our priorities center on people, capabilities and processes, and will be achieved by our focus on speed, value, results and partnerships,” said Secretary of the Navy Richard V. Spencer. “Readiness, lethality and modernization are the requirements driving these priorities.”

Though there are many ways to earn distinction in a command, community and career, Dodson is most proud of being accepted into the Navy as an intelligence officer.

“After serving as an Army intelligence officer and Marine Corps intelligence specialist, I am proud to be able to continue my service in the military,” said Dodson.

Serving in the Navy is a continuing tradition of military service for Dodson, who has military ties with family members who have previously served. Dodson is honored to carry on that family tradition.

“Only a couple family members have served, for a short period of time, when they were younger and their sacrifice and patriotism gave me the motivation to serve,” said Dodson.

As a member of one of the U.S. Navy’s most relied upon assets, Dodson and other sailors know they are part of a legacy that will last beyond their lifetimes providing the Navy the nation needs.

“Serving in the Navy means that I am part of the best fighting force in the world,” added Dodson. “I am surrounded by professionals who are willing to give everything to protect us from harm.”