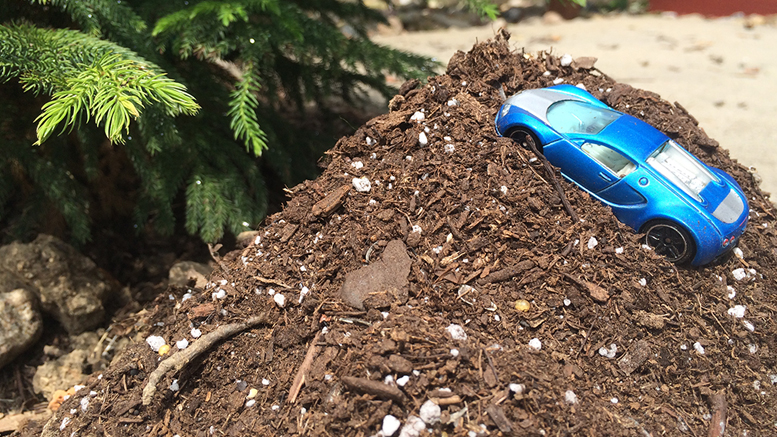 This photo is NOT of the Carlsons racing up Pikes Peak. Photo by: John Carlson

With our beloved Chevy Malibu pushing 183,000 miles on the odometer, and my automotive-maintenance skills amounting to what’s generally referred to as “diddly squat,” we’re going to be car shopping soon.

We’ll probably be looking at smaller ones.

Turns out sizable vehicles just aren’t a good fit for me anymore. Take my GMC Sierra pickup truck. With me standing only three-feet-six – OK, I’m actually a towering  five-feet-six, but who’s counting?  – I can barely see out its driver’s side window. Consequently, after owning that truck for twelve years, I can count on one hand the number of times I’ve managed to park it between the white lines.

So, smaller it is. Not a whole lot smaller, though. Nancy and I know what that’s like.

Earlier in our marriage, way before we could afford a dented pickup truck and a Chevy Malibu with 183,000 miles on it, we owned a ‘Vette.

Not a Corvette. A Chevette.

Frankly, I loved that boxy little four-banger with the four-speed manual transmission. It seemed like I could park it blindfolded between the white lines and have three feet of space to spare on all sides. Furthermore, it was reliable as all get out, delivering me to work each day through snow, rain, heat, sleet, meteor showers, twisters, hurricanes or gloom of night.

There came a day, however, when with four of us in that little car, we drove it on vacation out to Pike’s Peak in Colorado. Right from the start of our planning, that trip seemed pretty ambitious. We realized taking the Chevette was going to limit our luggage to a bag of apples, four deodorant sticks, plus a single change of socks each. That’s why we soon drove over to Sears and dropped a hundred bucks for a fancy, strap-on, luggage carrier.

That thing turned out to be a lifesaver. This was even though it looked rather stupid on the Chevette, like some big clown hat on a vehicle that thirty Bozos honking horns and wearing big red noses might come pouring out of at a stoplight. On the other hand, having room for a well-stocked cooler and camping gear, along with reserve boxes of assorted Little Debbie snack cakes, made it all worthwhile.

On the appointed day, our vacation trip began grandly, with all four of us – Katie, Johnny, Nancy and me – wedged into the car and basking in the pure familial joy of each other’s company. We laughed. We shared our deepest thoughts and feelings. We talked about things at school. We talked about things at work. We especially talked with mounting excitement about what fun adventures awaited us on that towering peak out West in Colorado Springs.

This lasted almost ‘til Daleville.

After that, I came to a realization: It could have been Pope Francis, Mother Teresa, Billy Graham and the matronly hostess from “Romper Room” riding in our Chevette. But within thirty miles, they’d have been cussing, sneering and bitching at each other, too. Our car was just packed too tightly for conviviality’s sake, you know?

Looking back on it now, that trip seems like a blur of insolence, peevishness and crappy karma, but after a couple days of gritting our teeth, there was Pike’s Peak, looming ever larger in our Chevette’s front windshield. Arriving at the foot of it, we wasted no time in joining the line of traffic starting for the top, and soon found ourselves inching above the tree line.

It was there I learned two other things: First, you may think you’re an advocate of good old-fashioned  parental discipline. However, it’s hard to stay pissed at your kids when you’re convinced that any second, you’re all going to wind up squished together in your Chevette at the foot of Pike’s Peak, looking  like a big bloody can of ravioli. Second, just as an aside, do you know there are professional drivers who race up Pike’s Peak’s 14,000 feet at breakneck speeds? Try as I might, I can’t recall what they’re called …

You really must drive up it yourself to understand how crazy that whole racing notion is. From the driver’s seat, going up the mountain, your view through the front passenger’s side window is like looking out of an airliner, with nothing to see below but sky and the distant horizon miles away. I’m not sure any of us in that little Chevette made a squeak the whole final 7,000 feet up.

The month was August, but it was snowing when we finally reached the top. Slipping and sliding through the slush on our way to the visitor’s center, I was disturbed by what I found.  Most of the key chains, refrigerator magnets and other souvenirs for sale played on the notion of passenger cars going over the side.  All featured cartoon images of screaming drivers awaiting their fate, their hands clutching the steering wheel in death grips.

Naturally, Katie and Johnny loaded up on as many of those hilarious baubles as they could carry. Nancy bought herself some post cards. As for my favorite souvenir, it was the view on the way back down, where a driver could see he wasn’t suspended in mid-air after all, but that Pike’s Peak actually sloped to the forest floor far, far, far below.

Sure, had you gone over the side you wouldn’t stop rolling until Kansas City, but still …

Anyway, whatever new car we buy, I kind of doubt Nancy and I will ever drive up Pike’s Peak again. But if I’m out there shopping and run into a familiar-looking Chevette for sale, well, you never know.

A former longtime feature writer and columnist for The Star Press in Muncie, Indiana, John Carlson is a storyteller with an unflagging appreciation for the wonderful people of East Central Indiana and the tales of their lives, be they funny, poignant, inspirational or all three.  John’s columns appear on Muncie Journal every Friday