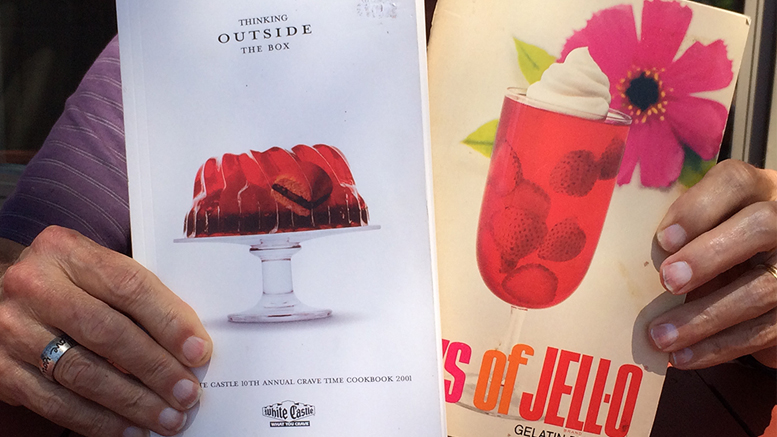 The most enticing Jell-O dish I have ever seen was on the cover of a little cookbook called “Thinking Outside the Box,” given to me by the delightful Julie Kappel Maugherman. Pictured was a platter topped with an exquisitely molded crimson Jell-O.

Suspended in the middle of that Jell-O was a White Castle slider.

This was a molded mound of Jell-O that could make the heart of any White Castle addict go pitter-patter. But while the cookbook included recipes for yummy dishes like Slider Strata, White Castle Soufflé and my favorite, White Castle Asparagus Melt, none of the recipes actually featured a White Castle slider stuck inside Jell-O.

Handing me a cookbook shortly thereafter was my Fickle Peach buddy Lohren Deeg, who as far as I can tell has eaten in ninety-percent of the restaurants in the United States. It’s like, casually mention you’re gonna be dining at Goofy’s Grub ‘n’ Pub in Moose Toots, Montana next week, and Lohren will insist, “Don’t forget to order the Badger Balls!”

The book he loaned me is Altrusa Club’s 1983 copy of “A Cooks Tour Of Muncie.” It was found by Lohren’s sister, in the stacks of a used bookstore in the town which served Muncie its historic basketball butt-whoopin’ in the 1954 state championship game.

Naturally, this discovery set my mind a-whirling with probing questions, like how’d those country bumpkins ever beat our young urban sophisticates, and was Jell-O a thing back in 1954?  The answers: Uh, I dunno, and heck yes it was a thing back in 1954. Americans have been slurping Jell-O since 1897. As a result, the Altrusa cookbook featured no shortage of Jell-O salads. While they didn’t sound particularly enticing, the Whiskey Sour Punch recipe a couple pages back likely kept the club ladies’ spirits high, spiked as it was with a full quart of Satan’s own elixir.

All of which leads up to the fact that at a family gathering recently, Nancy and the other legendary Briggs Sisters steamrolled through their respective houses collecting Bingo prizes. They gathered what seemed like hundreds of prizes, many among them the most pathetic ones in the history of Bingo. These prizes were so bad, instead of hollering “Bingo!” when the little markers filled a row on your game card, most of us just hollered, “Aw, crap! I won again.”

My top prize of the night was a little book called “Joys of Jell-O.”

So, yes, my life has been rich in Jell-O literature lately. But while I’ve slurped my share of the stuff over the years, I can’t say I’ve ever been committed to deeply exploring what the Jell-O experience means to me. Still, at first glance, “Joys of Jell-O” promised to take my appreciation to a whole new level. Anybody who could come up with ninety-six pages of words written regarding Jell-O, even if they were recipes, had to have some pretty deep-seated Jell-O insights, I figured.

I figured wrong, though. Along about page forty, I was in what you might call “intense Jell-O burnout.”

It wasn’t that I considered myself too hifalutin to appreciate Jell-O. Trust me, I like jiggly things as much as the next guy. But there were only so many ways you could make a book full of dishes named Hawaiian Eyeful or Cherry Cheese Charmer sound interesting. At least they sounded sweet, though.

But then the veggie Jell-O recipes started cropping up. These resurrected disturbing memories of sitting down to Sunday dinner at my Grandma Smith’s place as a kid. In all other respects an outstanding cook in the country-wife mold, Grandma’s chicken-and-dumplings, beef roasts and meatloaf had us all salivating salaciously right there on her tablecloth. But when she’d get around to passing her dinner Jell-O?

“Geez, Grandma,” my sister Patty and I would sneer. “What’s a stinking carrot doing in here?”

Guess we should have counted our blessings, though. Like I said, Grandma was a great cook. She could have served her meatloaf enveloped in Jell-O like a certain White Castle slider, and I would have dug it out and enjoyed every bite. But veggies? Nah.

It gets worse, though, and it all comes down to one word: seafood.

Looking through “Joys of Jell-O,” I encountered a molded ring, the center of which was filled with shrimp. Now I can eat myself some shrimp dug from St. Elmo’s blow-your-brains-out hot sauce, and relish every brutal bite. But shrimp resting in Jell-O? Nope.

And then popped up the recipe that, for me, marked the coup de grace.

Ring Around The Tuna.

Was nothing sacred? With the melding of Jell-O and tuna, the writers of “Joys of Jell-O” had gone way too far. It was nothing less than a pathetic, preposterous pairing! Why, if that kind of crazy thinking had been around when Reese’s Peanut Butter Cups were invented, who’s to say they wouldn’t have ended up a combination of chocolate, peanut butter and … what?

Which, now that I think about it …