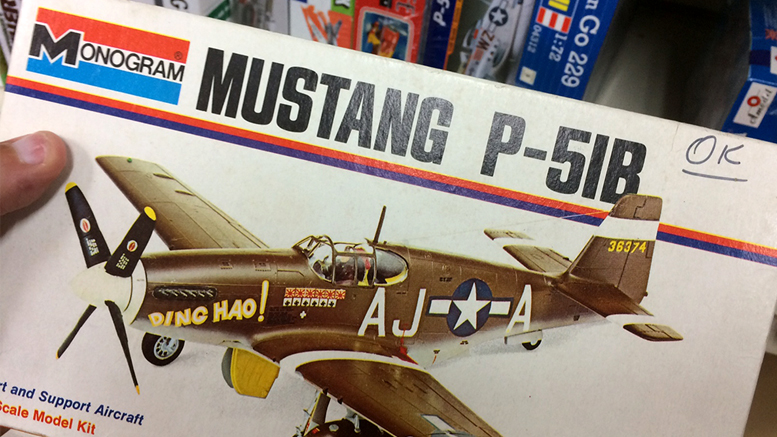 As a person known for being an energetic “go-getter,” I have very little spare time.

OK, that’s not true. Actually, as a non-energetic retiree pretty much known for being a human lump, about 99.9 percent of my time is spare. But sometimes, when I am looking to fill that time with something besides recounting the lines between the bricks in our fireplace, I consider building a plastic model airplane.

Then I hesitate. Is model-building even a thing anymore?

About everything else we once held near and dear seems to have been flushed down life’s commode. Models? In popularity they have probably long since been replaced in favor of exciting new computer apps like “Guess What’s Next For Extinction?”

But when I was a kid back in Abraham Lincoln’s day, models ruled.

Lots of them were car models. For me, car models lost their appeal the day I brought a Ford Edsel kit home to my Dad, a career General Motors guy, and he locked me out of our house for a week. Just kidding. Still, he convinced me if I wanted to keep receiving my allowance, I’d better switch to less offensive models like airplanes.

In no time, model airplanes consumed my waking hours. For birthdays, Christmas and such, I’d receive models made by companies like Revell, outlandishly expensive kits that could cost upwards of three and even four bucks. Up at The Corner Store, meanwhile, not only were there vanilla Cokes, candy cigarettes and a trove of girlie magazines available for kids’ edification, but we could also buy basic little wooden airplane kits for just thirty-nine cents. Having been born without a woodworking gene in my DNA, mine always turned out looking like amoebas with propellers.

Ahhh, but the mid-priced Aurora models! Those babies were the highlight of my young life.

My favorite day to buy one was always George Washington’s birthday. Mom had established a yearly tradition with my kid sister Patty and me. We’d ride the bus to downtown Elyria, then grab lunch at the counter in Woolworth’s. After that we’d spend about twenty minutes shopping. Just seventy-nine cents would buy me a World War One-era German Albatross D.V. kit, or maybe a British Sopwith Camel, or perhaps a French Nieuport 28.

Looking back now, I can see where building model airplanes taught me many things about the flying machines that would later become my obsession. I learned about airplane parts, for example, and what they were called and what they did. And I learned something about sticking to a project once you had started it.

But that’s not all.

At age ten or eleven, building model airplanes also taught me how to cuss like a (bleep-ing) sailor. Especially with biplanes, I would work carefully, laboriously, to glue the spindly interplane and cabane struts to the bottom wings and fuselage, then gingerly attach the top wing in perfect alignment before  waiting for the glue to set. Then Mom would call us for lunch, feed us some frozen fish sticks and send us on our way. Then I’d go back to my model and gasp, the upper wing often having collapsed onto the fuselage like it had been stepped on by Godzilla.

Then I’d just naturally start spewing words like “&^%$” and “#$@%^” and even entire phrases like “@^%$# &*()$#  the %^$#@#* sonofa@%!&$!” These were words I’d never even heard before, much less spoken. But suddenly they began spilling out of me, like my mouth was some kind of automatic vile language dispenser. Having sat through three Baptist sermons a week for my entire life up to that point, I figured our pastor was right. With this proof of my inherently sinful human nature, I was surely headed for hell.

Later, as I got into my teen years, building model airplanes also gave me my personal introduction to the mind-bending hippie experiences that were about to stone my generation. I remember this like it happened yesterday.

Crouched on the floor of my bedroom, I was working on a Revell model of a Lockheed Electra, bent closely over the little table my kit was resting upon. It was steamy hot, with no air conditioning. For half an hour I was slowly, carefully applying model airplane glue before delicately piecing together complicated components.

Then all of a sudden I noticed my head was bouncing against the ceiling, just bobbing around up there like a helium balloon, staring back down at myself sprawled on the floor in my paisley Bermuda shorts and my Red Ball Jets.

I don’t want to say I was totally out of my gourd from an accidental glue high. Nevertheless, at the same time this was happening, inside my head Donovan and the Beatles were singing “Mellow Yellow” and “Lucy In The Sky With Diamonds,” years before they were even written. Did this experience change my life? Naaah, not unless you count the facts that for a week I wore sunglasses everywhere, started addressing my father as “Hey, man” or “daddyo,” plus my school grades tumbled to Ds and Fs from what had been solid C-minuses.

Anyway, after that I was “one and done” with all mind-altering substances except Budweiser.

Now, it’s been many years since I’ve built a model airplane. But it turns out you can still buy them downtown at Toys Forever Models & Hobbies. And if you want to see some truly incredible ones, Muncie is very fortunate to be the home of the Academy of Model Aeronautics out at 5161 E. Memorial Drive. Visit and you’ll encounter an amazing level of craftsmanship, in some cases right down to the recreated rivet lines and the engine exhaust marks scorching the fuselage.

Put another way, none of them appear to have been stepped on by Godzilla.