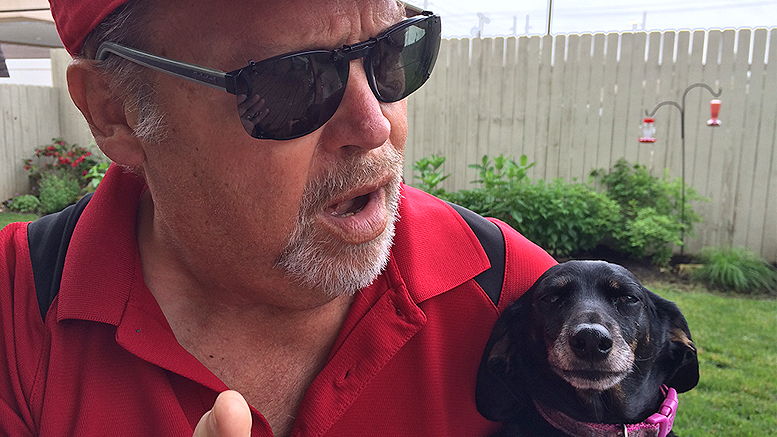 An exasperated Jersey listens before responding to me. Photo by: Nancy Carlson

It struck me recently that, if I am ever secretly recorded in my own home during the course of a regular day, the fellas in white coats may haul me off to the proverbial funny farm.

Depending on the circumstances, dogtalk can involve anything from channeling Jersey and Toby’s reflections on puppyhood to their requests for dinner, and even their blasphemous responses when they don’t get what they want. For example:

“What’s Jersey hungry for?” I’ll ask her, all cordial like, in a typical supper encounter.

“No!” I will respond, sharply. “That’s my leftover taco!”

To which, through me, she’ll snarl, “Up yours!”

Then grabbing a paper plate, I’ll lovingly spoon her up a yummy clump of nice, stinky ALPO.

So, yeah, when you get right down to it, dog talk is basically “Psycho” talk. You remember that classic Alfred Hitchcock horror film, right? You’ve got the mousy little Bates Motel dude who keeps getting all  exasperated with Mother, because he’s thirty-five years old and hasn’t been on a date yet. Except Mother is always riding him about how he has to stay home with her because she needs him, despite his being such a weirdo. Except even though he’s a weirdo, he’s a weirdo with gumption enough to proactively hack Janet Leigh to pieces in the shower when Mother “tells” him to, then deep-six her in the swamp out back. Except Mother didn’t exactly tell him to do any such thing, since by now she resembles a human prune with skin as tough as a Hacky Sack’s, having been sitting around dead in a rocking chair for a decade or so.

Turns out, while channeling Mother, the little “Psycho” guy had told himself to do the nasty shower thing, plus sink Janet in the swamp.

That’s sort of exactly how I am with our dogs, minus the shower, the swamp and the knife.

Of course, in my opinion the dogs are mostly to blame for this, simply because they are dogs, and thus fairly bursting with personality.  I’ve had goldfish before, but have never particularly wanted to channel fishtalk. Neither have I channeled parakeettalk, gerbiltalk, or hamstertalk. Nor did I channel rattalk for the biology-lab rats my Grandpa Smith “liberated” for me as pets from his gig as a high school janitor way back when I was a kid. However, I was tempted to channel Mommy rat once, the day she caught Daddy rat snacking on some of their tiny pink baby rats, which she, or maybe I, thought was pretty uncool.

But what would she have said through me? “Honey, please stop eating the children”?

Then there’s cattalk, except I’m not sure cattalk is even a thing. If there is, I think cats would make me channel snide, caustic comments in keeping with my generally sketchy opinion of their personalities. You know, cattalk like, “Sorry, I only interact with smart people, dimwit,” or, “Stuff a sock in it, fatso,” or even a simple, “Hey, you ugly.”

I mean, who needs that from a cat?

But it’s amazing the things our dogs will say through me. Like, in a bid to teach him something about working to achieve one’s goals in life, Nancy will hoist Toby’s flabby backside halfway onto the couch. Then she’ll announce, “Okay, Tobes, now you have to haul your blubbery bickets up the rest of the way yourself.”

Then when he finally makes it up, Nancy will proudly exclaim, “You did it!”  And for Toby, I’ll disgustedly reply, “Yeah, by the skin of my frickin’ teeth, toots!”

Or like on any given Wednesday evening I’ll say, “Jersey, could you please quit incessantly barking out the window at the neighbors when Daddy’s trying to watch ‘Chicago P.D.’?”

But with her pouty bottom lip stuck out, via me and dogtalk she’ll respond, “Aren’t I more important than some dumb weekly police drama?”

So I’ll patiently explain, “Sure you are, honeybunch! It’s just that, with all that noise you’re making, Daddy can’t hear why his favorite television cop, Sergeant Hank, is pounding the poop outa that perp.”

“I love Mommy way better than you.”

Then I’ll think, you know, one of these days I’ve gotta start speaking strictly for myself.