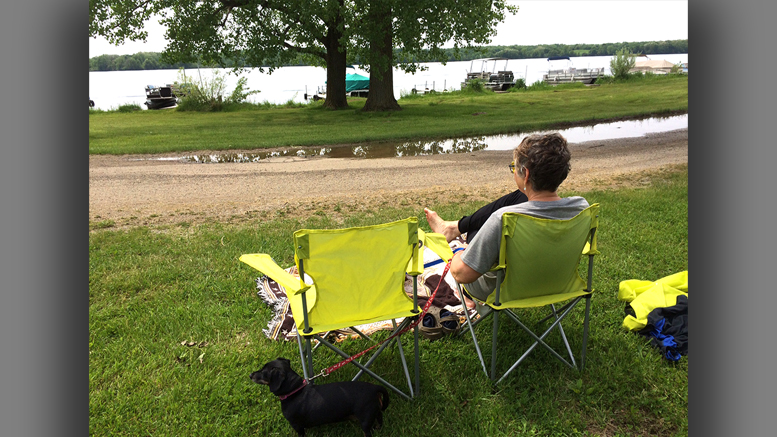 Our place out at the lake features a bunch of fresh air. Photo by: John Carlson

After working hard all our lives, Nancy and I are committed to spending our retired years in luxury, regardless of the costs.

Take our fancy summer place out at Prairie Creek Lake …

As you can see in the photo above, it has a great view of the water, plus a couple nice trees, and our furniture is first-class. Our bathroom? Obviously, we’ve gone with a rustic decor, fully incorporating all sorts of handy bushes nearby. Kitchen facilities? Until Heinee’s reopens on the eastern edge of the lake, our kitchen is just a mile or two up Burlington Drive at Hunnicutt’s Dairy Bar, where the soft-serve flows like wine. And the ambience? It’s as agreeable as you are with whomever you happen to be shooting the breeze.

I will concede, of course, that our lake place lacks the sense of permanence of others owned by folks who have more money invested in their property. Those places include the homes, many of which are very fine. It also includes the recreational vehicles parked at the campground. Sometimes they can look a little crowded to me, but when we drive past, the folks who own them always seem to have smiles on their faces.

Nancy and I aren’t jealous of them, though.

Early on, we made the choice to live in the city. This was because I have been diagnosed with a serious physiological problem whereby I break out in hives whenever I’m more than three minutes from the nearest Pizza King.

Of course, homeowners on the western edge of Prairie Creek Lake always discount an argument like that as vapid. “John,” they tell me, “this is gonna come as a shock, but there’s a whole lot more to life than stuffing your face with sixteen-inch Royal Feast pizzas all day long. Do you have any idea what it’s like to pour a cup of coffee first thing in the morning, step through your doorway and gaze east, watching the dawn sun rise over the lake through a splendid sky awash in brilliant cloud layers of purple, pink and gold?”

Then I will admit, “No, I don’t. But I’ll tell you what I do know. I know what it’s like to stand on the western edge of Tillotson Avenue, gaze east across the street and see the dawn sun rise over the new Dunkin’ doughnut shop reportedly sprouting from the pavement of the old Burger King just a half-mile from my house.”

OK, so that’s not quite imbued with the same sense of poetic wonder as the lake-livers’ colorful dawn experience and all that crap, but what the heck?

For us, just being out there an hour or so is enough to de-stress another brutally hard day of retirement. Yes, I’m being sarcastic. Since retiring we’ve had it whipped, and I mean that in the most positive way possible. Many summer days, the most stressful decision I face is picking which color Popsicle to slurp next.

But it’s true that I’ve appreciated Prairie Creek Lake for as long as I’ve lived in these parts. As a young reporter, I was basically introduced to it by Superintendent Ron Bonham, who loved the place more than anybody else has, or ever will.

My first impression of Ron, who would also serve as a county commissioner, was I couldn’t believe a man of such distinction could be so downright friendly. I mean, talk about a fine Hoosier pedigree! A member of the vaunted Central High School Bearcats, he’d been chosen Indiana’s Mr.Basketball in 1960  and played on the University of Cincinnati’s national championship team in 1962. Then he won two NBA championships playing for the Boston Celtics, before adding another notch to his basketball career with the Indiana Pacers.

Anyway, it’s because of Ron I know his beloved lake is home to some whoppers, and I don’t mean fish stories. On several occasions I watched him out there stocking the lake with thousands of fish, from fingerlings to brawny bruisers you wouldn’t want latched onto the end of your arm. Working in waders alongside his employees, he looked like a kid in the proverbial candy store, moving the fish from their transport tanks into the place that so refreshed his soul.

Now that there are bald eagles out there, too – a spectacular sight, but something I wonder if Ron was privileged to witness much of before dying of liver cancer in 2016 at age seventy-three – the lake seems extra special.

Guess between fun, peace and the chance for reflection on the magnificence of nature, despite the fact the lake required some human help to get the water out there, Prairie Creek offers something for everyone.

So even though Nancy and I don’t live out by it, sitting in the grass near shore a couple weeks ago, the sense of goodness was palpable. Pontoons plied the calm water. A father, mother and son chased a Frisbee through the soft grass of a gently sloping hillside. A couple older fellows under shade in the campground waved when we drove past. A young man and woman walking a stretch of gravelly road smiled at two strangers seated in their temporary lakeside place, and commented on what a beautiful day it was.

And know what? They were absolutely right.