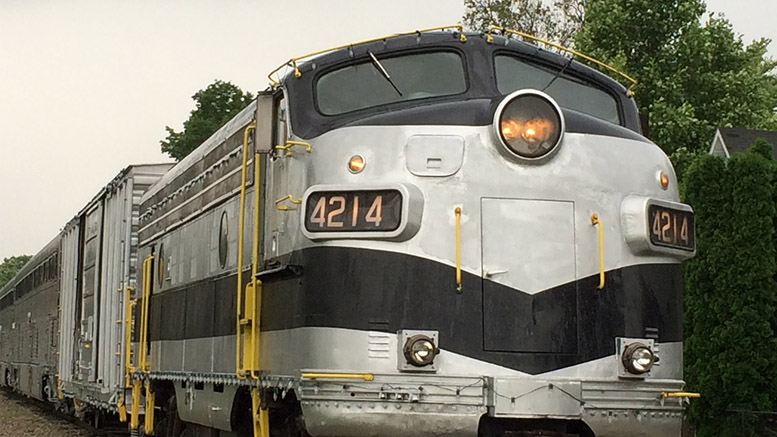 The Nickel Plate Express is an impressive-looking train. Photo by: Nancy Carlson

For Father’s Day, my wife bought me a train ticket.

Consequently, shortly after nine o’clock in the morning last Saturday, Nancy and I arrived in the tiny town of Atlanta, Ind., where men in bright green safety vests were preparing the Nickel Plate Express for another run down Cicero way.

Now, I must tell you this about the Nickel Plate Express. It doesn’t exactly rival The Orient Express for  luxurious rail travel.

On the other hand, the tickets Nancy bought us cost just twenty dollars each. The last time I checked, tickets for The Orient Express sold for as high as 7,000 English pounds, which in international monetary terms translates into what’s known as a “crapload” of money. Plus, if there’s any truth to Agatha Christie’s famous mystery novel “Murder On The Orient Express,” there’s an excellent chance somebody is going to kill you on it.

All of which makes the Nickel Plate Express look pretty darned good.

In boarding, we made our way up a steep, narrow stairwell into the dining car. Then we navigated a narrow aisle past delicious-looking doughnuts stacked in clear plastic containers and, alas, reached our assigned seats mounted alongside fixed dining tables. OK, I’m not going to sugarcoat this part. My seat could have been perfectly adequate. This would be assuming my nickname was Stringbean, and I was  that skinny fella who used to be on the old “Hee-Haw” show. But as it was, Nancy and I were seated in pitifully small gaps of space into which no self-respecting chunky person such as myself should be forcibly wedged.

So let me offer you some advice. If you buy tickets for the Nickel Plate Express – and I think you should, because the people who run it are cool, hard-working, civic-minded folks with what amounts to a treasure of a train at their disposal – eschew the dining car seats and grab ones for a coach car, which looked infinitely more comfortable.

Still, other dining-car seats seemed far less tight than ours. I base this observation on the fact that, unlike my own kneecaps, the kneecaps of the other guys wearing Bermuda shorts weren’t turning blue by the time we got back to the station. So I guess you pay your money and take your chances. What you don’t take your chances on, however, are the Nickel Plate Express’ attendants, all of whom were females. These ladies, young and not-so-young, were uniformly kind, courteous and delightfully helpful.

This isn’t so on every train you ride.

I’m no big-time traveler, but long ago, Nancy and I happened to catch a train in Holland that sliced across a little bit of Belgium, then chugged into Germany. At the German border we were greeted by a blond-haired, blue-eyed youngster in an immaculate gray uniform with a holstered Walther P-38 pistol strapped to his side. This kid looked like Hollywood’s idea of a youthful, over-enthusiastic Nazi. Working his way slowly down the train aisle, he finally stopped beside Nancy und me – I mean, and me – studying us coldly as I shakily lit a Marlboro.

“Und vhere did you get zee American zzzigarette?” he demanded, snidely.

OK, I’m kidding about zat, er, that. What he asked was, “Do you haf anyzing to declare?” and for just a moment I was rattled. “God bless America!” came to mind, as did, “Ya gotta believe me! I didn’t do it!” But then I thought better of saying so.

“Um, nein?” I finally ventured, drawing upon one of the three words I’d retained from two years of my D-minus level high school German. The border guard just sneered and walked past.

The Nickel Plate Express ladies, none of whom appeared to be armed, were far more friendly as they cheerfully passed out coffee and doughnuts, your choice of custard-filled, jelly-filled or sprinkles. Oh sure, with every bite of custard dripping into my gut I could feel my seat get tighter. Still, I was enjoying the ride. But this trip wasn’t without drama, either, as I watched one of the ladies burst into action to head off a potential emergency. 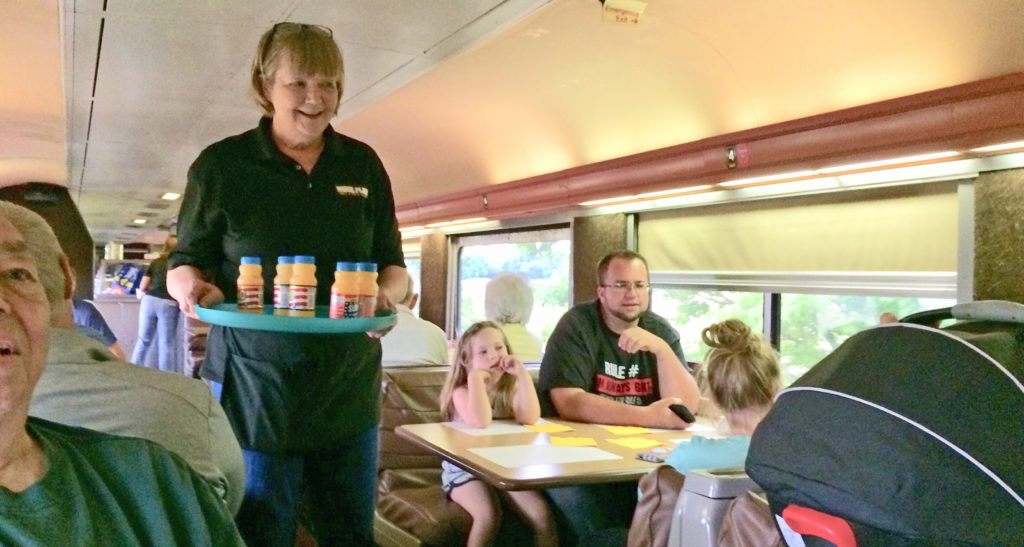 Attendants on the Nickel Plate Express work in the dining car. Photo by: Nancy Carlson

This being a Father’s Day weekend excursion, there were lots of Dads with innocent little kids on board, and our swaying train car was noisy from all the excited chatter. However, over it you could hear the repeating track of Jimmy Buffett tunes playing on the PA system, the controls for which were right behind my head.

So I’m sitting there watching the flat, soggy Indiana farmland creep past when “Cheeseburger in Paradise” comes on. That was fine. After some other Buffett songs, “Margaritaville” plays, and that was fine, too, other than making me thirsty for some tequila. But after some more Buffett songs played, Nancy and I heard some hauntingly familiar notes, then suddenly flashed each other our uh–oh looks. Turns out the song playing now was “Why Don’t We Get Drunk and Smooch.”

Except, as any Buffett fan knows, it’s not “Smooch.”

It’s another S-word. A word also used for a type of pointed metal fastener characterized by a “helical ridge,” whatever the heck that means.

Anyway, the offending word had already played once, though nobody seemed to have noticed. It was  about to play again, though, implanting who-knows-what kind of confusion in the minds of the unsuspecting youngsters happily eating their doughnuts while watching the moo-cows roll past. Suddenly, one of the young attendants came flying down the aisle with a panic-stricken look on her face, dove for the PA control panel behind my head and, just as Jimmy as about to croon “smooch” again, lowered the volume.

I think Nancy and I both admired the young lady’s spunk and pluck for doing that. We admired the whole thing except for our tight seats, actually. Were we doing it again, though, we’d go with friends. And while there are kid-friendly rides like the Superhero and Princess Express, we’d probably pick the Uncorked Express, the Ales & Rails Express, or the Sunrise Express brunch run. You can check out these and other offerings at nickelplateexpress.com.

Just make sure you get seats that fit. Either that, or go on a diet.