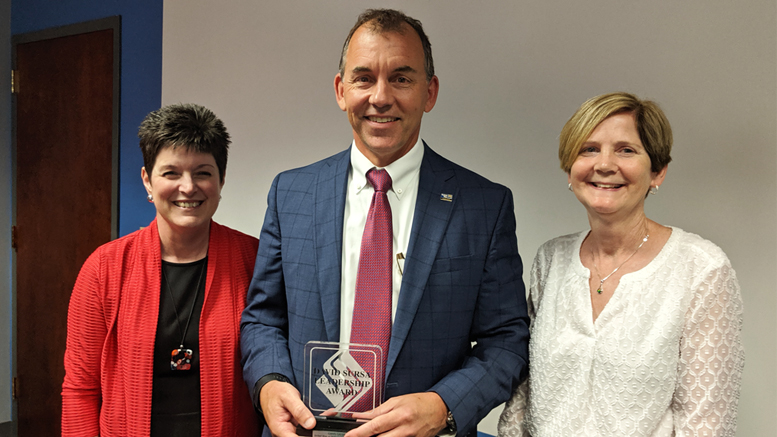 Muncie, IN – The Community Foundation of Muncie and Delaware County, Inc. has announced that Chris Caldwell has been awarded the 2019 David Sursa Leadership Award to recognize his dedicated service to United Way of Delaware and Henry Counties.

Caldwell was nominated by United Way of Delaware and Henry Counties, where he served on their Board of Directors since 2013. During his time on the Board, Chris has been involved with United Way at a very high level and has served on the executive, governance, resource development, community investment, and finance committees. Chris served as Campaign Chair in 2013 and has served as board chair and treasurer for the organization.

“Chris is the board member I can count on to ask the tough questions,” wrote nominator Jenni Marsh, president and CEO of United Way of Delaware and Henry Counties. She continued to cite an example of leading conversations with grantees to explore opportunities for collaboration and mergers to save on overhead expenses and expand impact. He brought that same critical thinking to the United Way Board of Directors which led to conversations and collaboration with neighboring United Ways.

“Chris fully embraces servant leadership and values it in others,” continued Marsh in her nomination. “He is quick to commend people for their work. His great leadership skills and style inspire people to deliver.”

In addition to his work in our community, Caldwell served on the United Way of Madison County’s board from 2003-2007 and acted as their Campaign Chair in 2006. Since 2017, Caldwell has represented United Way of Delaware and Henry Counties’ local interests at the state association of Indiana United Ways and currently serves on their board of directors as well as their oversight committee for UniFi Accounting and Gift Processing Services.

Caldwell was surprised with the award during United Way of Delaware and Henry Counties’ Board Meeting on June 17, 2019. Caldwell’s term on the Board ends this month.

The David Sursa Leadership Award was established in memory of the Foundation’s first leader. As Founding President, David Sursa blazed the trail for The Community Foundation.  His visionary leadership contributed significantly to the success of the Foundation and to the generous support it has provided to our community.  The annual program rewards, recognizes, and encourages extraordinary nonprofit leadership by a board member displaying the characteristics and commitment to community expressed by Mr. Sursa during his lifetime.