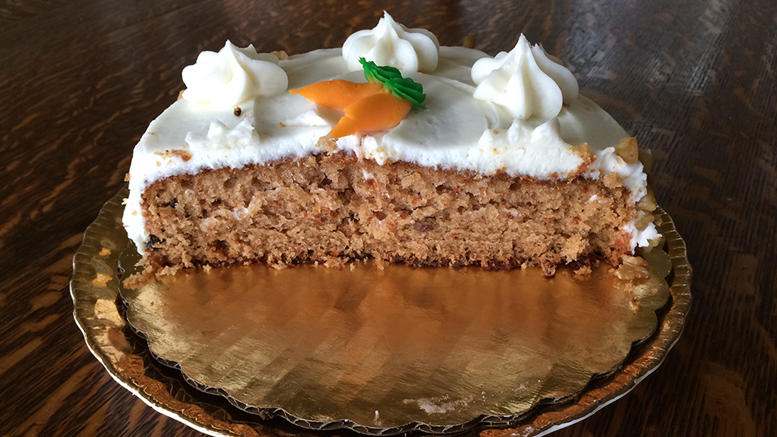 Does this stupid thing look good to you? Heck yeah! Photo by: Nancy Carlson

One quick glance at our kitchen counter and it became obvious: I was in deep doo-doo.

See, I was on a diet. It seems I am always on a diet. But sitting there under a clear plastic cover was two-thirds of a Concannon’s Bakery carrot cake. Nancy had bought the cake that morning to feed the literarily-fertile ladies of her female book club, Women Of Mystery Books, aka WOMB.

The point is, suddenly my diet seemed doomed, but allow me to backtrack just a bit. As a kid I was always chubby, but back then, who cared?  Did Davy Crockett care? Nope. Did Roy Rogers care? Nope. Did the Lone Ranger and Tonto care? Well, OK, the Lone  Ranger looked fastidious enough that maybe he cared.

It was only as I got older that I slimmed down. This was so, even if females didn’t actually think I was good looking, at least they wouldn’t take one glance at me, recoil in disgust and launch into uncontrollable fits of projectile vomiting.

But then, after Nancy and I married and our kids Katie and Johnny came along, I vowed to quit smoking cigarettes, which I burned through at the rate of about three packs per day. It took me yearsto succeed at this, but one magical day it finally happened. There was just one slight problem. From that moment on through the next nine years, you never saw me without a Concannon’s doughnut in each hand.

I mean, I’d eat two doughnuts at a time while painting a room, while carrying in the Christmas tree, while watering the garden. Being a newspaper reporter back then, I’d even type my stories with my index fingers poking through the holes in a pair of Concannon’s doughnuts. Plus I’d have a chocolate-covered crème-filled stick tucked behind my right ear, where I had once kept a spare Marlboro.

The result was about what you would expect. Before long, even my love handles had love handles.

With growing certainty, I feared I was going to be offered a starring role in some new reality TV show called “My 600-Pound Life,” which wasn’t even invented yet. That’s when I finally decided screw it, bit the proverbial bullet and eventually got back down to something at least within spitting distance of my recommended level on the height-weight charts. Even then, though, I prayed each night that reincarnation was true, and I’d die and return as one of those guys who could stuff food into himself all day long without gaining a single ounce of unsightly blubber.

Anyway, this month I was thinking it wouldn’t hurt to knock off a little beer-and-pizza flab, but that’s when I walked into the kitchen and spotted the delicious carrot cake – and I flat-out love me some carrot cake.

Naturally, this left me in a reflective mood, pondering the basic unfairness of life and haunted by the two-word question, “Why me?” And while we were on the subject, I wondered, why the heck should carrot cake be so fattening? It’s made out of carrots, for cripes sake! Same thing with zucchini bread! I’d rather be dragged kicking and screaming across The Rainbow Bridge than eat a freaking zucchini, but just stick it in a loaf of bread and I can’t stuff my face with it fast enough.

If somebody’s ever baked a green-bean cake, I bet it wasn’t fattening.  Ditto for, say, pea bread or rutabaga cake or a dessert named Turnip Delight.

But carrot cake? No, no, with that it’s, “Next stop, Porcine City!”

So that’s what I did, and damned if that sucker wasn’t moist as the day it was baked.