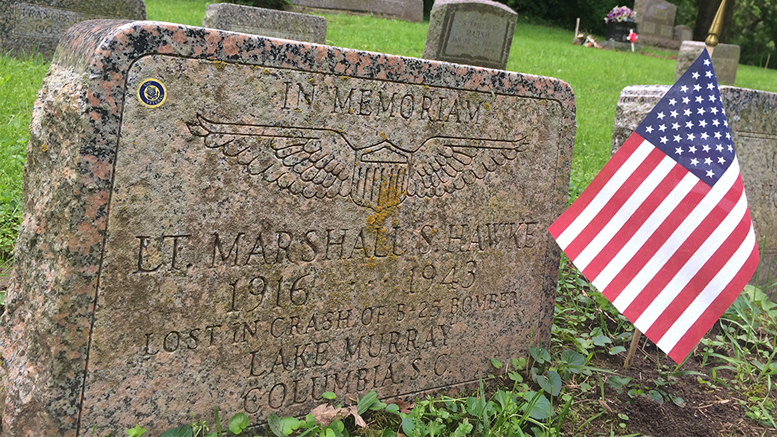 This flag in Beech Grove Cemetery decorates the grave of Lt. Marshall S. Hawke, a young Army flier killed in the crash of his B-25 back in 1943. Photo by: Nancy Carlson

As a lifelong civilian, I have been getting ready for my typical Memorial Day, 2019.

Taking advantage of Nancy’s week-long absence on a church mission trip down South, I selflessly – some might even suggest, heroically – tried out brand new grocery items at great personal risk to my fragile taste buds. This was all to discover which were best suited to making Memorial Day a culinary   triumph.

First to be confronted was the vexing issue of coleslaw. Picking up a plastic bag of Kroger cabbage fixings at Payless last week, I then grabbed a large spoon and, closely following instructions, stirred in a small bottle of Marzetti’s coleslaw dressing.  The result?  Coleslaw-wise, it kicked  butt.

Then there were the brats. In a disappointment-defying leap of gastronomic faith, I bought myself a trial six-pack of Johnsonville Flame Grilled Fully Cooked bratwursts, then threw them on the grill. Yeah, those babies will definitely work for Memorial Day, too.

Turning my attention to the question of holiday doughnuts, while scooting toward the brats section I snatched up a dozen Payless sour cream doughnuts and … ta–da… hit pay-dirt. This left me only chilling my beer and buying a cavalcade of Doritos, Fritos or any other snack chips whose name ends in “o” to be ready for Memorial Day.

Except, of course, for the one truly important thing…

That’s giving humble thanks for the countless young men and women who have died wearing American uniforms to make our country what it is, and our lives what they are.  Somehow it’s so easy to take for granted, this roll call of sacrifice that started in the Revolutionary War, continued through the Civil War, the World Wars and Korea, and is still being called in Iraq and Afghanistan today.

My first thoughts always turn to those lost in Vietnam. It’s not that I knew many who died. Never having served in the military, I didn’t. But I always think about Bo Cameron, the friendly blond kid who lived just up the street from me. He stepped on a mine. Now he’s a name etched into a black wall in Washington, D.C. There was a kid named Michael, too, whose last name escapes me. A good friend of my old buddy Tim Hales, he was a clean-cut, fine-looking youngster who joined the Marines right out of Elyria High School’s class of ’67. Back home before deploying as a radioman, he admitted to Tim he was scared witless. Radio men were prominent targets, he told him. I can still picture Tim’s jaw dropping just a few months later when he learned his friend’s greatest fear had come to pass. His is another name on that beautiful, heartrending wall.

While Memorial Day specifically honors those killed in war, it also further kindles my respect for those who fought and lived. I think of my buddy George Bennett. As a young Marine, he lost friends who died alongside him, especially in a horrific Vietnam battle at a place called Mutter’s Ridge. Then there’s my pal Bill Finney, whom I’ve sat across from over fried eggs many a Saturday morning. Barely past twenty then, he commanded a crew of four, piloting twin-engine Army electronic surveillance planes over the Ho Chi Minh Trail, monitoring troop movements. He also knew how it felt to be strapped into his cockpit, itching to take off, as mortar shells rained down on his airfield.

We owe everything to guys like Bo, Michael, George and Bill, plus endless thousands of others who have come and gone, before and since.

Still, being a Baby Boomer, I’m most familiar with those World War Two veterans of The Greatest Generation who raised us. As a little kid, I remember how proud I’d be at our annual church picnic when Dad tossed me around in the swimming pool. Three years spent as a Navy gunner, and the only direction he could reliably count on swimming was straight down. But there he was, an upstanding Baptist,  wrapping me in tattooed  arms. His right one was anchored at his shoulder by an ugly, crater-like wound where shrapnel from a kamikaze had nearly taken his life fifteen years before. Even our pastor, Rev. Woody McCaleb, was minus a little finger, it having been shot off in the Battle of the Bulge.

There also were a couple guys I met later in the newspaper business.

Roy Bigger was our old business editor. He’d been captured in the Battle of the Bulge.  Another very nice guy, he was a big one, too, at six-feet-plus. But in the POW camp he’d been on near-starvation rations.  We’d often grab lunch together at the old Davis Café. Thirty years after the war he’d sit sort of huddled over his food with his forearms around the plate, as if someone might try to take it from him.

But the guy who pointed this out to me was my friend, fellow newspaperman and a personal hero, Dick Stodghill. Dick fought his way across Europe in World War Two as an Army infantryman. Even more to the point, he was a brilliant writer of popular mystery tales, and told the story of his service in his book, “Normandy 1944: A Young Rifleman’s War.”

As fine a war memoir as you can read, it’s a book that’s full of life, but also death. There are dead GIs. Dead Germans. Dead farm animals, too, the innocent, uncomprehending beings whose wartime slaughter always weighed heavily on Dick’s mind, a mark of his humanity. Dick’s stories, whether written in a book, a newspaper column or shared between sips of grapefruit-juice-and vodka at Frosty Miller’s corner tavern, were unforgettable. Picture a field on which the American dead are sprawled, a field across which the GIs like Dick, just 18 at the time, know they are going to attack the dug-in Germans again. From the rear comes a faint sound, the wheezing, raspy notes from a pump organ being played by some hapless chaplain’s assistant. Then the GIs, about to charge past their dead buddies, recognize the tune. It’s “While on others thou art calling, do not pass me by…”

Can you imagine that?

Or consider Dick’s take on what seems a simple subject, the blanket rolls GIs wrapped their personal belongings in, then left behind before going into battle. Afterward they reclaimed them, of course, except for the ones who would never reclaim anything again.

“Then, as was always the case, the rolls remaining on the ground underwent a transformation,” Dick wrote. “They had been blanket rolls, now they were casualty rolls. With the new name came a new look, one that spoke of infinite loneliness, lost hope, shattered dreams. Someone had to open these pathetic reminders of lives that a short time before had been robust… In Normandy the unclaimed rolls more often than not outnumbered those that had been picked up. Sometimes the neat rows were hardly disturbed, just a gap here and another there…”

There is also his shock upon watching Graves Registration troops, aided by German POWS, checking dog tags before haphazardly tossing the decaying bodies of dead GIs into temporary graves. And there’s his stunned response to approaching a field where nineteen GIs are sleeping. “How do I join this outfit?” a weary, envious soldier asks. Then they look closer, and it turns out these sleeping GIs will never wake up, each having been stabbed by his own bayonet.

Such stories always bring troubling thoughts to my mind, particularly come Memorial Day. One is this: Anybody who hasn’t experienced war firsthand has no moral right to impose it on others, especially their own countrymen.

Another is how incomprehensible it is to see images of modern Americans rallying under banners emblazoned with swastikas and other Nazi regalia. Do none of those folks have fathers, grandfathers or even great-grandfathers who bled and died to defend our way of life? And if they do, what on earth must those old soldiers think of seeing their progeny bearing those swastikas now?

My friend Dick, who never tolerated fools gladly, has been dead five or six years now. Sometimes when I see such hateful images, I think maybe it’s good he’s gone. It’s definitely good he’s gone for the haters’ sake. Confronted by them, I quake to think what Dick’s reaction would’ve been, but I know it’d be damned memorable.

Finally, I’m reminded that those of us who haven’t fought for our country, or lost a beloved family member to war, have absolutely no  comprehension of the horror it entails, nor the priceless, unpayable debt we owe those who have.

If we did, every day would be Memorial Day.