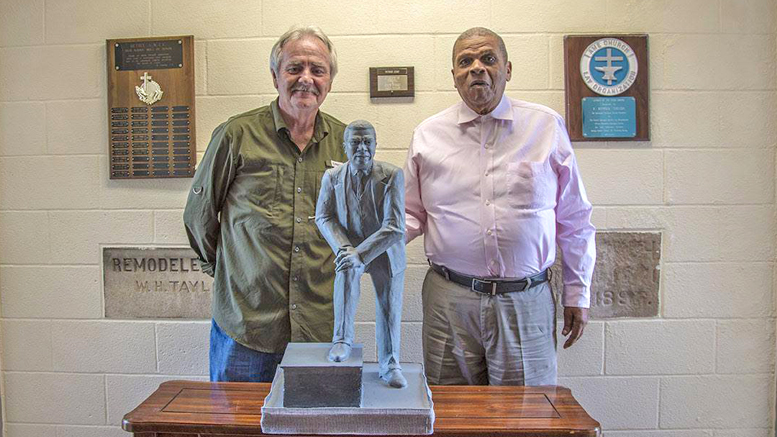 Hoosier artist, Bill Wolfe is pictured with Hurley C. Goodall and a miniature version of the lifesized statue. Photo provided

Muncie, IN — The Delaware County Historical Society, Community Enhancement Projects, and the Muncie Arts and Culture Council are pleased to announce the dedication of the Hurley C. Goodall statue at 6:00 PM on Thursday, May 23. The dedication will take place at Cornerstone Park and Fireman’s Park, at the corners of Madison and Jackson streets and Madison and Main streets. The event is free and all are invited to attend. May 23rd is also Mr. Goodall’s 92nd birthday.

The ceremony will include brief remarks from representatives of the Delaware County Historical Society, Community Enhancement Projects, Muncie Arts and Culture Council, the City of Muncie, and the Goodall family. The statue will be then be officially unveiled and dedicated by the Goodall family.

In fall of 2017, the Delaware County Historical Society began the effort to build a lifesize bronze statue of local Civil Rights leader, historian, and state representative, Hurley C. Goodall. A steering committee was formed to guide the process and the DCHS partnered with CEP and MACC to carry out the initiative.

The statue was designed by Hoosier artist, Bill Wolfe and cast at Sincerus Foundry in Indianapolis. Muncie’s Parks Department, S.A. Boyce Corp, Wilhoite Monuments, and Jay-Crew Landscaping prepared Fireman’s Park for the statue, under the guidance of Community Enhancement Projects. 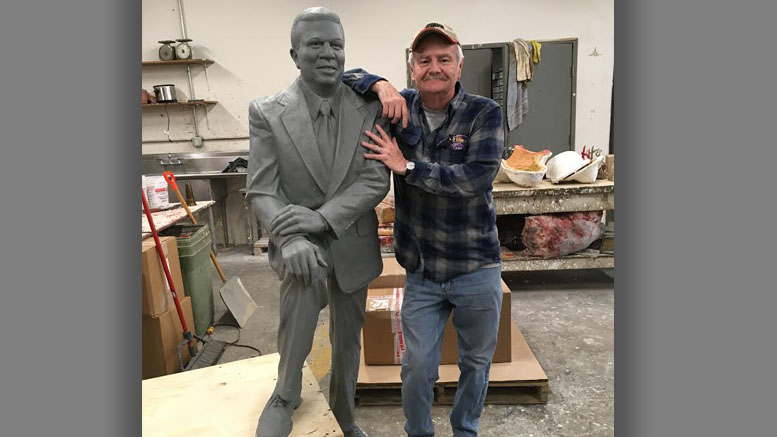 Hurley C. Goodall was born May 23, 1927 in Muncie. A graduate of Muncie Central High School, Goodall served a tour in the United States Army as part of the occupying force in Japan at the end of the Second World War. Upon returning home, he married Fredine and began work at Muncie Malleable Foundry. Goodall became active in Labor and Civil Rights at this time, becoming a leader of both in Muncie. In 1958 he was hired with John Blair as the first paid African American firefighters in Muncie. After retiring from the MFD in 1978, Goodall was elected as a Muncie representative in the Indiana General Assembly, a role in which he served until 1992. Upon retiring from elected office, Goodall began work at Ball State’s Center for Middletown Studies, compiling the history of Muncie and Delaware County’s African-Americans. Goodall served on numerous boards, including the Muncie Board of Education and is a lifelong member of the NAACP – Muncie Chapter.

Anyone wishing to contribute to the project can donate to the statue’s maintenance fund at http://delawarecountyhistory.org/.

For questions or comments, contact Delaware County Historical Society’s president, Chris Flook, at: caflook@bsu.edu. Guests are encouraged to follow the DCHS on Facebook for updates in case inclement weather requires a change of plans.