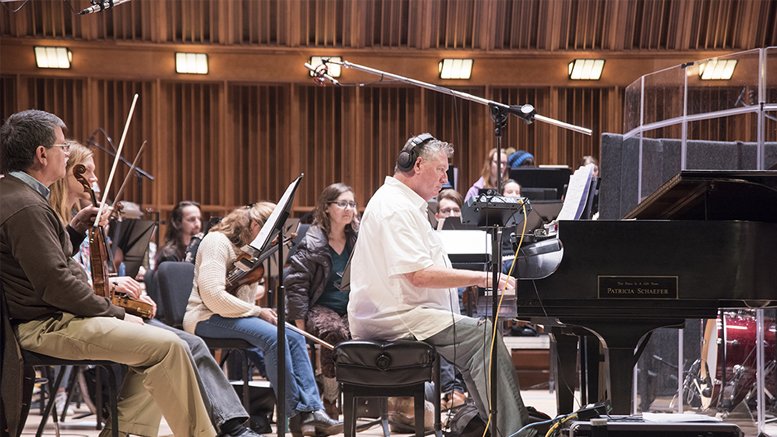 Muncie, IN— Emmy Award-winning musical director Michael Rafter will join Ball State University for Fall semester, bringing his talents to the Department of Theatre and Dance.

Rafter will be an associate professor of musical theatre, succeeding Beth Turcotte, the George and Frances Ball Distinguished Professor of Theatre who joined the University in 1982. She retired May 3.

Rafter is an American arranger, music director, music supervisor, conductor, and musician best known for his work on Broadway and collaborations with Tony Award winner Sutton Foster, who also is an instructor in the University’s Department of Theatre and Dance.

The addition of Rafter will add to the University’s already stellar national reputation for its theater and dance programs, said William Jenkins, department chair, who noted the musical director has been a regular visitor to campus as a guest instructor in recent years.

“It is an honor to bring Michael’s talent to campus,” he said. “Michael is truly a musical genius and our students will be able to learn from the breadth of experience. It is our goal to provide our students with awe-inspiring mentors, and Michael fits the bill.”

During his time as a guest instructor at Ball State, Rafter served for three years as the music director of the Senior Musical Theatre Capstone Cabaret, which performs each year in Indianapolis and in Joe’s Pub at the Public Theatre in New York City. He also was the musical director for the department’s production of “Damn Yankees” in Fall 2017.

In 1994, Rafter was awarded the Emmy Award for Outstanding Individual Achievement in Music Direction in the television adaption of the stage musical “Gypsy.”

He also worked on numerous Broadway shows including “Swing!,” “Violet,” “Thoroughly Modern Millie,” and revivals of “Sweet Charity,” “The King and I,” and “The Sound of Music,” among others.

Rafter is a 1982 graduate of Dartmouth College.