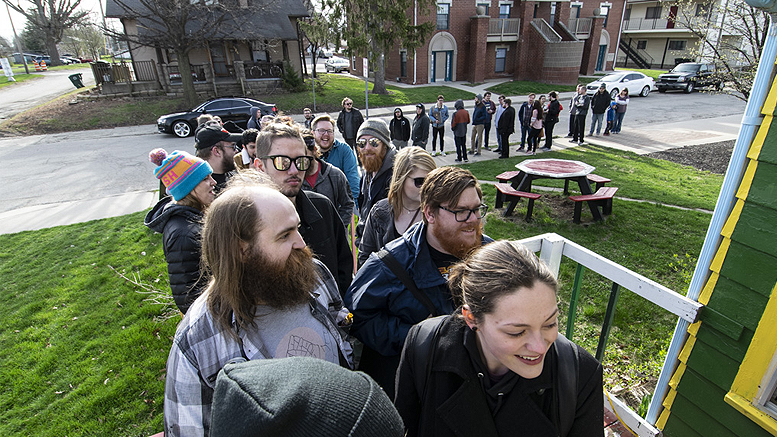 The line outside Village Green Records at 9am Saturday. Photo by: Mike Rhodes

LP’s?
45’s?
Needles and cartridges?
Record cleaning fluid?
Discwasher? (Manufactured by RCA in Indianapolis back in the day.)

Well, all that old technology is now very popular these days. Even with millennials, who grew up listening to mostly compressed digital music files on iTunes and other digital music services. According to Forbes, analog-recorded vinyl record sales are through the roof. In fact, the format has seen 260% growth since 2009.

Over $30 million of vinyl records were sold in 2017 alone. And sales are expected to continue to increase, even as big box stores such as Best Buy stop stocking CD’s—a much newer format—in their stores. Major audio equipment manufacturers even released a number of NEW turntable models at the Consumer Electronics Show this year. Technics, Rega, NAD, Audio Technica, Sony, U-Turn, Pioneer, and many others released new models for the budget, mid-range, and high-end audio markets.

So, Record Store Day is a day to celebrate our audio history—the vinyl record.

Travis Harvey is the owner of Village Green Records in the village. “This is our 12th Record Store Day,” he said. “We’ve been participating in it since the very first one. I started ordering product for this year’s Record Store Day about two months ago. We expect about 300-400 people to visit the store today.”

Jeff Brown from Albany was one of the first people to wait in line at Village Green Records. He and a number of other customers were waiting outside the store at 6:30 in the morning—about three hours before the store opened. “I have about 1,300 records in my collection and just love the warm sound of vinyl,” he said. “That’s all I really listen to.” 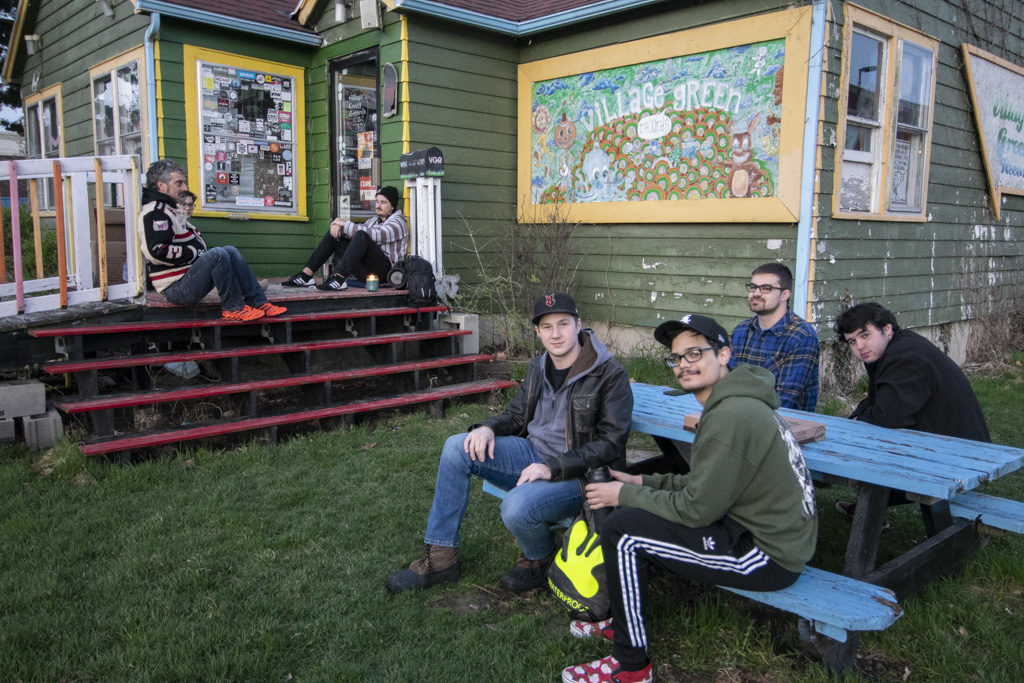 This group of customers arrived early for Record Store Day. They were photographed at 6:30am, about three hours before the store opened. Photo by: Mike Rhodes

The first LP record specification was created in 1948 by Columbia.  How can an audio medium that’s over seventy years old be so popular now? In 2019, we’ve got high-definition radio, ultra-hi-fi digital downloads, online digital music streaming, and so many others.  How can the “lowly” extended play vinyl LP be so popular in 2019?

I had to find out for myself.

As a bonafide audiophile, I had repeatedly heard that vinyl records had a reputation for sounding “superior” in terms of sound quality.  So a few months ago, I went to Village Green Records for the very first time. Travis pointed me to a used Technics SL-220 turntable in good condition he had for sale, so I bought it, along with a copy of Pink Floyd’s 180 gram vinyl release of the iconic Dark Side of the Moon. (The very first track on the album, Speak To Me, has a low frequency heartbeat at the beginning of the track and can really blow your house up if a subwoofer is used.)

After selecting a quality phono preamp, and a new Ortofon cartridge, I hooked everything up to my home stereo, put the record on the turntable, and dropped the needle. 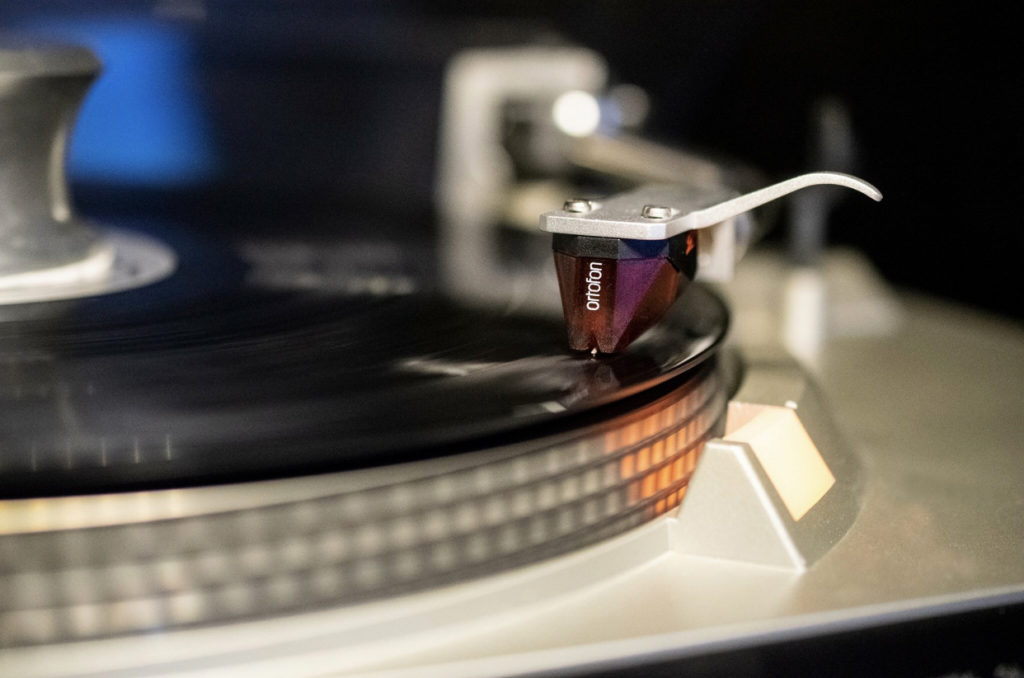 It sounded awesome! Especially with a subwoofer included as part of the sound chain. When Dark Side of the Moon was initially released, subwoofers were not part of a typical home stereo system.

I had not heard a vinyl record since my Warren Central high school days, while working at Camelot Music at Washington Square Mall in Indianapolis. (The coolest job for a high school student, ever, I have to admit.)

When I worked there, employees were given the opportunity to take FREE records home at the end of every month. Record companies would send the store “cut-outs” of their new LP releases, hoping the store would play them—and customers would buy the LP’s of what they heard playing inside the store. At the end of the month, store employees could take those “cut-outs” home. After a few years, I had literally collected thousands of FREE LP records from working at Camelot Music. What a cool perk!

Then CD’s came along, and I gave away or sold my entire record collection. Major mistake, but many other music collectors did the same thing. 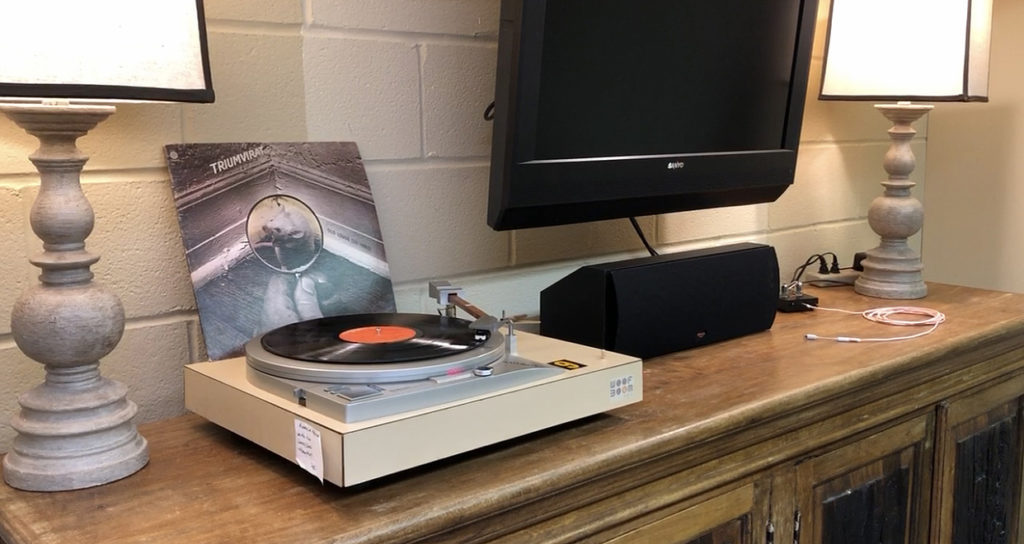 The Technics SP-25 turntable, running a Shure M104 cartridge inside the conference room at Woof Boom Radio on 29th Street.  The turntable is hooked up to a Little Bear tube preamplifier which then runs to a vintage Pioneer receiver and Kipsch floor-standing speakers and subwoofer. Photo by: Mike Rhodes

In the last few months, even Woof Boom Radio (where I work)  brought some of their old vintage record playing equipment out of storage, cleaned it up, and placed it on display.

According to Sean Mattingly, chief engineer for Woof Boom Radio, “The turntable pictured above is a Technics Quartz Direct Drive Turntable Model SP-25 which was used up until the late 1980’s by the production director to dub popular vinyl record songs to tape cartridges for on-air play.  The tape “carts” were an easy way for DJ’s to play the same songs over and over without wearing out the records.”

Woof Boom’s turntable pictured above is outfitted with a vintage wooden Micro-Trak tonearm.  This workhorse, a standard of radio station operations, was recently rescued by Mike Rhodes and chief engineer Sean Mattingly, who set it up in the Woof Boom headquarters conference room.  Now the radio station staff uses it to play an occasional 1970’s LP and enjoy the simple, but great sounding technology of the past.”

How Records Are Manufactured. The Amazing Process.

There’s a great deal of discussion in online forums as to whether or not vinyl records actually sound better than digital music. It can be a controversial topic—and a very personal one. If you DO listen to records, you have to actually take time to LISTEN to the music, as you have to get up and turn the record over every 20 minutes or so.

And, at my age, that gets old pretty fast.

Some people feel the activity of physically “touching and handling” the music source brings them closer to the enjoyment of listening to music.

It can be a bit of work to start listening to records again, but for many people, it is a rewarding experience and can be a lifelong hobby.