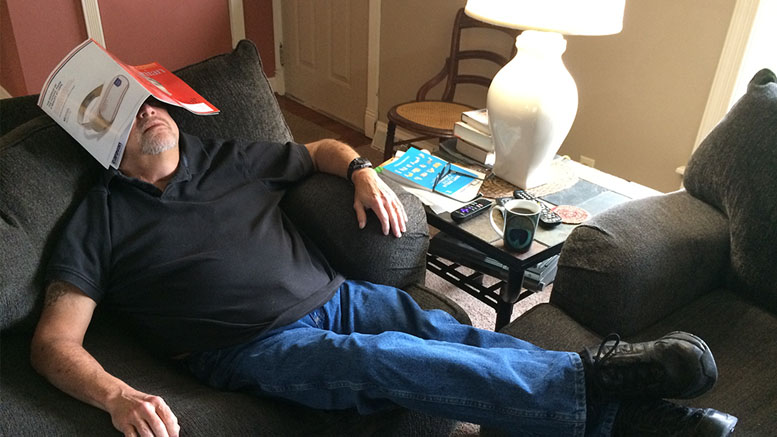 Napping on the love seat is a lot easier than it looks. Photo by: Nancy Carlson

In my younger years, I was never much of a napper.

As far back as kindergarten, I have vague memories of being in class as our matronly teacher, Miss Alexander, passed out our milk cartons and graham crackers, and I’d think, “Yo! Sweet, toots!” Well, way back then I probably didn’t actually think of Miss Alexander as “toots.” Probably I thought  something more like, “Ooh, goody gumdrops!”

But as enthusiastic as I was about milk-and-cracker time, I was unenthusiastic about nap time, which ensued shortly after our snack break. But why wouldn’t I be? I was a little kid. Little kids hate naps. Maybe I’d just be getting the hang of cutting with scissors, reciting my ABCs or mastering my colors when whammo! It was lights out for twenty minutes. After waking up, I would have to start mastering scissors all over again. It would be another eight or nine years before most of us goofy little kindergarten guys began to understand that napping with girls could be pretty entertaining.

Furthermore, we were napping on the classroom floor with nothing to lie on but some cruddy little mats. I’m pretty certain that even back in biblical times, kindergarteners napped on a nice goat pelt or two.

Anyway, I got to thinking about this recently.

As an old retired guy now, my day has a whole different set of highlights than it did during my thirty-nine years in the newspaper business. Back then I’d get giddy seeing the lunchroom vending machine being restocked with Snickers bars, or become weak-kneed with delight over using some exciting new adverb.

But now?  My daily highlights seem far superior. They include that first cup of coffee after springing from bed at the crack of eleven o’clock every morning. That bourbon-on-the-rocks at night, over which to ponder the fact that tomorrow, for the one-thousand-five-hundred-and-thirty-third day in a row, I’m not going to work again. In between those major highlights come mini-highlights, like stealing Nancy’s bacon while her attention is diverted frying eggs. Pondering the mysteries of life with my closest personal advisers, both of whom are dogs. Intercepting the mailman to learn that instead of any bills today, he’s delivering me a bunch of Big Mac discount coupons.

But one daily highlight stands above all others: Nap-time.

Now I love nap-time, though by rights, I should probably be less enthused about it than I am. It’s not like I have some fancy bed with a bunch of comfort settings, or a groovy hammock strung between two trees. What I’ve got is a love seat upon which to rest my torso, set at a ninety-degree angle to our couch, where I rest the fleshy yet bony stubs known as my legs. After untold hours spent sprawled like this over the past four years, my butt imprint in the cushion is as unique as my fingerprint. More to the point, I have become a skilled napper! Gimme thirty seconds and it’s “Bedtime for Bonzo,” with a deep unconsciousness the arrival of an F5 tornado couldn’t penetrate. And I’m a dedicated napper, too, never missing my daily afternoon snore-session.

Part of my newfound love of napping spurs feelings of guilt, though.

The truth is, I could be doing so much more with my life. It’s not like I’d rather take up bungee-jumping or hiking the Appalachian Trail. But the fact is, to put it colloquially, I ain’t gettin’ any younger. By the most optimistic of reckonings, I’ll be taking The Big Snooze way too soon for my liking. Therefore, shouldn’t I also be taking advantage of every minute to do good in the world? Working to feed the hungry? Sowing the seeds of peace and justice? Living a selfless life of servitude that stands as a shining beacon of hope to the less fortunate, kind of like Mother Teresa in trousers?

It always makes me think back to a solemn conversation I had with my Dad the day my final eighth-grade report card arrived. It was a Saturday, and I had just returned from a Cleveland Indians baseball game with my buddy Dave Jewel, who had received free tickets for his outstanding scholastic achievements. Let’s just say, I had not received any free Indians tickets for my outstanding scholastic achievements. As I walked into the house, Dad – who was a very, very smart guy – was studying my grades with a hollow look of utter despair and resignation.

“Son,” he sadly told me. “It looks like you are going to spend your life digging ditches … but I want you to be the best ditch-digger you can possibly be.”

But right then and there, I had an epiphany. As a way to earn a living, ditch-digging suddenly sounded way too sweaty. The following school year, as if by magic, my grades rocketed nearly all the way up to average. Well, except for geometry, which I still flunked.

Anyway, I guess what I’m saying is, yeah, I’m a napper. But from here on out, I’m committed to being the best napper I can possibly be. As for Dad, I’m pretty sure he would be proud.

Steve Lindell interviews John about his article on 4/26/19. Listen below.