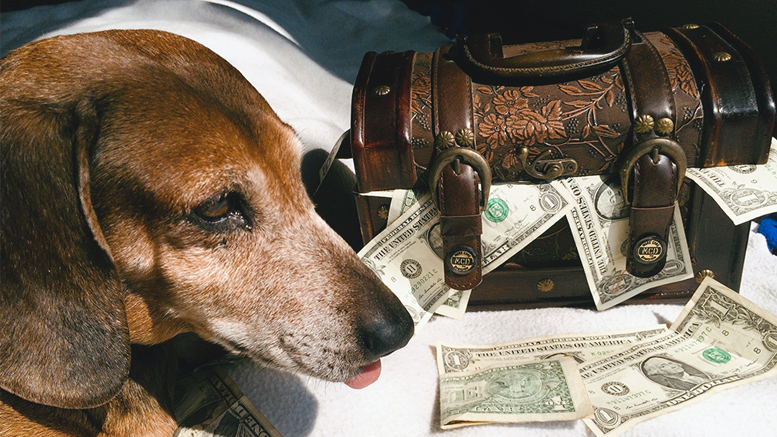 In his daydream, Toby Carlson revels in riches. Photo by: Nancy Carlson

“But what would our dogs do with one-hundred-fifty million pounds?” asked Nancy, who is the practical thinker in our family.

First, being true-blue American dogs, Jersey and Toby would exchange the pounds for dollars, I patiently explained. But given the current exchange rate, Nancy argued, this would likely slash their inheritance to a measly one-hundred-forty million bucks or so. Yeah, I countered, but it’d still buy them a heap of Dog Yummies. After that, our dogs being about a million times richer than we are, they would undoubtedly start throwing their fiscal weight around the  house.

Payback, as they say, is hell. Being the new financial heads of our household, the dogs would probably get their jollies making me pose for endless photographs dressed in ridiculously cheesy outfits. You know, like those big hot dog buns with fake mustard squirts sewn on them.

On the other hand … say they were sitting in what used to be my favorite recliner, each with a hundred-dollar bill clenched between his or her teeth. I’d probably come bounding across the carpet on all fours, drooling and grinning and spinning around. Then they’d pat me on the head and, speaking dog, say, “Awww, whose da good widdle human?” before dropping the bills at my feet. Then I’d snatch up the money and run away to hide it while they ambled off and pooped on my newspaper.

Toby and Jersey would probably take me for walks, too.

Being mostly an indoor human, though, I’d be out there straining against my leash to get back inside the house so my old neighbors wouldn’t see the sorry state to which I’d fallen. But being rich dogs now, Toby and Jersey would ignore me, leisurely stopping at every bush and fire hydrant to sniff out which of their dog  buddies had left a pee greeting for them. “Come o-n-n-n-n-n,” I’d start whining after a minute. But then they’d pull out another nice crisp hundred-dollar bill and I’d flop on my back and begin rolling around in the dirt, acting all adorable and stuff and thinking OK, for another hundred bucks, sniff to your heart’s content.

Dinner time? Yeah, they’d be sitting at the table with classy goblets of water, wolfing down cans of Fancy Feast Classic dog food. Meanwhile, I’d be under the table, bouncing between Toby and Jersey with unbounded excitement. Finally they’d yank a Tupperware container full of week-old Tuna Helper from the fridge, spoon some onto a paper plate and slip me another hundred! Then I’d suck up that slop like a Wet-Vac and pretend I wanted some more.

So as a human belonging to rich dogs, I would live a pretty sweet life. At least until the day I catch them whispering conspiratorially and studying me with weird, pitying looks on their faces.  Suddenly I would get suspicious, wondering what the heck is up? Are they tired of me? Do they no longer love me? Then they would leash me again and begin leading me out to the car. But sensing that something terrible was afoot, I would  begin whimpering frantically, pulling them back toward the house and the desk where all my old medical records are kept.

“Come on, boy,” they’d lie in comforting dog-speak, pausing to scratch me behind my ears. “Don’t be afraid, buddy. It’ll be all right.”

Then the awful truth would truly dawn on me.

In a flash I would go ape, frantically pointing toward the appropriate desk drawer. “For cryin’ out loud, guys, look in there!!!” I would screech in human-talk, knowing they didn’t  have a clue as to what I was saying. “As God is my witness, I had a vasectomy back in 1987!!!”

But it would all be for naught.  Soon I would be at the vet’s office, where the doc would shave me around the old jingle bells while preparing to “fix” what I didn’t consider broken. Ten minutes later, with the ether mask strapped tightly to my muzzle – I mean, face – my last thought before going under would be, “This is a real pisser.”

Next thing I know, I would be groggy but awake, and “fixed” again.

Later on while navigating the Dairy Queen drive-thru, as befits wealthy dogs, Toby and Jersey would  toss a hundred-dollar tip through the access window. Grateful DQ staffers, in turn, would pass out two fragrant chicken fingers-and-fries meals and a couple extra-large Peanut Butter Cookie Dough Smash Blizzards for them. Like they had earned it, right?

Plus there would be a little something for me.

But not another hundred-dollar bill. No, no. Rather, I’d be resting in the back seat, feeling really sore and tender down south, if you get my drift, and thinking, “Ooh, goody! A frickin’ puppy cup.”