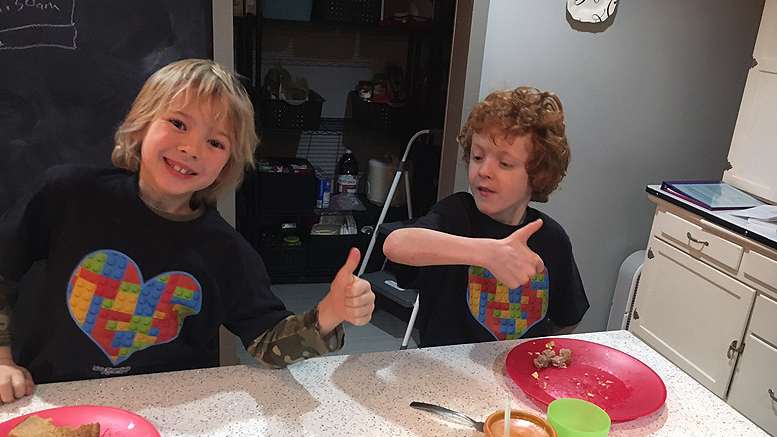 Muncie, IN—When the Interlock Autism Awareness Fest is held Saturday, April 27 at the Delaware County Fairgrounds, you can bet Cynthia Hunter will be there.

This is not just just because she is on the board of Interlock of East Central Indiana.

It’s because she and her husband, Stephen, are the parents of 11-year-old Aaron, a child with autism.  Over these past eleven years, they have learned just how vital the benefits of such an event can be in giving their older son every opportunity for maximizing his life potential.

Early in their autism journey, the challenge could seem overwhelming.

“You don’t really know where to turn,” said Cynthia, who works as an architect for Pridemark Construction. The information available at the Autism Awareness Fest can be overwhelming, too, but in a good way. “It’s really a great way to learn about all the information sources that you might need that are available in our community.”

The event kicks off at 8:30 a.m. with the 5K walk/run Race for Autism. From 10 a.m. to 2 p.m. is the resource fair, games, bounce houses, a free lunch and the Autism Acceptance Walk at noon. While the event is free, advanced registration is encouraged at https://www.memberplanet.com/events/interlock/autismfest2019.

The aforementioned wealth of information, offered by 30 to 35 vendors and booths, runs the gamut from helpful toys and devices for those facing autism to sources of respite for their caregivers. While Cynthia noted she and Stephen, a longtime Ontario Systems employee who also owns and runs Honey Rock  Farms, have a wealth of family assistance, others don’t. Respite, Cynthia explained, gives parents a chance to “go have dinner like a normal person, or go watch a movie.”

This event and Interlock aim to alleviate a serious issue for parents and other caregivers.

“It’s a feeling of isolation,” said Tom Donovan, who is with Bridges of Indiana, as well as Interlock’s board president. “It’s the feeling that they’re in this by themselves. It’s important for families to participate. This helps families come together and, through camaraderie, find avenues of support.”

Is autism on the rise? It certainly seems so, but maybe, maybe not. Figures from the Centers for Disease Control report one case of Autism Spectrum Disorder in every 59 births. What’s indisputable is that society is far more aware of it.

“Part of it is, I think it’s more readily diagnosed,” Donovan said, adding it’s all over social media. “Now we have television shows with people with autism on them. … People are more likely to go to the doctor and say ‘I want my kid tested for that.’”

For Cynthia and Stephen Hunter, that’s exactly what happened.

“What we found, Aaron wasn’t reaching those milestones that kids, babies and infants are supposed to meet during development,” she said. “It just took him longer to do everything. It was always just extremely slow progress. You hear the doctor say, ‘Oh, he’s not walking yet? Oh, he’s not talking yet?’ and you kind of get freaked out. Then they start doing some evaluations. That’s when you really start to get into the nitty-gritty of it.”

In other autism cases, she said, a child may seem to be making normal progress. “And then one day it’s like they turned a switch off.”

With a child’s diagnosis of autism, a parent’s life undergoes a drastic change. If a parent wasn’t patient before, she added, they had better get that way. “If you could buy patience at a store,” she said, “I’d be stocking up.” 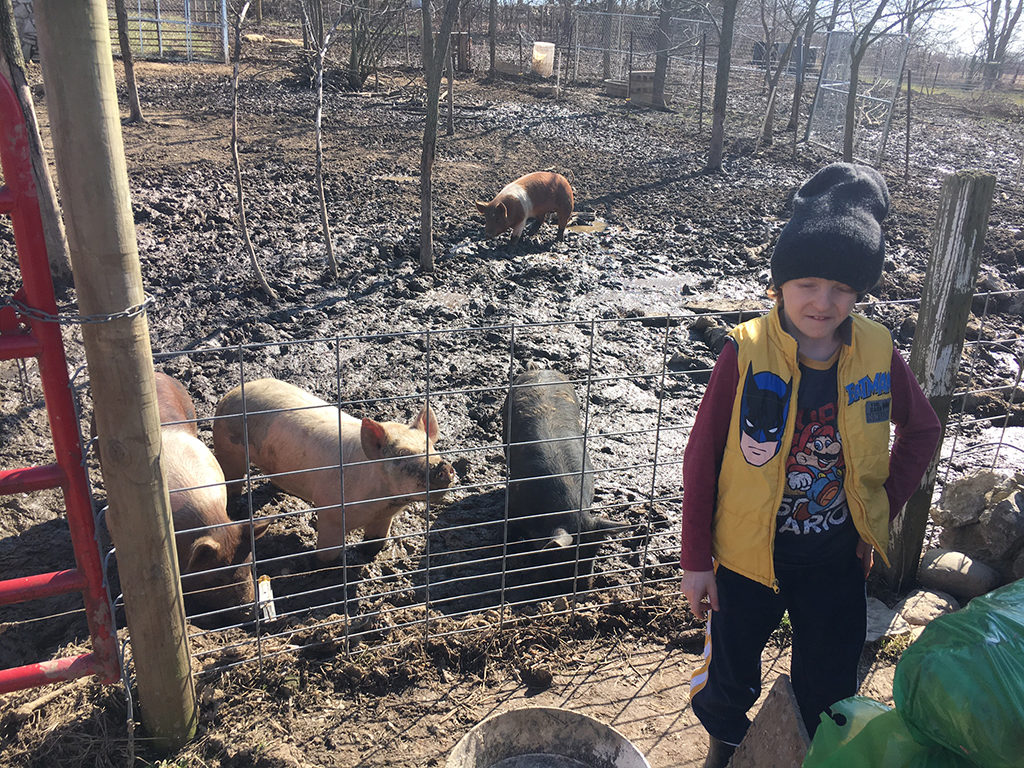 Aaron Hunter out in his happy place, the barnyard. Photo provided

As for schooling, Aaron, a tousle-haired redhead, goes to the ABA (Applied Behavioral Analysis) Clinic Engaging Minds. Therapy there is aimed at providing social interaction, plus physical, musical and speech development. There’s recreational therapy, too, which Cynthia said is fun.

With all such therapy, she unapologetically relies on professional help to raise Aaron. “There’s so much science behind it,” she said.

But meeting other parents of children with autism of all ages through Interlock is equally valuable. “Hearing those parents’ stories are super important and make me not feel alone, and like, I can do this,” Cynthia said. “Until you’re part of that little club, the autism club, you just don’t realize how important that ‘village’ is.”

And here’s another big help: The Hunters’ eight-year-old son Zachary, a student at Selma Elementary School.

“He’s been Aaron’s best therapist,” Cynthia said, proudly, noting Aaron had a feeding tube between the ages of two and four. Then Zachary was born. Once he began eating table food, his older brother was finished  with the tube. “Aaron did not need that thing anymore. He’d seen Mom and Dad eat for four years, but it was having that tiny person showing him. Same thing, Zachary walking, Zachary playing with blocks. That parallel play and that friendship is just so important. It’s so amazing to watch.”

“Maybe Aaron will never drive,” she acknowledges. “He might need assistance. But I hope he has a job. … Every kid has their thing that makes them light up. Aaron loves animals. Aaron’s has always been going fishing, or feeding the pigs, or digging for worms, or playing with the dogs. And he loves to watch birds with his grandfather.”

Could working as a veterinary tech, she wonders, be in his future?

One thing is for sure: Aaron is making progress.  “For us, any kind of progress is good,” Cynthia said. “Not every day is great. Most of them aren’t. But when you have a good one, you remember it.”