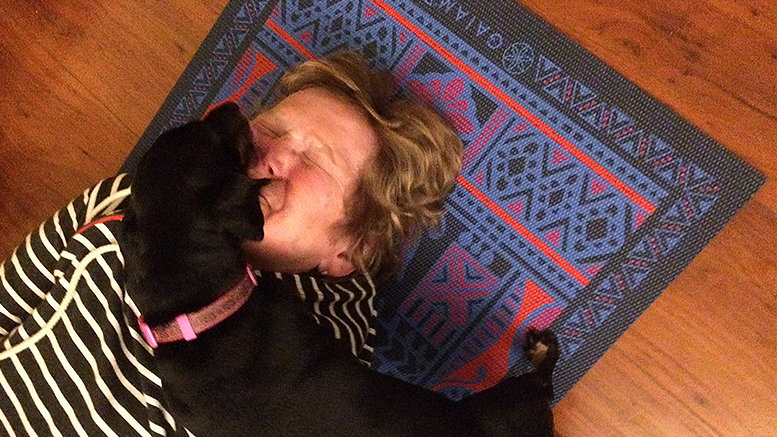 Practicing yoga with small dogs is a good idea – NOT!!! Photo by: John Carlson

After two hundred hours of training, our daughter Katie recently earned her certification as a professional yoga instructor. She’s been the Public Information Officer with the Marion County Sheriff’s Department for a number of years. While she’s already teaching, her goals now include offering stress-relieving yoga sessions to deputies and other first-responders who, trust me, can undoubtedly use them.

Another relative named Nancy has been practicing yoga at least twice a week, and occasionally seven days a week, for a number of years. She credits this, in part, with her happy state of mind and positive life attitude. Same goes for the fact she can work like someone half her age, not to mention run circles around the slug to whom she is married.

As for the slug to whom she is married – me – I don’t actually practice any yoga exercises except the Corpse Pose, which involves lying flat on your back and not moving a muscle. I am great at the Corpse Pose. Sometimes, I have been known to practice the Corpse Pose as long as 13 or 14 hours a day.  But I do faithfully meet Nancy at The Guardian Brewing Co., 514 E. Jackson St., most Saturdays about noon. It is then when she and others are just finishing up the most fetchingly named yoga class I have ever encountered, that being “Yoga Before Beer, Never Fear.”

Anyway, I’ve got two vital, vigorous buddies in the Guardian yoga class, John Pinckney and John Mickle, both of whom love it. One day, even our friend John Scholl showed up at class. For the record, none of them is some kind of butterfly-hugging weirdo, or at least not any more of a butterfly-hugging weirdo than I admittedly am.

The lesson in this? Normal guys can, and do, practice yoga.

It’s like we were saying that day after class while slurping our frothy brews.  “You know, John, yoga seems like pretty sensible stuff,” John declared. “Oh, it is, John!” answered John. “What do you think, John?” John paused for a moment’s quiet reflection. “I’d have to say you’re absolutely right, John,” John agreed. “You have anything to add, John?”

Whereupon I said, “Can somebody point me toward the john?”

OK, just kidding. But back to yoga…

While I don’t do yoga, I have been around it enough to learn one thing. Never practice yoga with small, jumpy dogs. As you can see in the picture of Nancy above, when you’re helplessly sprawled on a yoga mat, small dogs tend to mistake your face for a trampoline. Given the level of mind-control that yoga helps hone, there may be yoga masters practicing who can tune out dogs bouncing between their foreheads and chins while doing, say, the Double Pigeon Pose.

I seriously doubt that you can, though.

Other than that, from what I have seen, I would say practicing yoga is a very cool, very good, very beneficial activity to make a permanent part of your life.

There are assorted fine yoga studios around Muncie. They include the one at Guardian ably taught by Lisa Marie Dunaway, when she’s not busy being an Assistant Lecturer of Urban Planning at Ball State University. You can practice yoga in the 10:45 a.m. Saturday class at Guardian (but be on time, because it’s nevercool to show up late for a yoga class) for $10, or buy a five-session pass for $45. While the class is taught in proximity to the brewery’s beautifully gleaming brewing tanks, it’s in a softly-lit area amidst peaceful music.

Why she teaches is simple.

“I’m very interested in making yoga accessible to as many people as possible because I’ve experienced so many benefits from it personally,” she explained, citing improved agility and reduced anxiety as “universal” results. “I want others to have that same positive experience.”

OK, so it’s hard to beat that. Granted, I generally stumble through life way too confused to be anxious about anything. But I could certainly stand some improved agility, my present agility level approximating that of a rock. Factor in the beer, and the only thing I can say is the ancient Sanskrit word that sums up yoga’s loving nature and spirit.