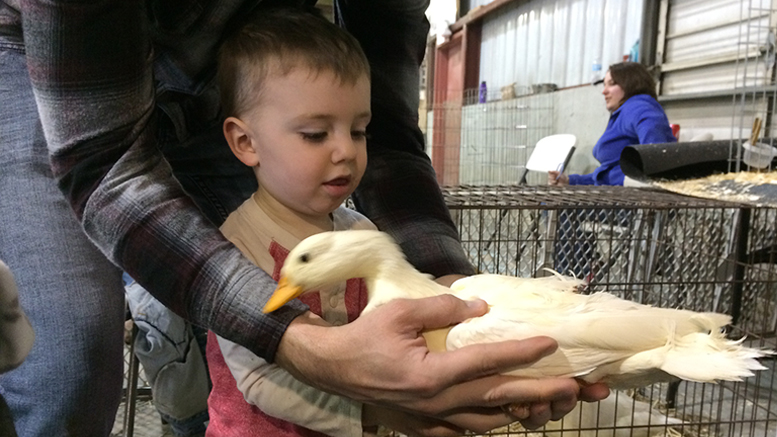 A youngster attending the farm festival meets a duck. Photo by: Nancy Carlson

Last week, Nancy and I went to the Delaware County Farm Festival. It’s an annual, two-day event that is near and dear to our hearts, because we actually met at the farm festival back 1880.

No, wait. I mean 1980. Itjustseems  like a hundred-and-thirty-nine years ago.

I’m not going to tell you this year we had to fight countless numbers of fanatical farm festival fans to get in, because we didn’t. Still, for a city slicker born-and-raised, I always find it enjoyable. As for Nancy, who was brought up on her parents’ hog farm in Illinois, it’s an event that takes her back to her happy place, figuratively and otherwise. As she explains it, the only thing in this whole wide world that makes her feel as good as going to the Delaware County Farm Festival is shopping at Rural King, where she can interact with the store’s wandering rooster.

That pretty much marks her as a farm gal, I’d say.

As soon as we stepped into Heartland Hall at the Delaware County Fairgrounds, my eyes lit up with anticipation. Was it because I spotted some exciting new fertilizer? No, it was not.  It was because in exchange for just seven bucks, women of the Extension Homemakers were handing over Styrofoam plates piled high with green beans, creamy coleslaw, mashed potatoes topped with killer gravy, plus tasty cuts of the tenderest baked steak I’ve ever eaten. What’s more, nearby was an enticingly stocked dessert table.

So that’s one important thing to keep in mind about the Delaware County Farm Festival next year, if you’re wondering whether to go. Those friendly ladies working in the kitchen to raise scholarship funds  are nothing less than God’s home-cookin’ experts. If you were somehow still hungry by suppertime, the guys of the Delaware County Pork Producers were grilling pork chops, too.

After lunch, Nancy and I visited the Memorial and Community buildings. In the course of our perambulations, we and others had some one-on-one encounters that non-farm folks seldom get to enjoy.

By that, I mean with animals.

There was Angel, an Arabian quarter-horse, and her stall mate Domino, a Tennessee Walker. Both beasts were downright beautiful, I must confess, even though painful experience has shown me that the vast majority of horses hate my guts. Should these horses have needed re-shod, farrier Phillip Hatton was a mere pebble’s flick away, heating horseshoes to a glowing red-hot in a blacksmith’s portable horseshoe, um,  heater-upper. Then he’d demonstrate the hammering techniques that farriers like him have practiced over the centuries.

As I watched Hatton, Nancy strolled about shooting pictures of farm critters and the kids who are so enthralled with them. As one sweet little girl exclaimed wondrously upon entering the Community Building ahead of us, “Here’s where we get to pet the animals!”

There were turkeys with wattles, and goats with thick, curved horns. One little boy was tickled with the chance to milk a cow. Another cute kid enjoyed a friendly encounter with a very laid-back duck. I mean, this duck could have been a professional “comfort duck” for nervous airline passengers, it was so mellow. And if the animals on exhibit didn’t catch your fancy, you could marvel at a towering, folded up sprayer way bigger than a mobile home, with tires that must have stood seven-feet tall.

For me the most impressive sight of all, though, was the sheep shearing demonstration.

One thing was obvious from the get-go. Since I was a kid, sheep have apparently been eating their Wheaties. I thought sheep were the size of hefty dogs, but the two there looked almost big as cows. One of them was strolling around in a pen, appearing slightly confused to suddenly find itself shaved naked as a jaybird. Just outside the pen, it was his buddy’s turn to be sheared by Will Herr of Hagerstown. Back legs splayed and a look on his face that seemed to ask, “Uh, what the heck is this crap?” the sheep was being expertly uncoated with some major-league electric clippers. 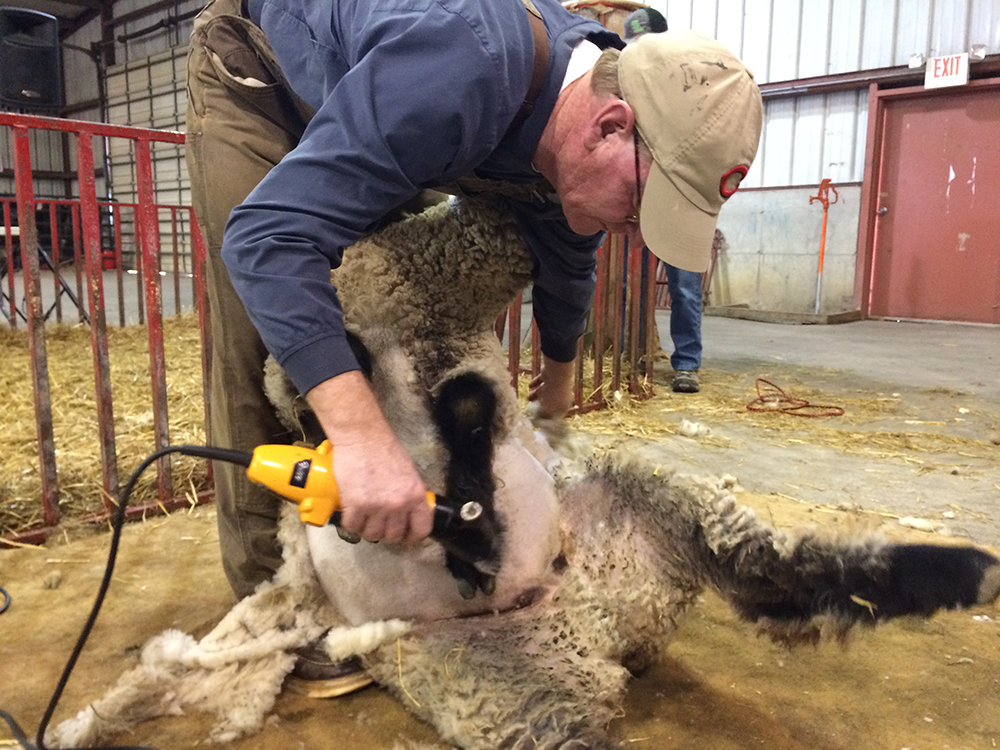 Will Herr shears a sheep at the Delaware County Farm Festival. Photo by: Nancy Carlson

As he worked, Herr looked fit enough to play linebacker for the Indianapolis Colts, so efficiently did he wrestle the sheep into position while carefully shaving off the thick coating of wool that cascaded to the floor. Nearby, sheep producer Marvin Gray delivered a running commentary, noting that in this state of being, the four or five pounds of wool removed from this sheep would deliver a whopping thirty cents a pound.

In other words, sheep shearing was not exactly anybody’s get-rich-quick scheme.

It was also noted that Herr wasn’t shearing the sheep down around its cloven hooves, which looked funny. As Gray put it, Herr would “leave its socks on.” For me, this turned out to be the second most surprising thing he would say during this demonstration. The most surprising thing?

If you’re interested in learning more about sheep-shearing, Gray advised the audience, “Google it.”

Google it? His words were a reminder that, besides the size of the sheep, things are always changing down on the farm. When I was a little kid watching the farmer on the “Captain Kangaroo Show,” Mr. Green Jeans never mentioned stuff like that.