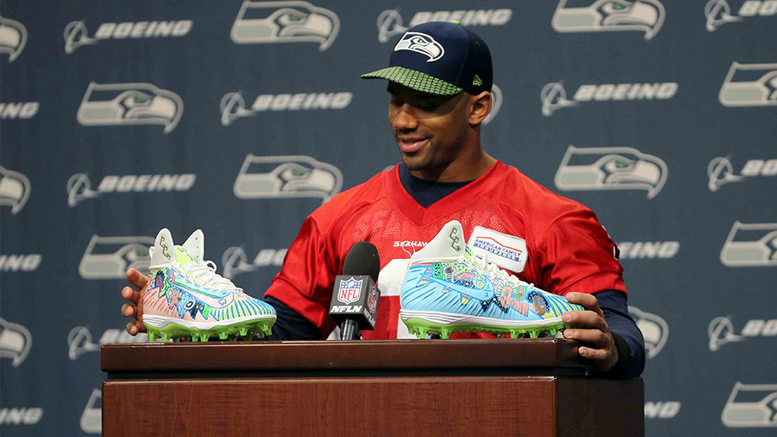 During one of his regular weekly press conferences in November, Wilson unveiled his cleats, telling reporters Sydney “did an amazing job with them.” (Photo courtesy of Seattle Seahawks)

“I’m sure my downstairs neighbor thought I was out of my mind,” she wrote on her blog.

Noland’17, was not out of her mind, but she was overwhelmed with emotion after receiving a text message from a colleague who worked for the Seattle Seahawks.

“Guess what? Russell Wilson chose you to design his cleats.”

The star quarterback for the Seattle Seahawks drafted Noland,to create a design on his shoes for the NFL’s “My Cause My Cleats Campaign.” The campaign is an effort by players to promote charities and non-profits that are near to their hearts.

As Wilson and his teammates routed division rival San Francisco 49ers on Dec. 2, his feet were representing the Super Bowl-winning QB’s own Why Not You Foundation and also Friends of the Children. Both organizations are focused on youth empowerment and pairing kids with mentors.

“The project meant a lot because I knew his causes involved children,” Sydney said. “That’s what I was most excited about. Our passions lined up.” 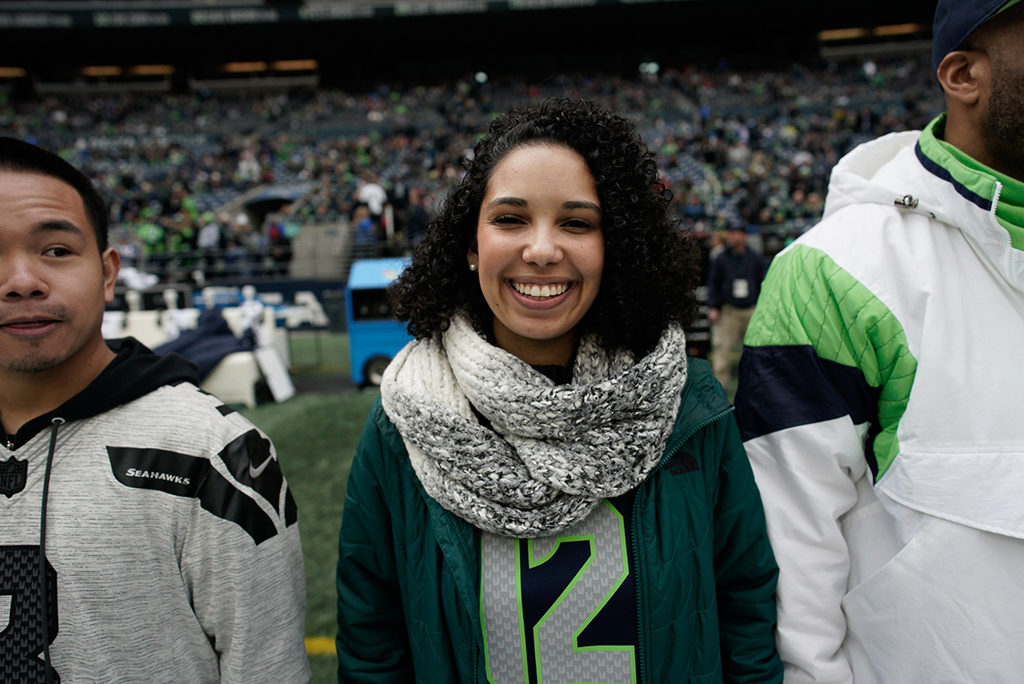 On a more personal level, though, Sydney’s involvement in such a high-profile project this early in her career represented validation. It proved that her whirlwind life in recent years, packed with tough decisions, sacrifice and risk, was paying off.

Taking a chance on Seattle

Originally from Indianapolis, Sydney thrived in the close-knit community of friends she made at Ball State, where she earned her bachelor of fine arts in visual communications.

Upon graduation, Sydney began looking for internships in the Pacific Northwest. Her husband, Shane, a cryptologic technician in the U.S. Navy, had received orders to move from Norfolk, Virginia, to Naval Air Station Whidbey Island in Washington state. The high school sweethearts had married in November 2016 and had lived apart while Sydney finished school.

“One day, the Seahawks popped up,” Sydney said.

She had always dreamed of working in sports, so she applied for the internship.

A month later the Seahawks emailed Sydney to ask if she could meet a representative for an in-person interview.

After completing the cross-country road trip with Shane, Sydney learned that the team would have allowed a teleconference interview. Nonetheless, the ambitious young artist made a positive impression. Minutes after leaving the interview, the team called her cell phone. She was hired.

During her internship, she also moved out of her comfort zone of digital design, developing creative ideas “through illustration, hand-skills, and through other non-digital means,” she said.

After the Seahawks, Sydney worked as a graphic designer for the University of Washington and as a freelancer.

Sydney designed Wilson’s shoes as a freelancer. A colleague from her internship asked Sydney to apply for the project. The team was interested in recruiting local artists, especially women of color, like Sydney.

Sydney chose a colorful design. Children with a bright future should be represented with bright shoes, she thought. She also had instructions from Wilson to draft a design that reflected cultural diversity. 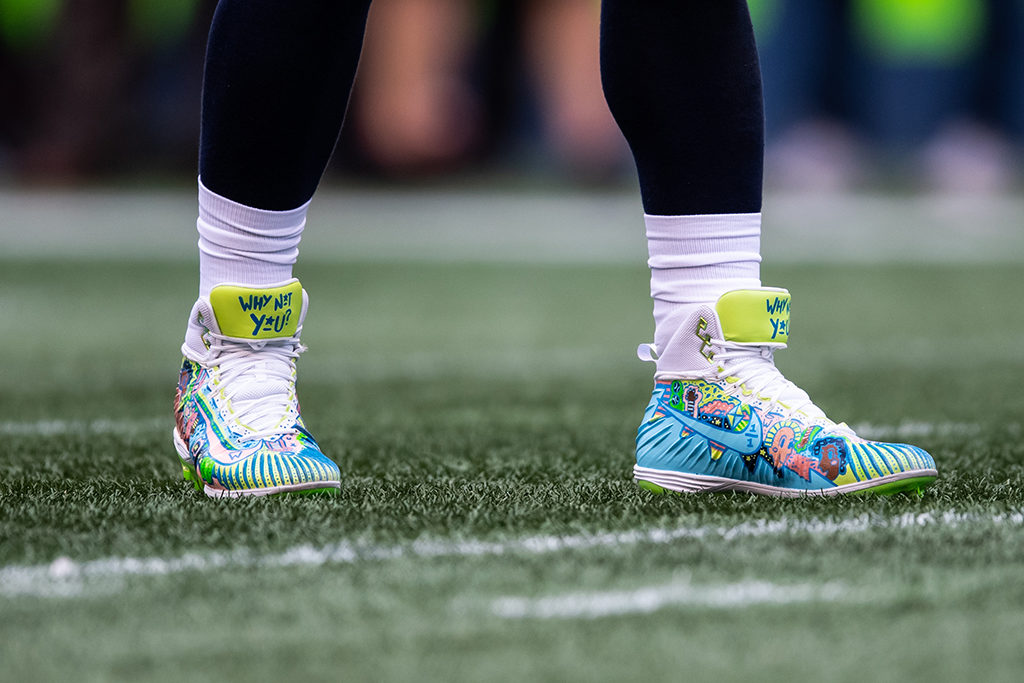 After her initial meeting with Wilson, Sydney visited the Seattle branch of Friends of the Children. “I met with a handful of kids, ranging from elementary to high school, in order to gain inspiration from them while they worked on a little project of their own — decorating their own pair of shoes with their mentors.” The kids later had a chance to show their shoe designs to Wilson in person.

In creating her final design, Sydney was surprised by an unexpected challenge: all the cleats’ various materials, from plastic to leather, absorbed paint differently. At one point, she almost panicked. “I thought I was going to ruin his shoes and it would be on television and my career was going to be over before it started.”

Instead, the shoes were a success. During one his regular weekly press conferences in November, Wilson unveiled the cleats, telling reporters: “Sydney (Noland) was the designer. She did an amazing job with them.”

“You have so many different colors on here,” the quarterback added, “and it’s really just to highlight the uniqueness of the world (and) the uniqueness of children … not just in our city in Seattle, but also the Pacific Northwest and across the country and really, anywhere in the world.

After the game, Wilson’s Why Not You Foundation sold the shoes in an online silent auction fundraiser. The winning bid was $4,750.

A random kid from Indiana

One of Sydney’s Ball State mentors, Shantanu Suman, an assistant professor of art, said students like Sydney inspire not only their juniors and peers, but also their educators.

“All of us in the visual communication program at the School of Art are incredibly proud of her achievements,” he said. “I know that her professional journey has just started and luckily I have a ticket to the front-row seats.”

In December, the Seahawks asked Sydney to come back full time as a digital media designer. She started her new job in January.

“All of this is definitely unexpected,” she said. “I’m just so grateful that the Seahawks even took a chance on me. I was a random kid from Indiana that drove all that way for the first interview. They took a chance on me and I’m forever grateful for that.”