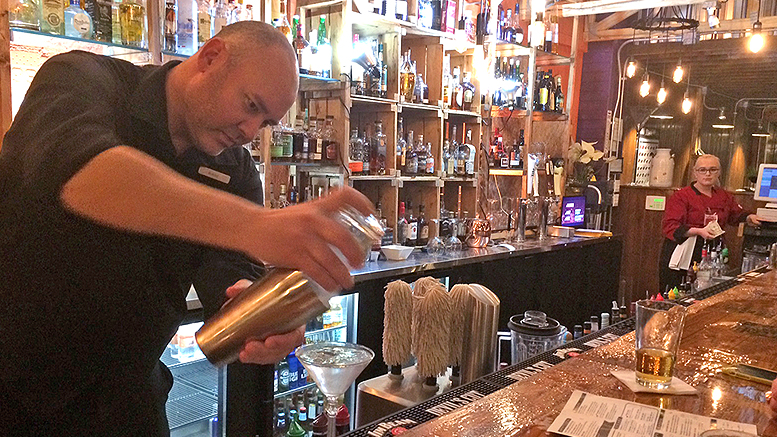 Where we were, precisely, I forget. It may have been a hot fried-chicken joint where the burn in that crispy bird left me happily gasping. It may have been the sushi place, where you lifted your selections from the tiny flatcars that passed your booth on miniature railroad tracks. Or it may have been the traditional Mexican place, which answered my pressing question, “How does a grasshopper taco taste?”

What I do remember is that it was all in Nashville, Tenn., which I soon came to regard as a food junky’s paradise.

Truth be told, Muncie probably hasn’t thrown Nashville’s Chamber of Commerce into a blind panic over our rising culinary fortunes yet. But happily, when it comes to cool, independently-owned eateries downtown, we’re working on it.

As it has been for years, Vera Mae’s Bistro remains a bastion of fine food and coolness, a feast for the eyes and sometimes the ears, and invariably the palate. For Nancy and me, it’s always been our special “go to” restaurant, and not just because my late Mom’s name was Vera Mae. When our favorite waitress, Helen, comes to take my order, she always remembers it’s the dill-crusted cod, and I walk out looking forward to coming back.

The fact that owners Kent Shuff and Steve Fennimore have stuck it out, offering a fine-dining experience even when downtown Muncie didn’t have a helluva lot to commend it, makes Vera Mae’s statewide reputation well-deserved.

Now, just down the block on Walnut Street, we’ve also got Ron Lahody’s “Trust Your Butcher” Steakhouse. On a recent Saturday evening visit with our good friends and fellow in-laws, Tom and Alicia Kovach, the place was packed, the energy level through the roof. The dapperly-dressed Lahody, a Marine Corps button proudly pinned to his lapel, circulated among his diners, looking like a man very happy to find himself in the restaurant business.

All four of us dined on filets, which were delicious. But for the record, when my buddy Lohren Deeg went in to try a burger, he relished it just as much. Naturally, I then returned to check out the burger myself. Sitting alongside Jama and Steve Gaddis, I was equally happy with it. Meanwhile, a couple Kettle One vodka martinis left me happily grinning like the goofball I am.  Plus the fetching, sort of cabin-like  look of the place lent it a warm, convivial glow. 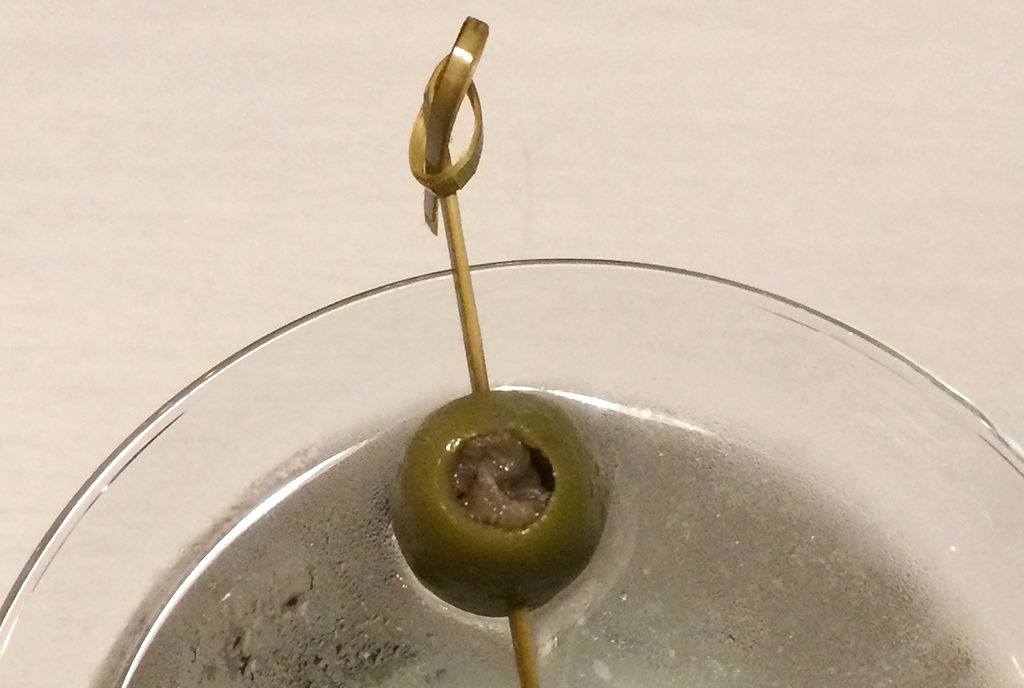 A birds-eye view of an anchovy-stuffed olive. Photo by: Nancy Carlson

Maybe a quarter-mile to the east, you could bet Neely House was just as packed. There is nothing industrial-looking about this restaurant.  During a soft-opening a few months before, manager Russell Irving had escorted visitors around this beautifully restored home, a place fairly dripping with vintage class and paintings. We’ve been there a couple times for its outstanding Sunday brunch, the huevos rancheros and Neely House’s take on Eggs Benedict definitely working for us. Friends who have been there at later hours say the same about their dinners.

Fine as this place is, the restrooms – located in an outhouse, of sorts – are just as cool.

Shoot west a half-mile or so from Neely House and you’re at Osteria 32 (pronounced: Oss-tare-EE-ah, meaning ”tavern” in Italian). It’s another bright spot on Muncie’s downtown – or at least near downtown – culinary scene. Drive by its Kilgore Avenue location across from Beech Grove Cemetery, and this place, the site of an old Hardee’s from years ago, doesn’t look like much. But the fact is, it’s a fine Italian restaurant with chicken dishes that have left me hollering  “Mamma mia!!!”

Well, left me wanting to holler “Mamma mia!!!” More to the point, owner/chef Dan Stackpoole is now serving up some very reasonably priced pizza.  What kind of pizza? I’d call it “killer” pizza, as the large deep-dish we recently tried left me babbling like a grateful religious convert talking in tongues.

So now we’ve got all those cool places in or near the city center to choose from. But wait! Like the guy in the Popeil Pocket Fisherman ads used to holler, there’s more!

Elm Street Brewing Company remains another relatively recent addition. I’ve enjoyed some great beers and food there. While I have yet to sample this particular dinner, should I ever be sent to the electric chair, Nancy is under strict orders to have Eric Jones ship me a last meal of Elm Street’s barbecued meatloaf and deep-fried deviled eggs.

There’s Thr3e Wise Men. I like its mission of helping others, and I like its food. Nancy and I especially enjoy splitting its big honking salads, something I always recommend out of guilt whenever I’ve eaten fifty or sixty Oreos the day before.

Maadi Grill in the Rose Court Building? It remains another very agreeable option for dining in or carrying out. Its pan-Mediterranean fare rocks, as again attested to by my pal Deeg, who’s kind of a walking, talking Michelin Guide to Stuff Guys Should Stuff Their Guts With. The same holds true for  Tuppee Tong Thai, Sue’s Thai Kitchen, Harmony Café with its intriguing small plates, and my buddy Manuel Rodriguez’s Casa del Sol, my one-stop shop for chicken and chorizo. And hey, is the inimitable Amazing Joe’s and its life-changing grilled tenderloin downtown? It’s close enough for me! Meanwhile, there’s no doubt Savage’s Ale House is downtown. A true success story authored by my friend Joel Savage, I have never been served anything but excellent food there, and great beer to wash it down.

And then there’s another personal favorite downtown: Twin Archer Brewpub. Every time I’m in this place, which is owned by Jake Baldwin, Shane Roberts and Scott Limbird, I am delighted. I always sit there drooling until they deliver my deep-fried pickles which, no lie, are the best I’ve ever eaten. Trying to sleep at night, I don’t count sheep jumping a fence anymore. I count Twin Archer’s deep-fried pickles jumping a fence, then falling into my open mouth every time I snore.

All that explains why things are looking way up downtown.

But one more thing, if I may. Don’t forget what my buddy Caleb Churchill has going with Pete’s Bar and Grill. Sure, nabobs of negativism will say, “But, Ace, isn’t that way the heck out in Albany?”

Well, yeah, it is now. But an elemental understanding of plate tectonics teaches us that weird junk inside earth is always shifting. So if we’re ever rocked by that earthquake already nicknamed “The Big One,” there’s a chance Pete’s could end up on the north end of Walnut Street someday.