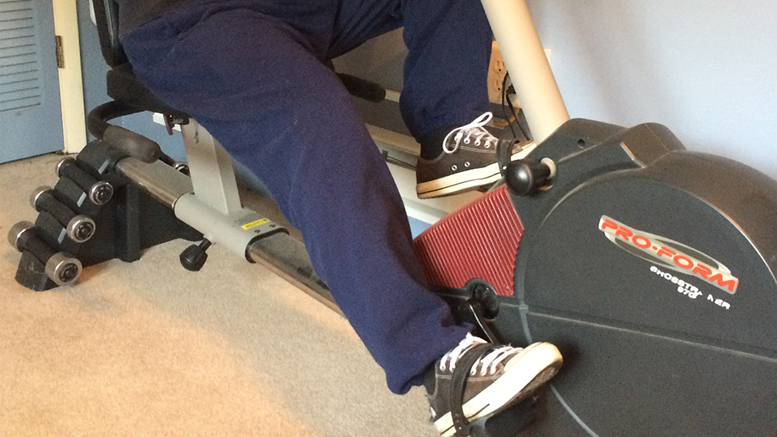 Yielding to abject feelings of guilt and shame about my woeful physical condition, on New Year’s Day I began riding my stationary bike.

In those intervening years, I can’t tell you how many times I told myself, “Why don’t you just get rid of the stupid thing,” but it didn’t happen. In this, it was much like my fancy compound hunting bow, which I had wisely bought for protection from bears during my Davy Crockett-phase, while living in the wilds of suburban Yorktown. I kept it for years, even though I forgot to buy arrows for it. Had a bear actually threatened to eat me or my wife and kids, I’d have had to shoot it with ballpoint pens.

But just like that bow, stationary bike-wise, I kept having this nagging feeling that maybe, someday, it would come in handy.

Anyway, when I finally decided to ride it on New Year’s Day, I knew I could never stick with just pedaling that thing in my man-cave. Instead, needing incentive, I pondered tying a cold beer and twin-pack of Hostess Suzy-Q’s to a broom handle placed before me. You know, to replicate the old carrot-and-stick trick. The thing is, I knew darned well that within twenty seconds, I’d be guzzling the beer to wash down all the gooey Hostess Suzy-Q sludge coating my throat. This after what amounted to half-a-calorie’s worth of pedaling.

So then I thought, why not use your imagination? Just envision yourself under blue skies riding on a beautiful country road, coasting past fields of placid cows and rainbow-colored wildflowers. All this while you’re gracefully gliding up and down gentle hills and rounding scenic curves, with the cool breeze flicking the sweat beads from your forehead.

This actually worked for nearly three entire minutes. Lost in pastoral thought, I pedaled steadily along. But then something shimmery entered my imaginary field of vision off to the side of the road, far ahead. Pedaling harder, it slowly came into view.

Oh sure, this was all just a mirage. But I was already hopping off my stationary bike to grab my car keys and drive to the nearest real ones. And why not? In under four minutes of steady pedaling I’d already worked off … what? Eight calories? Nine? So how many calories would there be, my mind began calculating, in a large Royal Feast pizza, a Salted Caramel Truffle Blizzard and a bag of ten White Castle sliders with cheese?

When the estimate came out to something around thirty-thousand, I got depressed. So much for losing weight through my imagination …

Finally, I settled on a solution to make riding my stationary bike palatable. Music! Of course, this was a learning experience, too. Turning on the television set, the first band I encountered was Lawrence Welk and his Champagne Music Makers. Now, I had watched lots of Lawrence Welk when I was growing up, my folks having considered him their generation’s Jimi Hendrix. But take it from me, the last thing you wanted to hear while attempting to pedal your butt off on your stationary bike, was Irish tenor Joe Feeney singing “Danny Boy.”

Not only was the funereal pace dirge-like, but if you had any Irish blood, you might break down and start sobbing all over your handlebars.

No, Welk wouldn’t cut it. So grabbing my phone and my headphones, I soon had the late, lamented Lemmy Kilmister from Motörhead bellowing “Ace of Spades” in my ears. Trying to keep up with him was its own challenge, though. My stubby little legs were pumping so hard, centrifugal force kept them flying from the pedals, causing my kneecaps to ricochet off my belly blubber. This, obviously, wasn’t going to work, either.

And then I remembered Toto. No, no, not the movie mutt from “The Wizard of Oz.” Toto the band. Dialing into their mellow hits “Africa” and “Rosanna,” I found the songs perfectly timed to keep me faithfully pedaling along in a grown up, responsible fashion. In fact, with Toto playing, it turned out I had been pedaling for nearly twelve minutes after what seemed like only two hours!

That was smart. Right?

So, to review. If you are going to start riding your stationary bike, a) don’t tempt yourself with cold beer and Suzy-Q’s, b) ditto for Royal Feast pizzas, Blizzards and sliders, and c) don’t attempt to pedal to Lemmy from Motörhead singing “Ace of Spades,” or to Joe Feeney singing “Danny Boy.” Not without having a hanky handy, anyway.

Do listen to Toto, though, and you’ll eventually get no place, which is exactly where you’re headed.