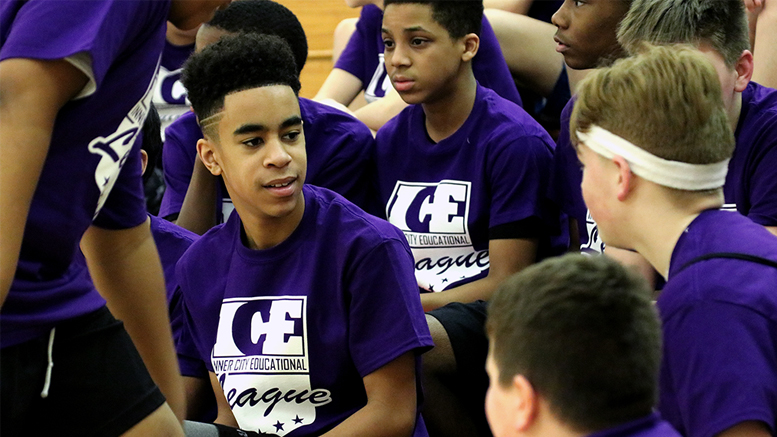 The 2019 ICE League launched Saturday with competitive drills and a character-filled, inspirational message from Amber Stocks for 93 Muncie and Burris students who tried out during ICE League Draft Day.

Academics drive the ICE League, which sets the grade-point average bar at 2.5 and higher for students who wish to fully participate in the basketball League. The League is the vision of its founding funder, the Ball Brothers Foundation, and is overseen by Project Leadership who partners with four local centers – the Boys & Girls Club of Muncie, Buley Center, Ross Center and YMCA.

Draft Day is the official start of the season and takes place at Muncie Central High School.

“This is a day where there are many moving pieces,” said Kaye Harrell, Project Leadership Community Outreach Coordinator, who oversees the general organization of Draft Day and all that entails – coordination of registration, hospitality room, draft drills, medic services and social media team. “It takes a lot of people to run this one day. Because there are good people in those spots, it works.” 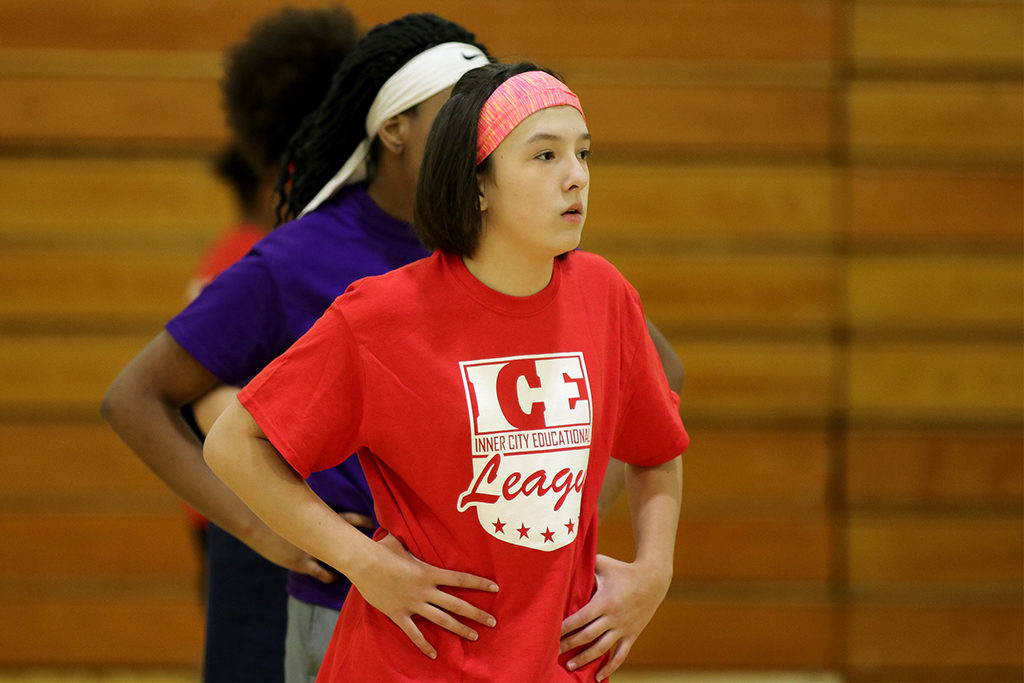 “We’re looking forward to the next two weeks to see how the League starts,” said Tom Lyon, ICE League Co-commissioner. “There’s a lot of enthusiasm.”

“I’m excited to be a part of the ICE League from this side of organizing it,” said Anderson, who accepted a Co-Commissioner role with the League this season. Anderson was a part of the inaugural Season 1 of the ICE League, serving as a coach, a role he continued into Season 2 as well. “There was a lot of energy and excitement on the coaching side of the League, but being on this side has a similar excitement and a different intentionality.”

One of a kind. That’s how Qiana Clemens, Chief Operating Officer of the Boys & Girls Club of Muncie describes the ICE League.

“The League is the essence of what the student athlete should represent,” Clemens says, emphasizing the importance of academics and character messaging presented by the League.

“A student who knows these values at a young age will be a student who is set up for success for the future,” Clemens said. “These kids represent our community, our state. The continuation of the League is vital for the community because the kids are our future.”

The diversity of the student athletes who participate in the ICE League is another asset, Clemens said.

“The ICE League teaches our kids to play with others who may not come from where they come from,” Clemens said of the League, which encourages participation at local community centers. “Exposing kids to community centers helps to grow the social and emotional well-being of our students.”

Jacquie Hanoman, Executive Director at the Ross Center, Muncie, is in the fifth year of participating in the ICE League where her center hosts and sponsors a girls’ and a boys’ team. Jacquie identifies three areas of the ICE League that are important to her:

“I really enjoy the collaboration between Project Leadership, the Ball Brothers Foundation and the centers,” Hanoman said. “Second, I love to see the kids blossom through mentoring.”

The most important part of the League, Hanoman said: “The focus on academics with sportsmanship.”

Sixth grade Northside student Lexi Wilson was one of the first arrivals Saturday morning for the ICE League Season 5 Draft Day at Muncie Central High School. The tryout was her first ICE draft experience. Her mother, Ashley Wilson, stood nearby in support of her daughter who she described as shy and intimidated by participating for her first time.

“Lexi was non-responsive when she was first born, and I was told by the doctor that she would struggle every day of her life,” Ashley said. “This kid has been the total opposite.” Lexi’s mother said she supports the academics focus on the League. “I absolutely love it,” Ashley said. The message aligns with the conversation Ashley has with Lexi every morning before school: Grades are important. Ashley said she hopes that Lexi’s first-year experience with the ICE League will build her confidence as well as her skills.

Professional athlete, coach and consultant Amber Stocks credits them for changing her life. And it is those two words she focused on in her inspirational address to Muncie and Burris student athletes sitting in the bleachers at ICE League Draft Day at Muncie Central High School on Saturday. 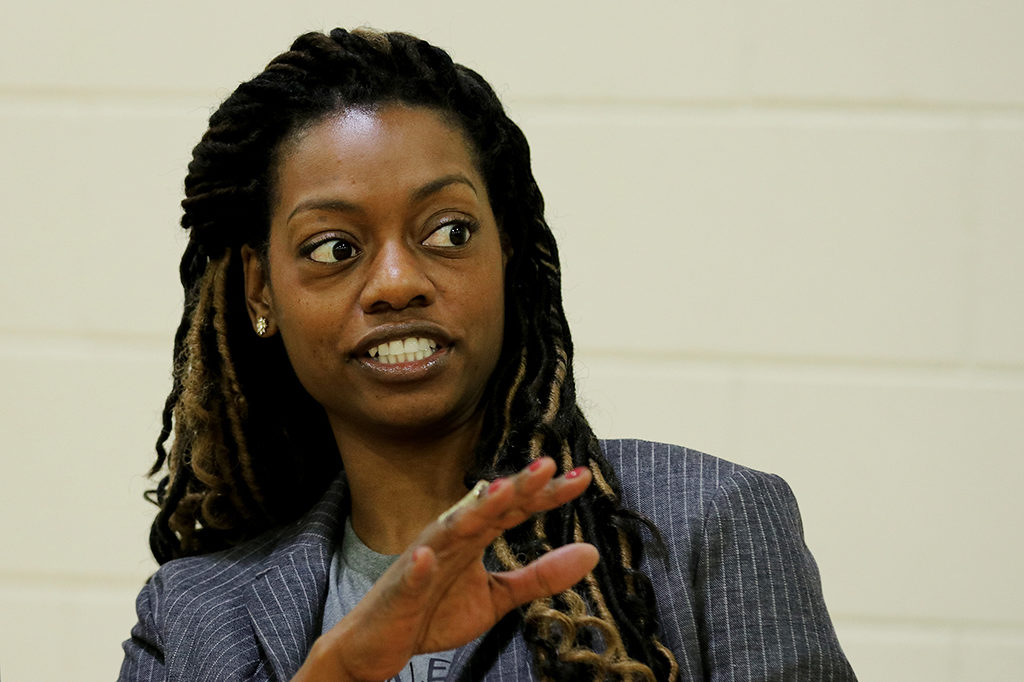 Those two words: Preparation and opportunity.

Amber shared that at the age of 9, she saw her very first female basketball coach. She asked her dad: “How does she have time to coach?”

His response: “That’s her job.”

Amber remembers asking: “You can get paid for coaching?”

And that’s when she knew what she wanted to do with her life: Coach.

She began playing basketball in elementary school and kept right on playing. As a freshman, she recalls: “Six of the seven of us on the team were moved up from JV to varsity.” Amber was the lone player who was not. As Amber relays the story to student athletes trying out for Draft Day, she prompts them: “Say preparation.”They do.

And Amber did in her life, she explained, putting in extra hours and practices to hone her skills.
By the 10th grade, it had paid off. She was a starter on the varsity team.

From high school, preparation and opportunity were Amber’s close friends as she accepted her first coaching job at Notre Dame, trained with the Florida Gators, coached at the University of Tennessee, and eventually went on to work with the WNBA and the Chicago Sky and LA Sparks.

“There are two things I want you to remember when you think about preparation and success,” Amber said and asked for a volunteer from the ICE players to come down to the gym floor and open a bag.

Its contents: A set of binoculars.

“This helps you see things that are far away and bring them closer,” Amber said. “It helps bring your goals closer into your line of vision. Whatever you want to do, keep it right up here in front of you.

Those different aged versions of ourselves may seem a long way off, she added, but advised the students that those years are closer than they appear.

“It never ends,” Amber said as she asked for two more volunteers from the student athletes to reveal the second item she brought with her to Draft Day.

It was a massive rubber band.

“This rubber band is you,” Amber said to the students and talked about the importance of failures and our response to them.

“Things will stretch you,” she said. “And just like the rubber band when it stretches, you have to be able to bounce back.”

Where To Watch a Game

ICE League Season 5 games begin on Monday, Feb. 11, and end on Thursday, March 14. For a full schedule, visit iceleague.org. All season games will be played at Muncie Northside Middle School. ICE League semi-final games are March 20 at Northside. The Championship games will be March 21 at Muncie Central High School.