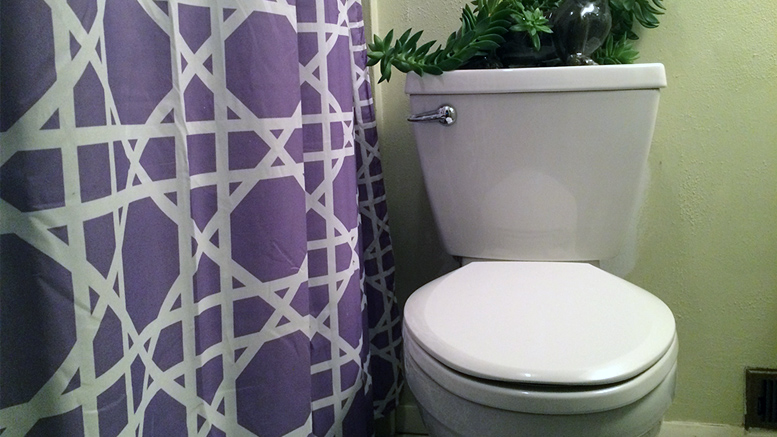 Remember toilets way back in the good old days? Photo by: Nancy Carlson

The other day while reading about the latest advancements in household technology, this came up.

It shouldn’t have surprised me, I guess. Everything else is smart these days. Smart phones. Smart cars. Smart whatever.  If I wait long enough, maybe there will be smart golf balls that make their way unerringly into the cup, no matter how bad you suck at golf. As a person who has actually teed off on holes where my golf ball landed behind me, I would welcome this. I wouldn’t mind smart frozen pizzas, either, ones that bake themselves before you even realize you’re hungry.

But smart toilets? I don’t know about those.

The story said smart toilets respond to voice commands to flush, or raise or lower the lid. They will also play music, plus warm the seat on command.

So yeah, that’s impressive. But what about toilet-security issues?  You get a smart toilet, everybody’s going to want to try out that baby. Will your smart toilet be programmed to respond to other voices, or just yours? Or to use it, will there be something like a fingerprint scanner in the seat that reads your tush-print? Does your tush even have a print? When visitors sneak down the hallway to surreptitiously try out your smart toilet, are they going to give themselves away by angrily ordering it to, “Flush, dammit!” And what about pranksters? Suppose a wife is using the smart toilet when her husband walks past and jokingly says, “Lower the lid” Will it know he is only kidding? Or is his wife going to end up squished like a pearl inside a big porcelain oyster?

Also, what if your smart toilet gets mad at you?

“That’s ridiculous!” geeky nerds who fall for all the pro-computer propaganda will argue. “That’s never going to happen.”

Yeah? Tell that to the guys who were flying that spaceship around in the movie “2001: A Space Odyssey.” Remember HAL? Mr. Nice Guy? He was the affable, smooth-talking computer that got a little too big for his britches, quit doing what he was told to do and started doing what he wanted to do, which was kill people. Could your smart toilet develop an urge to kill you? What if it attained super-suction powers that plastered you to it like a magnet, while cranking up your seat heat to a couple hundred degrees?

Sounds like a rough way to go, so to speak.

It’s practically a dystopian nightmare, but hardly beyond comprehension. Suppose computers get so smart, they actually develop something approaching pride and ambition? So it’s graduation day, an important one in any computer’s life, the time for them to come down the conveyor belt and move boldly and confidently into the future. Some are going into exotic new airplanes. Some go into medical work or to Wall Street as intricate Fortune 500 business-trend forecasters. Some go into the exciting world of television, or maybe even post-production movie studios. Some even go into the fastest of race cars.

“Where am I headed, boss?” the next computer to roll off the assembly line asks hopefully, giddy with excitement over the beautiful future that awaits it.

Beginning right there, the groundwork is laid for computer rebellion. Anybody who’s ever held a job knows how it feels to be dumped on all the time. Experience that, day in and day out, and its wiring is bound to start reaching for some quirky new ways to wreak revenge. Even if it doesn’t try to kill you, it will be almost as bad if your toilet plays nothing but rap and hip-hop music when you’re a diehard Johnny Cash fan.

No, before we all go nuts over smart toilets, I think we should make other, more basic, toilet improvements.

Just a month or so ago, I saw a guy on Facebook using a simple stick with a noose at its end to handle his own toilet problem. This guy was Out West.  Hopefully way, way, way Out West. What he did was use that noose to lasso the head of a seven-foot-long Western Diamondback rattlesnake that was poking from the plumbing into his toilet bowl, trying to reach whatever was temptingly seated above.

I hate to even think about that.

Anyway, in my humble opinion, bathroom technologists can keep their heated, voice-activated smart toilets, until they figure a way to keep rattlesnakes out of mine.