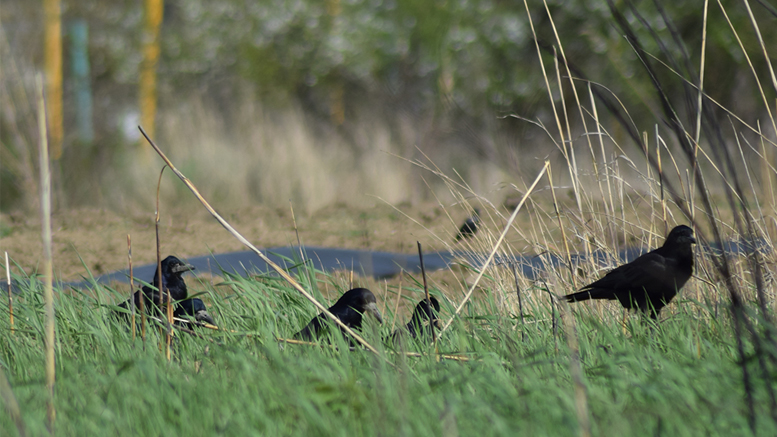 Crows may be game birds, but they aren’t good eatin’. Photo by: Storyblocks

My wife Nancy and I have been off-and-on subscribers to the magazine Outdoor Indiana for a number of years, which also means we get its annual Department of Natural Resources calendar.

This calendar is very handy for pointing out things you otherwise might miss.

Like, without this calendar, I wouldn’t know that Feb. 25 is the day skunk cabbage will presumably be blooming up in Pokagon State Park. So if you find regular cabbage bland, you could just buzz up to Pokagon and – unless it’s a protected plant, which for all I know, it might be – grab yourself some special cabbage to whip up a batch of skunk slaw.

If you want to pull a practical joke on friends afflicted with bat phobias, March 23 is the day to stand them blindfolded before the entrance to a bat cave. When you rip off their blindfolds and yell, “Surprise!” thousands of bats should be emerging from winter hibernation. Think of the fun! May 13 will be Snake Fest at Brown County State Park, guaranteeing that I will be joining thousands of other Hoosiers in staying as far away from Brown County State Park as possible.  Come Oct. 25, dog-running season ends, though I’m pretty sure our hoodlum mutts Toby and Jersey will continue jogging around the back yard. And coming Dec. 13?  The late crow hunting season opens.

Reading that one, though, I thought, say what?

Now, I don’t hunt, but I did go hunting for bunnies once, and blasted the living crap out of an empty Budweiser can with my 20-gauge shotgun.  As for people who abuse dogs and other animals? I’d be perfectly happy to hunt them down and blast them in their assets. People who eat the animals they kill, or share them with others who eat them? I can’t knock them. I think vegetarians are fine folks. But I love cheeseburgers, meatloaf and barbecue, so I pay others  to do my killing for me.

Thinking back, I tried to remember if I’d ever heard anybody say, “Whoa, that is some tasty crow!” Or, “Myrtle, I just have to get this crow recipe from you!” Or, “Honey, these crow croquettes put my mom’s to shame!”

But nobody came to mind.

Why, I wondered, would folks hunt crows? Did reading Edgar Allan Poe’s eerie “The Raven” in bed one dark and stormy night leave them huddled, shivering under their covers, desperately fighting the need to pee? Did they develop a rabid crow hatred as impressionable youngsters when, counting on  Donald Duck cartoons coming on TV some afternoon, Heckle and Jeckle showed up instead?

But then I went online and found out crow hunting is actually a thing. For some hunters, it’s a chance to sharpen their birddogs’ retrieval skills before duck season arrives. Some use dead crows for fertilizer. Others, I suppose, just get off shooting crows out of the sky, which confounds me.

But no crow hunter, it soon became apparent, wanted to eat them. Crows are carrion eaters, after all, and what goes around comes around, especially digestively speaking. Given the website I was looking at, you could almost read the crow hunters’ revulsion at the very idea of eating crows, though a few recalled old timers in tougher times who had done so. Another crow hunter, obviously a former English major, wrote he did so “only in the colloquial idiom form.”

Like him, I have often “eaten crow” in my time.

Anyway, looking up “crow recipes,” I found some that the cooks considered palatable. But the first thing I encountered took the proverbial cake. The chef was a contestant on a British cooking show and, frankly, kind of a weirdo. “I’m going to cook a crow,” he nervously explained to the judges, then specified, “A dead one.” It was good he cleared that up, before he went on to say this crow would be part of a tomato and asparagus salad prepared with fennel.

“Cooking doesn’t get tougher than this,” a skeptical judge warned him.

Twenty seconds later, the cooking part having been mercifully edited from the video, this contestant was pictured sweating profusely as he showed off his dish. On the plate before him was a globular, bean soup-colored mound of something sort of resembling food. Mostly it looked like food that a few minutes earlier had been percolating in his stomach.

As a final, fitting, artistic display of creative food presentation, he poked a black, wrinkled crow’s foot into the middle of the mound. Poe himself couldn’t have envisioned a freakier, more disturbing, less appetizing  image.

For me it was a definite reaffirmation that when it comes to crow, I prefer mine in the sky, thank you very much.

Listen below to hear John talk about his article with WLBC’s Steve Lindell.